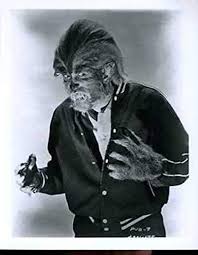 
Despite the risible title, I WAS A TEENAGE WEREWOLF may well be the most interesting werewolf-film of the fifties. Though THE WOLF MAN toyed with the notion that Larry Talbot’s curse might’ve been no more than a psychological delusion, TEENAGE shows psychology as the means of unleashing, rather than banishing, the beast within.

The “Ralph Thornton” who supposedly authored the script was just a pen-name for long-time screenwriter Abel Kandel (whose Rumanian extraction has some impact on the storyline) and the film’s producer Herman Cohen. In contrast to THE WEREWOLF, Columbia’s slightly earlier wolf-man outing, this teenaged were-beast plays it both ways, alluding to both science and folklore. Said teenager is Tony (Michael Landon), who from the beginning seems afflicted with bouts of irrational rage. Late in the film, Tony’s mild-mannered father suggests that the youth has suffered from growing up without the feminine influence of his mother, who died years ago. Yet the true culprit seems to be that old devil testosterone. Tony feels constantly challenged not only by his peers in high school, but most of the representatives of authority, be it his father, the trepidatious parents of Tony’s steady girlfriend, or an understanding cop who warns Tony to mend his ways before he ends up in stir.

Ironically, it’s the nice-guy cop who recommends that Tony consult a local headshrinker, one Doctor Brandon (Whit Bissell). Brandon is vaguely connected to the town’s local Air Force base, which has no real relevance to the narrative except that it makes the doc sound more like a hardcore researcher and less like the sort of Park Avenue alienist whose fees would be outside a teenager’s means. Tony has zero desire to have his head shrunk, but finally admits he has a problem when, during one of his attacks on a peer, he accidentally swats his faithful girlfriend. Tony thus volunteers for the psychologist’s examinations, gaining a certain amount of sympathy from the viewer despite his aggressiveness.

Unfortunately for Tony, Brandon is one of a long line of mad scientists, and even has a lab assistant who warns him about overreach while doing nothing to stop the mad science. Whereas some forties types wanted to create supermen in order to avert war, like George Zucco in THE MAD MONSTER, Brandon is antsy about a world where nuclear power could obliterate all life. His rather incoherent solution to this is to use drugs and hypnosis to regress humanity to the status of their primitive forbears, though he seems to have no idea as to how this would play out on a world scale. In truth, when he says late in the film that he wants to behold “the secrets of creation,” he’s probably being truer to the motives of his Frankensteinian predecessors.

In any case, Brandon recognizes that Tony’s perpetual anger marks him as a perfect subject. Though Brandon does not mention the idea of a genetic throwback, possibly there’s some notion that Tony symbolizes caveman existence, when all nature was “red in tooth and claw.” The script doesn’t explain what this has to do with werewolf lore, though Brandon seems to make one lore-allusion by claiming that Tony has a “telltale mark” on his body. The hypno-treatment seemingly regresses Tony to the days of his ancestors, after which he starts morphing into a big-fanged wolf-man at night. It may be significant that his only two victims are not authority-figures, but his high-school peers, though in the end the Teenage Werewolf finally does manage to wreak vengeance on Brandon and his assistant, who are after all representatives of “bad authority.”

Gene Fowler Jr. keeps the tension up despite the many talking-heads scenes, though some of the credit for viewer-interest must go to Landon’s nuanced portrayal of Tony. While gypsy soothsayers would have been out of place in Midtown U.S.A., Kandel provides a back-door version of the superstitious peasant by having a police janitor relate the history of “Carpathian” werewolves. The script may have meant to suggest that such legends were also the result of primitive regressions, but if so the idea is not exploited. 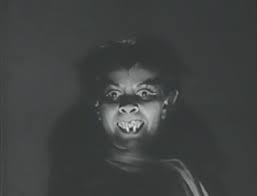 The same basic concept does, however, appear in the writing-duo’s follow-up, BLOOD OF DRACULA, this time lensed by the (less-talented) Herbert L. Strock. In some ways BLOOD shows greater potential than TEENAGE, but turns out to be a case of too many concepts spoiling the broth.

Teenaged Nancy Perkins (Sandra Harrison) is supplied with a much more resonant motive for rage than testy Tony. At the film’s opening, her father and stepmother-- who have gotten married within six weeks of the passing of Nancy’s mother—drop Nancy off at a girls’ boarding school. Later in the film, the headmistress opines that most parents use the school as a means to abrogate the responsibility of parenting, but the Perkinses never come back into the film to reap any penalty for their immoral actions (which may well include Mr. Perkins messing around on his late wife prior to her death). Headmistress Thorndyke supplies the voice of benign authority and genuinely seeks to welcome Nancy to her new routine, stressing that the institution is not a correctional prison, but a ladies’ preparatory school

Like Tony, Nancy has a series of fractious encounters with her peers, a pack of semi-mean girls who style themselves “the Birds of Paradise” (presumably a reference to their feminine charms). Refreshingly, the young ladies who invade Nancy’s room and paw through her belongings are just as obnoxious as any masculine intruders, though none of them are anything more than spoiled brats. These half-dozen chicklets seem to be the only other occupants of the school, which is presumably why Mrs. Thorndyke asks their leader Myra to play nursemaid to the new girl. The Birds don’t seem to have a consistent attitude toward Nancy, bullying her once or twice but still allowing her to come to their parties, replete with boys who sneak onto the grounds. For her part, Nancy stands up for herself, but any rage she feels is tamped down by the fact that she has nowhere else to go.

Unfortunately, there’s a malign authority on the grounds, and she even has a name similar to that of the psychologist in TEENAGE WEREWOLF. Girl-gang leader Myra more or less steers the school’s chemistry teacher Miss Branding toward Nancy, though no malice seems involved. Myra’s relationship to Branding is never defined beyond the fact that the younger woman listens attentively when the older one gripes about how male scientists have failed to recognize her genius. Like Brandon before her, this mad experimenter also has a mad-on against the nuclear society. But instead of advocating total regression, Branding wants to unleash some sort of magical power that dwells within human beings, one that can dwarf nuclear power. To this end, Branding uses a possibly magical amulet to hypnotize Nancy, and then, like Brandon before her, just turns her victim loose on society to see what happens. (Maybe there’s a good reason no one respected her methodology…)

Again, East European folklore-motifs are worked in minimally: the amulet is supposed to be Carpathian, and after Nancy starts murdering her peers, one of the coroners mentions that he once knew a Carpathian who related a lot of vampire lore. Nancy-- who during the night transforms into a mod-looking teenaged vampiress—does at least kill off one of the girls who tormented her, but her rage is not as pure as that of Tony the Werewolf. Like him, though, she does have guilty memories of her other self’s carnage, and has to restrain herself from more violence when her boyfriend becomes amorous. And BLOOD’s conclusion is pretty much the same as the earlier film: the victim turns on the evil scientist and they both die.

Though TEENAGE WEREWOLF is indubitably the better film, BLOOD OF DRACULA shows greater potential. One or two critics have argued for a lesbian subtext, though I think the evidence is spotty at best. A more ambitious script might have built up Branding’s supposed marginalization for being a woman, or, alternately, given Branding some resemblance to Nancy’s real enemy, the conniving stepmother. But then, a good script needs good acting, and none of the thespians here turn in more than adequate performances.


Posted by Gene Phillips at 12:20 PM
Email ThisBlogThis!Share to TwitterShare to FacebookShare to Pinterest
Labels: the marvelous