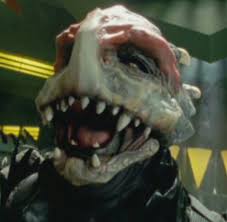 Though I have an abiding appreciation for the sheer wackiness of the POWER RANGERS franchise, I doubt that I’ll devote a lot more time to reviewing its many offshoots. Still, I got a few cheap thrills out of the MYSTIC FORCE incarnation, and so I took a chance on DINO THUNDER as well.

By sheer chance, I happened to choose one of the few serials that attempts a sort of rough “continuity” between the various Americanized adaptations, even if the original Japanese “Super Sentai” shows may not have had any such linkages. One epidose even provides a chronology between the various shows that had aired up to that time, and there’s a crossover with the characters from an earlier (and much duller) show, POWER RANGERS NINJA STORM. But DINO’s main accomplishment is to bring back the character Tommy Oliver from the original show, MIGHTY MORPHIN POWER RANGERS.

On that program, Tommy was something of a “bad boy” who provided contrast to the regular “clean teen” heroes. Since the actor playing Tommy was in 2004 almost twenty years older, this time Tommy appears as a member of the establishment, a science teacher who still has a penchant for tecruiting promising Rangers. He starts out with only three this time, two guys and a girl, who at first seem to have a little of the “Breakfast Club” rebel-vibe of the American POWER RANGERS from 2018. However, once the trio is called upon to defend Earth from the incurions of Mesogog—a humanoid with a dinosaur-head—the teens all get respectable jobs in a cyber-café whenever they’re not busy fighting Mesogog’s varios monster pawns.

As if anticipating the villain’s theme, Doctor Oliver’s specialty is paleontology, and all of the Rangers get various tinker-toy weapons somehow related to tyrannosaurs and pterodactyls and whatnot. The fight-choreography is adequate, but the main attraction remains the goofball monsters. Indeed, one of the standout episodes of DINO shows the three heroes watching on DVD an original (albeit dubbed) episode of the very “Super Sentai” show which provided much of DINO’s Ranger-footage. DINO’s scripts are also leavened with some decent original humor not dependent of nutty men-in-costumes. The show’s primary comedy relief, an ambitious girl reporter, loses her youth to one of the monsters. As if knowing that this condition will be reversible, she whines, “It’s not bad enough to be a woman in this business; now I have to deal with ageism!”

I don’t know how closely the English-language scripts mirror those of the Japanese show, but someone evidently decided to follow the template of MIGHTY MORPHIN, since DINO also has a “bad boy” who starts out opposing the good Rangers but ends up becoming their ally as “the White Ranger.” In addition, though in most of these serials the older mentor-figure leaves the fighting to the teens, Tommy, now “the Black Ranger,” battles alongside his students. Usually the acting on RANGERS shows is no better than it has to be. However, Jason David Frank brings a lot more dynamism to his scholastic butt-kicker than one usually expects, and so Frank pretty much blows the younger actors out of the water whenever he shares the screen with them. Since there are some episodes in which Tommy goes missing for awhile, and others in which he can’t get out of his black armor, obviously Frank wasn’t available for the whole series. Happily, he does come back for the wrap-up.

I give this show’s mythicity a higher average rating of “fair.” The show’s use of dinosaur-lore doesn’t register very strongly, but in the psychological department, it does sustain an intermittent “Jekyll-Hyde” theme, since, in addition to the two “bad-boys-turned-good,” Mesogog just happens to be a scientist who shares his body with a dino-creature.
Posted by Gene Phillips at 1:30 PM
Email ThisBlogThis!Share to TwitterShare to FacebookShare to Pinterest
Labels: combative adventures, the marvelous