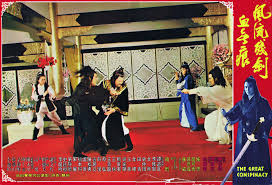 Though there are a lot of bad Hong Kong chopsocky films from the seventies and eighties, most of them are bad in an unambitious way. MASK OF VENGEANCE has one minor virtue: its badness results from an embarrassment of absurdities.

I’m sure no one, either in China or any other country, would have remembered this oddity long after its release. As of this writing it has just one independent blog-review and three short comments on IMDB, one of which compares MASK’s director Hsueh Li Pao to Edward Wood Jr. I’ve no idea if the film ever enjoyed video release, though only rather recently did it show up on Amazon Streaming, meaning that, in theory, a whole new audience could discover the film as occurred with the oeuvre of Ed Wood. That said, it’s not very likely that will happen, because most “good bad films” appeal to their audience by advertising the movies’ alleged pleasures with simple, straightforward plotlines.

No one would ever call MASK OF VENGEANCE straightforward. In its opening scenes it looks like it may be some sort of “martial tournament” flick, though oddly the tournament is devoted only to knife-fighting, which I strongly suspect is not a real thing. The master of the revels is a masked man who admits to the hero that he arranged the games in order to lure an old enemy, an expert knife-fighter, out of hiding. In addition, the masked man presides over what looks like a cult of masked knife-fighters, though there’s never any explanation of the cult’s purpose. The hero—named Tian in the opening scenes, though I believe he assumes two other names later—is searching for his lost father, and for some obscure reason elects to help the weird masked guy find his enemy.

The opening scenes are no better or worse than any other chopsocky of the period, though there’s a Wood-like touch in that Tian proves his martial skills by shattering the swords of the masked fighters with his tiny jade knife (never seen again in the rest of the film). But once Tian starts nosing around, dozens of barely explained characters cross his path, including a swordswoman (played by Shih Szu, famed for her appearance in LEGEND OF THE SEVFEN GOLDEN VAMPIRES) and some strange woman who claims she’s Tian’s wife (I think this is Nora Miao, once wife to Bruce Lee). I quickly lost track of the plot amidst all the confusing introductions, though there is one hilarious moment—which I for one would not blame on the English translators—in which Tian tries to identity himself to his father by pointing out a distinguishing mole. I believe the line was, “Look at my mole, Dad! Look at my mole!”

Toward the end Tian and all of his allies—which may include a father, mother, and sister he never knew—return to fight the masked guy in his cult-temple. Though it’s not exceptional fight-choreography, the villain distinguishes himself by fighting the good guys with primitive grenades and a metal glove with a spike-attachment. MASK might be most entertaining, even for dedicated badfilm lovers, if they just watched the opening and closing sequences, and took my word for it about the “mole” line.

Posted by Gene Phillips at 10:36 AM
Email ThisBlogThis!Share to TwitterShare to FacebookShare to Pinterest
Labels: combative adventures, diabolical devices (u), outre outfits (u), the uncanny