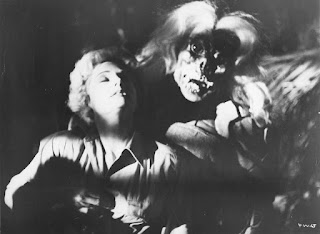 
Though in 1956 Edward L. Cahn directed one of the better B-monster-flicks of the decade in THE SHE CREATURE, his execution of VOODOO WOMAN the next year makes it seem likely that Lou Rusoff’s script did all the heavy lifting. This time, the writing-team of Russell Bender and V.I. Voss whipped out a knock-off of SHE CREATURE, even to the extent of re-using two of the earlier film's main actors, and Cahn did nothing more than crank the camera and cash his check.

Marla English, the former She Creature, plays the titular “Voodoo Woman,” though she starts out as Marilyn, a hard broad from the States. She and her equally crooked boyfriend somehow wind up in Africa, and like hundreds of scheming white people before them, they’re on the hunt for tribal gold. However, the primitive African tribe just happens to have its own resident mad scientist. In SHE CREATURE, Chester Morris played the over-reaching researcher, while Tom Conway essayed a support-role. This time out, Conway gets the dubious privilege of playing the guy who brings out the monster in the maiden. However, whereas Morris’ Doctor Lombardi justified his project in terms of evolution and reincarnation, Conway’s Doctor Gerald quests after his “voodoo woman” because—well, the script says that’s what he does.

For a production like this, no experienced viewer really expects the script to be accurate about voodoo, which only has very indirect roots in African religious practices. But one would think that even hacks trying to invoke “voodoo” for its buzzword value would come up with some supernatural menace that aligned with popular conceptions of the religion, even transplanted to Africa. Bender and Voss simply conjure up a tribe who happen to have some ritual that creates an invulnerable monster-woman, whose presence is somehow linked to a smoking hole in the ground. There’s no telling what Gerald thinks he’s going to do with this superwoman once he gets her, but he soon finds that the native women just don’t suit his vague purposes. He doesn’t seem to consider his wife as a possible subject, though there’s no love lost between them any more. Instead, when the two thieves show up, dragging along a local guide (Mike Connors) with them, Gerald decides that he’ll use Marilyn’s lust for gold to tempt her into becoming his experimental subject. She consents, and becomes a big black monster who eventually destroys the hubristic heel just as the She Creature killed her evil master. With the bad people out of the way, Gerald’s wife gets a chance at new romance with Connors’ noble guide.

The talky script insures that there’s nearly no action to get in the way, and though Conway and Connors submit decent performances of their crappy characters, the movie’s only saving grace is English’s portrait of hard-bitten dame Marilyn.

Posted by Gene Phillips at 10:40 AM
Email ThisBlogThis!Share to TwitterShare to FacebookShare to Pinterest
Labels: the marvelous