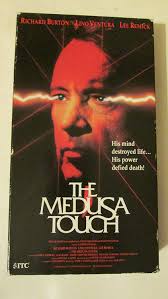 Though the plot of MEDUSA TOUCH reads like an imitation of Stephen King’s CARRIE, the source-novel by Peter Van Greenaway was published a year before King’s novel. The success of CARRIE’s film-adaptation still may have paved the way for the cinematic translation of the Greenaway work.

MEDUSA, directed by Jack Gold, has a classy look to it, not unlike other upscale horrors of the seventies, such as THE OMEN. Misanthropic Mister Morlar (Richard Burton) is nearly bludgeoned to death by an unknown assailant, so Detective Brunel, a French cop visiting in London, gets on the case. As he does, Brunel begins to cull evidence to suggest that Morlar hacked off a lot of people because he brought about calamities to those that knew him. It’s eventually revealed that Morlar possesses incredible telekinetic abilities, and that he’s been using those talents subconsciously for years, bringing about disasters, apparently out of a subconscious God-complex.


Brunel’s methodical realization of the horrific truth is well-handled, and Lino Ventura’s portrait of the world-weary cop is far more compelling than Richard Burton’s standard “booming-voice” incarnation of the malevolent misanthrope. The down side is that Morlar has no real psychology to speak of; he’s just mad as hell at the world for overly vague reasons (aside from having had a termagant mother). The “Medusa” metaphor has no real application, and actually would have worked a lot better for Stephen King’s titular telekinetic, who, unlike Morlar, has serious body-shame issues. Given the god-like proclamations of Burton’s character, maybe THE ZEUS TOUCH would have been more appropriate.
Posted by Gene Phillips at 1:03 PM
Email ThisBlogThis!Share to TwitterShare to FacebookShare to Pinterest
Labels: the marvelous