VOYAGE TO THE PREHISTORIC PLANET (1965) 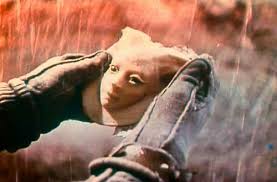 Though it’s now possible to locate unedited copies of Alexander Kazantsev’s 1962 PLANET OF STORMS, most viewers, including me, are likely to settle for watching Roger Corman’s 1965 Americanization of the Russian movie, VOYAGE TO THE PREHISTORIC PLANET. Though Corman re-used footage from the Russian movie in one other film, PREHISTORIC seems to capture the essence of the original adequately. Obviously, Corman’s director Curtis Harrington cut out references to Soviet ideology—for instance, one of the astronautswas originally an American defector—and the director also worked in new scenes of American actors Basil Rathbone and Faith Domergue for box office appeal. But the 1962 film seems less concerned with ideology than with Kazantsev’s take on the “first contact” type of SF-tale.

Indeed, Corman’s re-titling proves apt. Some online reviews compare PREHISTORIC to 1956’s THE ANGRY RED PLANET. Both movies follow a contingent of astronauts in a SF-future where humanity is just beginning to explore other planets in the solar system. In both films, the astronauts are surveiled by intelligent inhabitants that never make direct contact with the Earthmen. However, RED PLANET makes a modest attempt to suggest the alien nature of the explored planet, Mars, while PREHISTORIC is more concerned with showing the world of Venus recapitulate an otherworldly version of Earth-evolution. In this PREHISTORIC has more resemblance to some of the 1950s films using the same trope, such as the thoroughly mediocre KING DINOSAUR.

Kazantsev probably didn’t have a lot more money to work with than most of the American low-budget efforts, but his filming of the astronauts stolidly plumbing the mysteries of Venus proves fairly evocative. PREHISTORIC doesn’t follow the template of American “swampy Venus” stories; most of the terrain is craggy, barren land interrupted by occasional trees. Two of the local fauna include alien versions of a brontosaurus and a pterodactyl, and the astronauts encounter reptilian humanoids, though these appear to be savages with no intelligence. When the astronauts find evidence of intelligent life, there’s a little speculation about whether the reptile-people are responsible, but the idea isn’t seriously entertained.

The only other environmental milieu is an inland sea, wherein the astronauts—whose suits work equally well underwater as on the planet’s surface—find a submerged temple with statuary. One statue suggests that the temple’s makers worshiped a pterodactyl-god, which idea gets recycled in Corman’s other cut-and-paste job, VOYAGE TO THE PLANET OF PREHISTORIC WOMEN. The longer the astronauts stay, the more the sense that intelligent denizens are still around, though they choose not to reveal themselves. One explorer keeps hearing a feminine siren-call, and his comrades tell him he’s been reading too many comics (one of the few overt Americanisms injected in translation.) The astronauts theorize that on Venus intelligent life may have started in the ocean, only to migrate to land, which loosely recapitulates one of the less popular evolutionary theories of the 20th century.

Though there are some plodding sequences, and no real characterization to speak of, Kazantsev’s narrative maintains some suspense thanks to the presence of Robot John, an automaton who might have been Russia’s answer to Robby the Robot. John’s presence contributes to the film’s most bracing sequence. When two explorers are menaced by lava-flow from an erupting volcano—which, incidentally, seems to block the Earthmen from contact with a hypothesized alien city—the astronauts hitch a ride on the shoulders of Robot John. However, Kazantsev decided that John’s creator gave the robot his own self-preservation program—possibly in an explicit rejection of Isaac Asimov’s “laws of robotics”—and John almost dumps his passengers (one of them his creator) into the lava before the men deactivate him.

Kazantsev adapted PLANET OF STORMS from his own novel, so it may be that the rocky Venus-terrain may mirror the imagery of the book, rather than being totally the result of directorial expedience. In a few scenes Kazantsev’s Venus bears a nodding resemblance to Gustav Dore’s illustrations of the rough ramparts of Hell. But the main object seems to be, as noted, to allow the viewer to enjoy looking in on the evolutionary process, albeit in extraterrestrial guise.


Posted by Gene Phillips at 1:25 PM
Email ThisBlogThis!Share to TwitterShare to FacebookShare to Pinterest
Labels: the marvelous