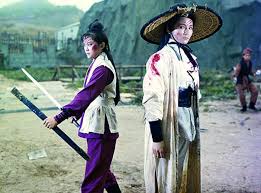 Shaw Brothers’ LADY HERMIT is a well-photographed “female diva” chopsocky, offering viewers two divas for the price of one. Cheng Pei Pei, famous for having starred in COME DRINK WITH ME, the first “diva-film” of the classic era, plays Yushuan, the “mentor figure” to younger diva Cuiping (Shi Szu), though the latter was only eight years junior to Cheng.

HERMIT also feels a bit like the kung fu version of a superhero story. Aspiring heroine Cuiping comes to town looking for the legendary Lady Hermit, famed for running around in a veiled outfit as she uses her sword-skills against evil, though the veiled heroine has been absent for three years. Cuiping doesn’t know that the Hermit suffered an enduring injury at the hands of her enemy Black Demon. Because of that injury, the heroine’s been forced to take a mundane job while healing, and in that status Yushuan meets her would-be student..

While Yushuan is under cover, Black Demon’s thugs run a protection racket, pretending to be ghosts who will murder people who don’t buy Taoist charms at a high price. Cuiping fights some of the thugs, forcing Yushuan to come out of hiding and to reassume her superheroic role. In the process, Cuiping learns Yushuan’s identity, and eventually persuades her senior to be her “sifu.” Unfortunately, during their residence in the same town, the two women fall in love with the same man, Changsun (Lo Lieh), which makes for trouble between student and teacher. However, all three fighters join together to oppose Black Demon, who, in addition to a wealth of henchmen, possesses claw-like fingers (possibly artificial) and still knows the same “special move” that injured Yushuan earlier.

This is a classy kung-fu production, lacking the overheated absurdities often associated with the genre. That said, its psychological motifs and its fight-scenes rate as no more than fair at best.

Posted by Gene Phillips at 1:24 PM
Email ThisBlogThis!Share to TwitterShare to FacebookShare to Pinterest
Labels: combative adventures, diabolical devices (u), outre outfits (u), superlative skills (u), the uncanny