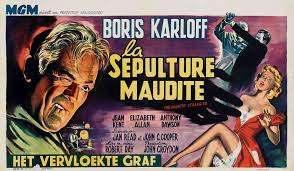 The dearth of horror-flicks in the late 1940s and early 1950s meant that Boris Karloff was largely relegated to supporting film-roles after 1946’s BEDLAM. But when horror bounced back in the middle fifties, so did Boris, and HAUNTED STRANGLER has the distinction of being one of a half-dozen films where he was once more the headliner among his thespian co-workers. It’s arguably his best performance in the 1950s as well.

However, STRANGLER’s story is never more than adequate, being a mishmash of motifs, mostly that of “serial killer on the loose” and of “amnesiac criminal helps the law track himself down.” The script suffers from a rewrite that elided the original screenplay’s notion of a 19th-century writer possessed by the spirit of a killer. STRANGLER was the fourth feature film directed by Robert Day, but cineastes will search in vain for either the well-paced adventure of his slightly later TARZANTHE MAGNIFICENT or his stylish AVENGERS episodes.

James Rankin (Karloff) has been a happily married novelist for some twenty years, given that he and his wife Barbara have a grown daughter, Cora. Cora has a romantic relationship with Rankin’s friend on the police force, Superintendent Burk, but though Rankin jokes about trying to distract Burk from his goal, the kindly old codger doesn’t really have a problem with his daughter’s choice in men. Rankin’s real difficulty arises when he becomes obsessed with proving that the notorious “Haymarket Strangler,” supposedly tried and convicted over twenty years ago, was never truly caught, and that an innocent man was hanged in his place.

Skipping over a lot of colorless set-up material, eventually Rankin gets ahold of a knife, the Strangler’s murder weapon. (Why was he called a “strangler” if he killed with a knife?) As soon as Rankin comes in contact with the knife, he transforms into the Haymarket Strangler, who has a paralyzed arm and a sunken-in cheek (Karloff removed his dental bridge to accomplish this effect). Then the reborn Strangler decides to return to his favorite passion of killing random women.

Possibly the original intention was to have Rankin be possessed by the Strangler’s spirit, which is the sort of “magic” that might explain his physical transformation. However, the script was retooled so that Rankin actually was the Strangler twenty years ago but lost his memory and was taken in by his future wife Barbara. She knew of his true nature but hoped Rankin had escaped his demons through family life; she ends up being one of the Strangler’s prime victims. The obvious problem with this rewrite, though, is that if there’s no reincarnation magic then there’s no good reason for Rankin’s appearance to alter, except that the script wants to put across a “Jekyll-Hyde” vibe. In one scene, a witness to one of the Strangler’s recent murders describes the murderer in Rankin’s presence, yet never comes close to recognizing Rankin in his “natural state.”

In contrast to assorted previous psycho-films, the script devotes no attention to the factors that made Rankin lust to kill. But then, all of the other characters are extremely bland, without even a bad comedy relief to break up the speechifying.

Nevertheless, STRANGLER is arguably Karloff’s best fifties performance, since despite his age he throws himself into the physical demands of the role—the polar opposite to his bland, self-satisfied acting in VOODOO ISLAND two years previous. That alone gives the movie a small but valuable cachet.

Posted by Gene Phillips at 11:38 AM
Email ThisBlogThis!Share to TwitterShare to FacebookShare to Pinterest
Labels: perilous psychos (u), the uncanny