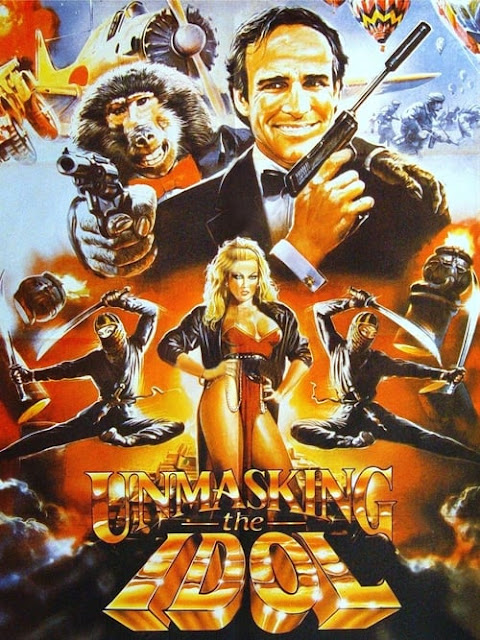 UNMASKING THE IDOL is one of two films made by the same producer, director and writers, most of whom didn't do much of anything afterward, though director Worth Keeter found a lot of work on the Americanized versions of several POWER RANGERS serials. That accidental connection seems fitting, for both of these films, while superficially aping the James Bond franchise, are just about as off-the-wall as any of the feverish fantasies from Japan's sentai series.

In both films Ian Hunter-- who also disappeared from the moviemaking profession after making the second film-- plays Duncan Jax, Interpol agent. Despite looking somewhat like Chevy Chase and sounding like Ray Walston, Jax goes around fighting huge armies of goons, blowing things up, and pulling things like an instantly inflating balloon out of his ass. But this Bond-act is mitigated by the fact that Jax covers up his tuxedo with a ninja outfit. Why does Jax dress like a ninja? The script does not say, though one must admit that James Bond is so often seen doing spectacular stunts with his bare face hanging out that he ought to be ruined as a "secret" agent. Jax seduces one babe early in the film and makes the usual witless double entendres, but his true love seems to be his pet baboon "Boon," whose presence brings a new level of lunacy to an already goofy movie.

Interpol assigns Jax and a small group of tough guys to infiltrate a remote island and take out Goldfinger and Doctor No-- er, Goldtooth and the Scarlet Leader. The former is hoarding gold for some big world-conquering coup, and the Scarlet Leader, who always goes around in a red ninja-suit, is going to use an ancient idol to unleash an occult power. The idol doesn't wear a mask, so I don't know why the title talks about "unmasking" it, though there is a minor revelation when the Scarlet Leader is unmasked. Maybe the writer got the two confused? Or maybe he just thought two buzz-words together might make the concoction sound tastier to trash-film devotees.

To be sure, there's some money behind this wack-a-doodle project, so that stunts and sets are at least competent compared to the real bottom of the barrel stuff. But when one of my main characters is a baboon who goes around wearing a little karate-outfit when he gets in a fight, any attention to verisimilitude has pretty much gone out the window. 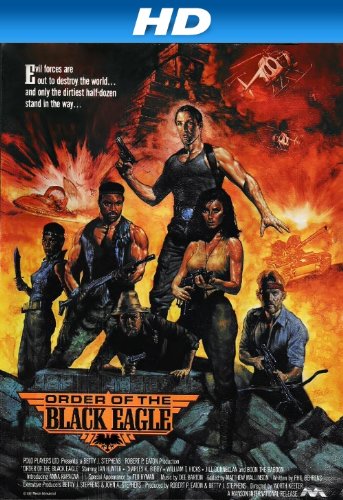 After IDOL's "everything and the kitchen sink" approach, Jax's one and only sequel couldn't help but seem fairly restrained, more on the level of your average "Nu-Image" action-flick. Jax is more Rambo than Bond or even Ninja-Bond this time, as he and a whole new crew of mercenaries plunge into the wilds of South America to battle a Neo-Nazi cult, who are also holding prisoner an Interpol lady agent with the winsome name of Tiffany Youngblood. There aren't as many wacky lines as in IDOL, though we do get a tough girl mercenary (Anna Maria Rapagna) state that she hasn't had so much fun since Nicaragua.

One can't fault the villains here, though, for they're just as fanciful and derivative. Baron Tepes, a fat guy with an eyepatch, leads the Neo-Nazis as they plan to dominate the world with a proton-ray satellite. But Tepes himself won't be the leader of the New Order, because he's got Hitler himself on ice and ready to be revived.

Again, a lot of stuntmen go flying from planted charges as the heroes go around blowing things up. Boon the Baboon doesn't appear as much, though he does get a scene in which he pilots a small tank (with a shark-face) against the Nazis. Jax himself has a few distinctive moments, like when he uses a metal wire to saw his way out of a prison, and later uses the same wire to set a trap that cuts off a Nazi motorcyclist's head. But just in case anyone in the audience gets too comfortable with the prowess of the good guys, there's a scene in which the lot of them try to push a big truck down the road to get its engine started, and end up pushing the vehicle off a cliff. (Hey, now we know where the MCU got its model for incompetent heroes!)

Both films have enough goofy action and dumb lines to furnish "so bad it's good" entertainment, and in comparison to the many deadly-dull excuses for adventure-flicks, that's nothing to sneeze at.