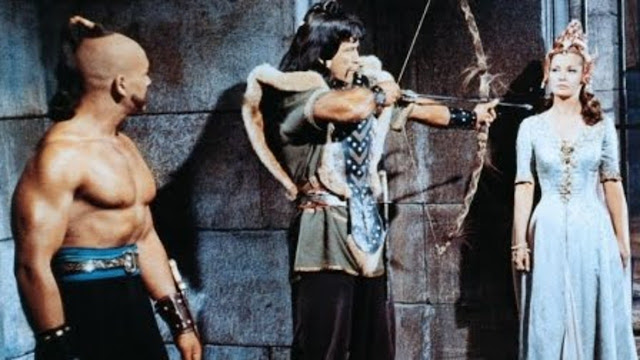 These two Maciste films, in which the hero is re-christened "Hercules" for non-Italian markets, were shot close together by the same director and many of the same players. However, though both involve the adventures of Maciste (Mark Forest) fighting Mongols in the 11th or 12th century, there seems no real connection between them, and leading lady Jose Greci wins the affections of Maciste under two separate names. Of course, since Maciste could theoretically pop up at any time and in any place, he may have ended up with a lady fair in two separate eras.

The first film, MONGOLS, is tied to a historical era in that it begins with the death of Genghis Khan in the 11th century. Though Genghis has left behind the commandment to make peace with the West, his three sons plan a campaign of war using the oldest trick in the book: make it look like your enemies attacked you. "The West" that the Khan's sons lust to conquer is a sort of generic Eastern European land, with one city named "Tuleda." Under the command of the war-hungry sons of Genghis, Mongolian forces overrun the city and take prisoner its princess Bianca (Greci), although a young prince escapes. Eventually Maciste finds out about the invasion and he goes to Mongol-town to rescue the princess.

Though Forest does a creditable job playing the doughty hero, the rest of the characters are lame. The three Mongol brothers take turns trying to kill Maciste and failing, the young prince doesn't do much, and there's an Asian beauty, Lijuan (Maria Grazia Spina), who proffers scheming advice to the brothers. None of them really comes alive in the best melodramatic tradition; they all just play rather routine parts from start to finish. The closest one gets to some good drama is that after Maciste wins a tournament, he's offered a choice between his own freedom and that of Bianca. He sacrifices his own liberty for hers, but then a traitor poisons Bianca's mind against the hero and she scorns him. Then the Mongols break their promise and capture Bianca again, after which Maciste breaks free and engages in some lively but unexceptional violence. 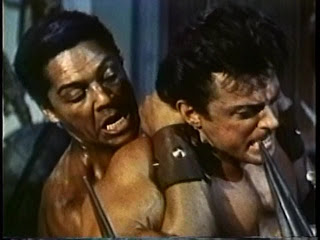 According to the opening of BARBARIANS, it takes place in the 12th century, so maybe it's a whole new era after all, though it's the same old Mongol menace. Genghis Khan is back to being alive, thus causing one online review to view this as a "prequel," but this time his forces attack a real target, 12th century Krakow in Poland. (Depending on which Mongol attack was being referenced, the prologue may just have got the century wrong.)

Anyway, this time Maciste has already gone head to head with the invaders, and they've suffered greatly from encounters with his fantastic (albeit just uncanny) strength. Military leader Kubulai tries to put a good face on his failure, and gets just one more chance to redeem himself. Meanwhile in Krakow, a young half-Mongolian woman, Arias (Gloria Milland) takes refuge from the Mongols in the home of a poor fellow and his daughter Armida (Greci). While in their company Arias learns a secret: that Armida is actually the last heir to an almost extinguished royal line, sent to live in poverty to conceal her from enemies. The Mongols learn of Armida's identity from a separate source and kidnap Armida, killing her father. Arias is later attacked by hostile villagers, but Maciste saves her, at which point she falls hard for the big lug.

Maciste then journeys to the camp of the Mongols, where he volunteers to undergo any ordeal to liberate Armida. After the hero beats the Mongols' mightiest fighter-- who, curiously, is a big Black guy-- Genghis allows Maciste to live but pursues his plan to have Armida marry one of his sons.

Maciste leaves, rallies some troops, but ends up back in Mongol clutches, semi-betrayed by Arias, who tries to capture him for her own delectation. But Kubulai plans to kill Maciste despite their deal. Instead he kills Arias and Maciste breaks free. Maciste escapes and mounts an attack on the Mongols by the Polish army, ending the picture in a big end-battle. There's no final duel between hero and villain, possibly because Maciste had already defeated all three Mongol brothers in the big tournament scene.

Though formulaic, BARBARIANS offers its players much better dramatic moments, particularly Greci, whose character has to struggle with learning about her hidden destiny. Forest's Maciste again seems to settle down with the heroine, in marked contrast to all those flicks in which the restless hero just keeps on wandering.

Posted by Gene Phillips at 1:20 PM
Email ThisBlogThis!Share to TwitterShare to FacebookShare to Pinterest
Labels: combative adventures, superlative skills (u), the uncanny