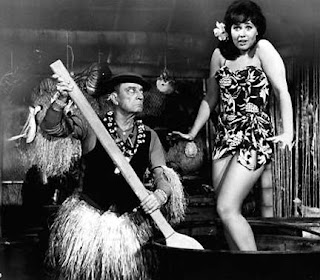 
The five "canonical" (so to speak) Beach Party films-- those that headlined those overaged high-schoolers Frankie Avalon and Annette Funicello-- were all directed within about three years by William (BEWITCHED) Asher.  Since it appears that he was just trying to knock them out as quickly as possible before the "beach film" fad did the big fade, it's not exactly surprising that he didn't choose the sophisticated comedy of Noel Coward as his model.  It's also not surprising that what Asher's beach films most resemble content-wise is the more hyperkinetic comedies of the silent era; lots of visual gags centered around a very loose plot.  To be sure, none of Asher's beach films-- and possibly no beach film ever, by anyone-- ever comes up to the best of silent comedies a la Chaplin and Keaton.  Still, they're probably no worse than your average Keystone Kops flick.  Possibly the casting of Buster Keaton in the fifth and last film, HOW TO STUFF A WILD BIKINI, was a tip of the hat by Asher or one of his people to their comic model.

Of the two, BIKINI BEACH has a little more of that thing called "plot."  Since the first film centered on surfing and the second revolved around "muscle beach" activities, the third in the series moves toward a less beach-oriented sport: drag-racing.  A popular English singer, "the Potato Bug" (read: lame Beatles spoof), comes to the local beach to participate in a big drag-race.  When the Bug makes a play for DeeDee (Funicello), Frankie (Avalon) drops his surfboard and enters the race alongside his rival.

On another front, rich elder statesman Harvey Honeywagon (Keenan Wynn) also arrives on the scene, determined to prove that members of the "bikini generation" all act like animals.  To prove this he takes a man-sized chimpanzee (Janos Prohaska)-- who goes by the name "Clyde" and so may be the spiritual ancestor to the orangutan from EVERY WHICH WAY BUT LOOSE-- and trains the chimp to do all the things surfers can do (well, at least with a surfboard; Clyde never gets to make whoopee with any of the beach-babes).  Honeywagon seems a bit of a rewrite of the snotty professor from 1963's BEACH PARTY, who came to study the beach-teens as if they were animals, but Honeywell has an ulterior motive for his contempt.  He wants to arouse public ire at the loose morals of the beach youth so that the beach will be closed and he can buy up the land to expand his neighboring "old folks' home."  This may be the closest Asher ever gets to potraying his own generation as inherently jealous of the vivacity and sex appeal of the younger generation, but the script lets Honeywagon off the hook.  The teens' teacher (Martha Hyer) shows up to protest Honeywell's mischaracterization of the flaming youths (who are, the film keeps telling us, fundamentally and boringly moral) and ends up converting the journalist to her side.

A lot of silly, causality-violating things take place, particularly during the de rigeur fight between the surfers and Erich Von Zipper's biker-goons.  A surfer slugs a biker so hard he hits the ceiling, and dancer "Candy" knocks people around with the shimmying vibrations of her butt-- but none of them are meant to violate the fundamentally naturalistic feel of the flick.  So all these bits of nonsense, as well as the chimp-who-can-ride-a-surfboard, fall into the naturalistic versions of their appropriate categories.

Boris Karloff makes a quick cameo here, filling in for the late Peter Lorre, who had appeared in the second beach film.  His dialogue references to Vincent Price, who perhaps never lived down his appearance in the first Asher beachfilm, and even makes a coy allusion to Price's real-life hobby of art-collection.

1965's STUFF plunges more than any previous beachfilm into the wackiest possible aspects of a marvelous comedy, and it's not a good transition.  The story's a mess, beginning with "naval reservist" Frankie stationed out in the Pacific Islands and getting cosy with a native girl (Irene Tsu, seen above with Keaton).  One presumes that he's only having G-rated sex with the sarong-wearing seducer, but even so he gets quite jealous when she suggests that DeeDee may be back on the beach having some applesauce for the gander. Frankie appeals to the local witchdoctor Bwana (Keaton) for help.  Bwana uses heap big magic to materalize hot babe Cassandra (Beverly Adams) on the beach, who in theory can mesmerize every beach-boy to keep them from moving in on DeeDee.  However, the spell doesn't work on one guy, Ricky (Dwayne Hickman), who continues to pursue DeeDee for the rest of the picture.

And just to keep the sports-theme going, Von Zipper ends up teaming up with Cassandra to win a motocycle race, but naturally Ricky and DeeDee win it.  However, gender inequities are forgotten and true love is validated in the end, when Frankie (who has remained stayed on that island for most of the picture) magically pops back to the beach to reaffirm his bond with DeeDee, for which the next steps are presumably marriage and the baby carriage.

Though the plot is all over the place, the songs are a little wittier than the usual romantic fluff, while the opening titles, executed in claymation by Art (GUMBY) Clokey, may be the funniest thing in the film.  Instead of a cameo by a horror-actor, for this last beach-blanket blitz Asher has his wife Elizabeth Montgomery appear for a second as a Samantha-esque witch-- a nice bit of pop-cultural dovetailing, since to this day BEWITCHED and the beach-films remain the two works for which Asher is best remembered.