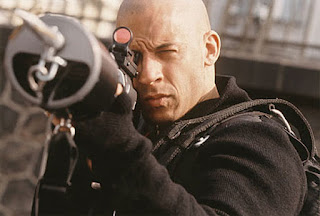 Most films in the “superspy” subgenre lie beneath the colossal shadow of the James Bond books and films.  This means that like those sources, latecomers have the same ambivalence as to their phenomenal qualities.  Sometimes they seem to take place entirely within a naturalistic world, and sometimes in one that includes just a few uncanny aspects.  And sometimes the superspy’s world possesses outright marvelous aspects, though these are usually confined to specific super-weapons, like Bond’s invisible car in DIE ANOTHER DIE.

To be sure, these are both big, loud action-films wherein the details of the plots only lead the hero from one violent encounter to another, so neither film pursues any ideology very deeply.  Of the two, the second is perhaps a little more complex than the first, simply because it must attempt to frame a Black American protagonist within the demands of the superspy subgenre.

The first XXX film stars the Caucasian actor Diesel as Xander Cage, a civilian “extreme sports” devotee constantly at odds with the law.  The NSA drafts him to serve as an undercover agent in a “Russian Mafia”-type operation involving—what else?—extreme sports.  As is often the case when rebels are called upon to serve their countries, the hero has more in common with the villain than with his superiors.  Xander Cage clearly identifies with the gang-leader’s desire to run roughshod over societal mores, and is more than a little taken with the Resident Babe in the gang (Asia Argento).  In due time, though, Cage finds out that the villain has an apocalyptic scheme to unleash a super-virus that will abolish the oppressions of government, and of course, this is a little too “extreme” for the hero.  There’s a great deal of screaming metal and wild stunts, though surprisingly no major mano-a-mano fights.  Diesel’s character is paper-thin but he manages to project a fair attitude of laid-back cool.  The conclusion includes Diesel trying to counter the villain’s machinations with the use of a very Bondian super-car, chock full of flamethrowers and ejection seats, and finding that the car is absolutely useless for his needs.

The second XXX film casts aside the “extreme sports” theme of the first film and forms its defiant ethic out of the Black American hip-hop culture, well symbolized by the fact that the film’s first image of the hero shows him in prison clothes and in handcuffs.  The character of Stone manages to combine elements of rebellion and patriotism in that in civilian life he was an experienced car thief, yet he joined the US Navy and got put in prison for defying an irresponsible superior officer.  And though the NSA breaks Stone out of jail to thwart yet another major plot against the government, the secret organization is much reduced in potency as many of their agents have been assassinated.  Indeed, an offhand comment mentions that Xander Cage is one of them, though strangely enough, one of the villain’s henchmen bears an uncanny resemblance to Vin Diesel.  The plot this time involves not a threat from without but from within: a Machiavellian military officer is attempting to take over the government.  Stone agrees to fight against this plot not because he esteems the corrupt (read: white) government, but because, as he explicitly tells one of his homies, it will be worse for his people—that is, not blacks in general but his fellow car-jackers-- if the bad guy takes over.

One can’t take too seriously the ethics of a film that endorses criminality as long as it’s against “the Man,” but the second XXX is at least more interesting to read than the first because of all the racially-oriented sociological tropes.  Stone scoffs at Bond-style gadgets, but his film borrows one significant trope from both Bond films: giving the hero both a Good Girl and a Bad Girl.  In common with black action-films of the 1970s, the Good Girl is of course a “sister,” while the Bad One is not only white but blonde.  To be sure, in the 1970s films the black hero would enjoy both women, but the ideological ground has shifted, so that Stone never bags the blonde, though Samuel Jackson’s Gibbons does get the privilege of blowing away the Bad White Girl.  And though Stone takes great pleasure intimidating the white gadget-maker from the first film, the film does give him one standup white guy as an ally who isn’t subjected to the usual humiliation.  The film’s biggest liability is the star: where Vin Diesel was lightweight but charming, Ice Cube can’t project anything but a supercilious surliness, and his lack of presence is painfully clear in the scenes with Jackson, who out-acts the Cube even when Jackson’s merely standing around in silence.


Posted by Gene Phillips at 11:58 AM
Email ThisBlogThis!Share to TwitterShare to FacebookShare to Pinterest
Labels: combative adventures, the marvelous