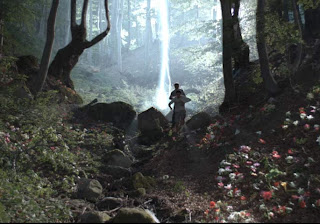 BLACK FOREST has very nearly the same sort of pedestrian failings as an earlier Syfy-allied venture into mythical worlds: ODYSSEUS VOYAGE TO THE UNDERWORLD.

The only good thing about FOREST in comparison to ODYSSEUS-- or, to stay more within the bailiwick of FOREST's subject matter, ABC's ONCE UPON A TIME teleseries-- is that at least FOREST pretty much sticks with the established lore of that topic.  Whereas ODYSSEUS tossed in oddball Christian-seeming myths into a pagan Greek cosmos, and TIME regularly conflates real fairy tales and modern versions of same like PINOCCHIO and WONDERLAND, at least FOREST references only genuine fairy tales: Snow White and her dwarves, trolls living under bridges, etc.

Still, with the exception of one scene, FOREST does nothing interesting with its medley of folktale-retellings.  As with too many SYFY films to count, the action centers upon a motley crew of strangers forced into one another's company during some outre situation.  In this case the thoroughly uninteresting victims get lost in a fairytale version of Germany's Black Forest.  A doctor named Anderson becomes the de facto leader of the group, as well as the focal character in that he's given a Haunted Past, in that he's a widower. This becomes slightly important when the group-- searching for a couple's baby stolen by faerie creatures-- is befriended by Karin, a mysterious young woman who resembles Doc Anderson's dead wife.  Eventually it comes out that Karin is a mortal woman who, like the vanished infant, was stolen by the faeries as a child.  She looks like the doc's dead wife because she projects an appealing "glamor" upon herself, resulting in the accidental resemblance. Because Karin was never rescued, she became in essence one of the fae, which is the evil "fae-te" that the protagonists must prevent for the lost child.

Child-stealing is such a visceral plot-device that it's hard to get it wrong, but the direction and scripting of FOREST is tedious and predictable. It's interesting that this was the first narrative film completed by the scriptwriter, whose other credits are all on documentaries.  Perhaps that fits, since the plot-threads unroll with a sort of documentarian plodding.

Only one scene brightens the boring moments of routine anguish and pallid fight-scenes.  This scene occurs when the infant's mother runs alone through the forest and encounters an evil witch (who's actually a stand-in for the main villain, played by the film's only name-actor, Ben Cross).  The witch shows her a tree from whose branches hang an assortment of baby-cribs, from one of which the infant can be heard crying, and then challenges the mother to find her child.  This scene is the only one in the film that captures some of the perverse quality of genuine folktales.  For that alone FOREST stands a little bit taller than most Syfy Channel ventures into mythic domains.

But only a very little bit.
Posted by Gene Phillips at 3:36 PM
Email ThisBlogThis!Share to TwitterShare to FacebookShare to Pinterest
Labels: the marvelous