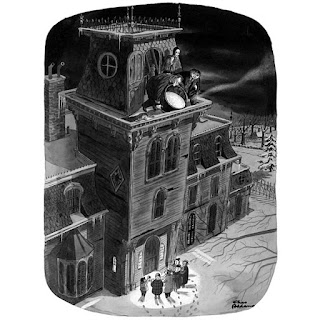 One reason that I chose to head my review with a famous one-panel cartoon by Charles Addams was because the first Paramount ADDAMS film uses it for the opening sequence, translating the cartoon in pitch-perfect live-action terms.  Both the cartoon and its treatment by director Barry Sonnenfeld speak volumes as to how this film and its sequel succeed in finding so much fun in unadulterated sadism.

Sonnefeld's technique is indeed capsulized by the cartoon: because Addams doesn't show the carolers actually deluged in boiling oil for their unwelcome sentiments, the threat remains distant and the scene remains funny.  Some of this light-hearted attitude toward pain and death was translated into the 1960s ADDAMS FAMILY teleseries, but on the whole the series concentrated on showing the freaky Addamses as carnival-mirror images of the American nuclear family.  It was sometimes intimated that some if not all Addamses relished a few turns on the torture-rack, but often their behavior was fairly "normal" compared to that of the cartoon characters.  Possibly the most visibly "sadistic" character was one created for the series: Morticia's sister Ophelia, who had the habit of judo-flipping any male who allowed her to lay hands on him.  To be sure, Ophelia was something of an "innocent sadist" in that she never seemed to notice the havoc she'd wrought.

Sonnenfeld's films, fortunately, were allowed to paint with a broader brush.  FAMILY starts out by introducing a "family tragedy" hanging over the heads of the macabre but contented Addamses: Gomez's brother Fester has long been missing, the result of a quarrel over a woman prior to Gomez's marriage to Morticia.  This plotline slightly resembles the plot of the 1977 TV-movie HALLOWEEN WITH THE ADDAMS FAMILY-- where Gomez's brother was once a rival for Morticia-- though the substitution of Fester for this brother essentially re-arranges the Addams Family tree, inasmuch as Fester was originally Morticia's uncle.  In any case, the Dickensian "lost relation" trope serves FAMILY quite well, as a gang of crooks assemble to deceive the Family with a ringer-- all unaware that their ringer is the real Fester, suffering from a loss of memory.

Keeping in tune with the opening boiling-oil scene, most of the Addamses are flagrantly, almost carelessly violent in their actions or at least references to past actions.  Morticia (Angelica Huston) is one of the few never seen to lift a violent hand to anyone, though she croons a memorable tagline: "Don't torture yourself Gomez.  That's my job."  Gomez (Raul Julia) and Fester (Christopher Lloyd) greet each other by trying to judo-flip one another, while Wednesday (Christina Ricci) and Pugsley (Jimmy Workman), shown as essentially amicable in the teleseries, become virtual incarnations of sibling rivalry, laying deadly traps and devices to kill each other. How they avoid being actually killed remains a mystery in Sonnenfeld's world, as there are no indications that any of the Addamses are literally supernatural, aside from side-characters like Cousin Itt and Thing.  Most of these miraculous survivals I tend to view in the DDAFF category, in that the audience isn't supposed to take the apparent violations of causality any more seriously than the antics of a Roadrunner-Coyote short.

The Dickensian theme gets further exploitation when the villains manage to turn the Addamses out of their sumptuously sinister house while attempting to ferret out the Addams treasure.  This section is a little weak-- the Addams are never at their best outside of their own macabre cosmos-- but the climax, with virile Gomez coming to Morticia's rescue, is still good fun.

ADDAMS FAMILY VALUES actually improves on the first film in giving the Addamses a more worthy opponent: Debbie Jellinsky (Joan Cusack), a black-widow murderess who sets her sights on marrying the eternally clueless Fester in order to kill him and reap the Addams fortune.  Ironically, this threat to the family's unity is able to enter their domain thanks to the fractiousness of Wednesday and Pugsley toward the new Addams child Pubert; their constant attempts to kill Pubert (all played for broad "this won't really happen" laughs) make it necessary for their slightly more practical parents to bring in a nanny.  Wednesday is the only Addams smart enough to see through Jellinsky's facade, but Jellinsky neutralizes her and her brother by sending them off to a relentlessly cheerful day-camp.  However, after assorted adventures in which the macabre duo torment or are tormented by their day-campers, once more the Addams cavalry arrives in time to save Fester from a death worse than fate.

Leifmotifs of sadistic psychology play throughout both films, though only VALUES extends the Addams mindset into a critique of societal norms.  The kids' encounter with the day-camp ends by making the forced fun of the camp seem far more grotesque than the Addams' brand of ghoulishness. Nothing conveys this better than the scene in which the eternally solemn Wednesday forces herself to give the campers a big toothy smile, so alien to her being that even the happy-campers are repelled.  By comparison her attempts to eletrocute her brother seem more "normal," in that they are at least honest expressions of hostility.

The cast, as so many others have remarked, is superb, with standout performances from Julia, Huston, Lloyd, and Ricci.  Some characters, such as Lurch and Grandmama, aren't given very much to do, but this seems to be the inevitable downside to adapting a serial work into a feature-film format.

As noted above the presence of nonhuman creatures like Thing and Itt, as well as a few other gimmicks, do propel the film into a marvelous phenomenality, though arguably the Addams Family may have taken some inspiration from a "weird family" in the uncanny mode: the brood from 1932's OLD DARK HOUSE, which I hope to get reviewed here some fine day.

Posted by Gene Phillips at 10:38 AM
Email ThisBlogThis!Share to TwitterShare to FacebookShare to Pinterest
Labels: the marvelous