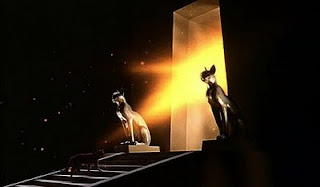 In my review of the Disney cartoon-film HOME ON THE RANGE I wrote:

"HOME ON THE RANGE is the first film I've reviewed here which is "marvelous" in one restricted manner: its heroes are animals who resemble their real-world counterparts in every way except that they can think just like human beings, and can carry on fluent conversations in humanspeak with other animals though never with humans."

Disney's THREE LIVES OF THOMASINA, however, is even more restricted: its only manifestation of a marvelous nature is that only the film's titular animal, housecat Thomasina, is presented as being able to frame its thoughts in human terms, though she never speaks to any other creatures and none of them seem to possess such sentience.  Thomasina's capacity for human cognition proves most noteworthy when the feline, having supposedly lost one of her nine lives, travels to a "cat heaven" ruled by the Egyptian goddess Bast, and receives dispensation to go back and live on Earth again.

However, there's no real support in the plot for the idea that the cat has come back to life, even in the jokey sense of the "nine lives" folklore.  More on that later.

Like many of the children's tales adapted by the Walt Disney Company, the film (co-scripted by Paul Gallico, who wrote the source book), has a fair degree of psychological realism.  It begins in a small Scottish town, where veterinarian Andrew McDhui (Patrick McGoohan) lives with his little daughter Mary, their housekeeper, and Mary's beloved cat Thomasina.  Though McDhui loves his daughter, his loss of his wife five years previous has hardened his heart toward the animals for which he's supposed to care.  Among the town gossips McDhui acquires the reputation of an animal-hater who's quick to put beloved pets to sleep if he can't help them.

McDhui's ruthlessness-- rooted more in severe practicality than in cruelty-- comes to a head when Thomasina is injured.  His daughter brings the cat to her father, pleading for him to save the animal.  But McDhui is preoccupied with another case, and he makes the snap decision that the animal's wound has become infected with tetanus, making the creature a danger to other animals.  McDhui orders a subordinate to put Thomasina to sleep, not realizing the depth of his little girl's attachment to that particular cat.  McDhui assumes that one cat is as good as another, but he finds out differently when Mary refuses to interact with her father, declaring him dead to her.

There isn't a lot of overt psycho-speak here, though the town priest does suggest that McDhui may have subconsciously been jealous of Mary's affection for the cat.  Arguably Thomasina has become something of a subtitute for the mother Mary has lost, while McDhui has reacted to his wife's loss by closing off all emotions, which may be the real reason Mary declares him dead.

Thomasina does, to be sure, appear to be dead for several hours at least, and even remains inert when Mary and her kid-friends bury him. Still, it's possible the subordinate simply didn't give the feline enough ether. A young woman named Lori (for Lorelei?) discovers that Thomasina is still alive, so Lori nurses the cat back to health at her secluded cottage.  The townspeople entertain the notion that Lori's a witch, but she only possesses a high degree of empathy for animals, taking all manner of wild creatures into her home for care.  This empathy is naturally the ability McDhui has lost, so when the plot manages to throw the two of them together, she awakens him to greater caring for the world.  Thomasina, however, does not remember either McDhui or Mary as the cat has lost its memory, and spends several days with Lori, which comprises the feline's "second life."

However, Thomasina has a spurt of memory that causes her to seek out her old home.  Mary sees her and chases her in the rain, not catching the cat but nearly catching pneumonia.  While McDhui suffers at his daughter's affliction, he's given a chance to redeem himself by the appearance of a set of villains: a gypsy circus playing near the town.  Mary's kid-friends witness the circus-peformers abusing their animals, and call upon McDhui for help.  McDhui, confronted with the end-result of his own emotional sterility, gets into a brawl with the circus-people (for a studio that so embodied the notion of the "G-rating," Disney could always be counted on for good fight-scenes).  Following a fire that destroys the circus and symbolically purges its cruetly, Thomasina (still back at Lori's cottage) suddenly remembers everything and returns home for its "third life" in a classic tearjerker conclusion.  The film ends with McDhui marrying Lori and Mary reunited with Thomasina, so that even though the majority of the film has been dramatic in structure, the ending at least smacks of the structure of comedy, where a good wedding is just what's needed to banish the forces of evil.
Posted by Gene Phillips at 3:34 PM
Email ThisBlogThis!Share to TwitterShare to FacebookShare to Pinterest
Labels: the marvelous