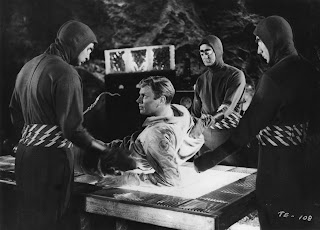 Though the only thing KILLERS is likely to kill is one's interest in 1950s SF-films, the film (directed by W. Lee Wilder, brother of the better-known Billy Wilder) does boast what many bad films do not: a paranoiac scenario that, with better writing and direction, could have been quite gripping.
KILLERS is certainly among the first commercial films to deal with the 1950s "flying saucer" craze, and may be the first to focus on a hero whom a later era would dub an "alien abductee."  Nuclear physicist Doctor Martin (Peter Graves) begins the film in a jet plane, flying above the site of an atom bomb test in Nevada.  The bomb goes off successfully, but the plane disappears.  Later it's found crashed, but there's no trace of Martin's body in the wreckage.
A day or so later, Martin turns up, shambling toward the army base in charge of the test.  He has a strange surgical wound on his chest but no memory of anything that happened to him.  After an astonishingly short debriefing, Martin's allowed to go back to work.  He promptly steals files from the base and drives off to a remote cavernous location outside town.  A policeman overtakes him, but Martin beats him down and drives away once more, with police and army in hot pursuit.  Martin cracks up his car, and while he's recovering in custody, the army doctor gives him truth serum.
Martin spins a wild tale about having been captured by aliens living within the caverns, who have been tapping the nuclear energies of mankind's atomic experiments.  The aliens' long-range goal is to use the energy to breed huge monsters which they plan to unleash upon mankind, so that the aliens can then inherit the planet.  But for the time being they need an inside man to garner info on future nuclear tests, so they cull Martin from the wreckage, bring him back to life with their superior technology, and hypnotize him to use as their agent.  Martin, no longer brainwashed, wants the army to atom-bomb the aliens' hideout, but no one in authority believes Martin.  Fortunately Martin remembers enough about the aliens' technological setup that he realizes that he can destroy them by seeking out the local power station and temporarily shutting off the power.  He escapes his captors, forces his way into the station, and successfully destroys the invaders in an atom-bomb-like holocaust.
As I said, this bare summation suggests a strong degree of paranoia.  In an issue of the film-magazine DELIRIOUS, Steven R. Johnson pointed out that Martin spends almost the whole film being interrogated by someone for something, or having technicians mess with his head in some manner.  Martin does have a wife, but she's a negligible character.  Her only good moment takes place shortly after Martin's return from the dead, when an investigator hilariously asks the wife if she thinks her husband has been having an affair.

Unfortunately, neither the scriptwriter nor the director exploits the possible paranoiac qualities of Martin's dilemna.  They seem to have been concerned with simply getting the film done as cheaply and expediently as possible, which in part explains KILLERS' heavy usage of stock footage, particularly for the Attack of the Rear-Projected Monsters (giant lizards, roaches, etc.)  The producers neglect even the most basic requirements for verisimilitude, particularly with respect to the aliens' plot to use Martin as their spy.  Perhaps one can blink at the notion that they expect him to be swiftly returned to his duties after a mysterious disappearance and memory-loss.  But on top of that, Martin has this conspicuous surgical wound resembling an inverted cross-- dimly suggesting the Satanic, though no other strong Christian motifs occur in the film.  At the very least Martin's army superiors should have suspected that he'd been operated on by enemy spies.  Yet, despite the film's tacit endorsement of American nuclear brinkmanship, nothing in the film directly references America's worldly enemies, though of course the aliens may stand in for the Communist menace to some extent.

The closest the film comes to such a reference is the opening, when some footage of a radar station is accompanied by a reference to radar as "eyes that never sleep." This is one of KILLERS' few strong poetic motifs, for in addition to Martin's constant interrogation, much of the film concerns the horror of being beneath the constant scrutiny of others.  Wilder throws in numerous shots of people's faces looking directly into the camera, and hence filling the screen with their concerned scrutiny.  Others ocular occurences include an early shot of a doctor looking down at Martin with an eye-like reflector, a scene in Martin's car where he beholds an illusion of "floating eyes," and the viewscreen through which one of the aliens hypnotizes Martin during the long flashback.

And then of course there are the aliens themselves, who are essentially humanoid except for their huge bug-eyes.  The alien leader explains their oversized eyeballs in terms of their reason for seeking to usurp Earth: the aliens' own sun had "dimmed" so much that their eyeballs have evolved to compensate for the lessened light.  The leader mentions that his people have also conquered other planets in their own system, but they need a new system, and Earth is the only habitable planet.  Despite their advanced technology-- most of which comes down to pseudo-scientific gobbledygook-- there's a certain irony that their method of creating apocalyptic monsters depends on tapping the "electron volts" from humanity's atomic technology.  This is the closest the film gets to critiquing the consequences of nuclear power, implying, as many other 1950s films will, that the growth of technology begets monsters.

What's most puzzling about KILLERS is its prescience.  Given that Martin encounters a virtual menagerie of giant critters down in the aliens' caverns, one might think the film occured long after 1950s screens had been filled with all manner of giant beasts.  But KILLERS, debuting in the US in January 1954, precedes two of the best-known "atomic mutation" films of the same year: THEM! and GOJIRA.  Only THE BEAST FROM 20,000 FATHOMS, coming out in 1953, provides a clear cinematic precursor, though it's possible that the scriptwriter took some inspiration from prose science fiction for his motley monster-crew.

Finally, I must admit that better scripting and direction wouldn't have been enough to save the film.  The actors are uniformly dull, and I suspect that they aren't entirely the victims of their lines.  Peter Graves as Martin is the best of an uninspired lot, but even when he's doing supposedly exciting things-- running from cops, taking a power-plant worker hostage-- he shows little conviction.  He never possesses the gravitas of a nuclear physicist; presumably the script merely designated him as such so that there would be a small degree of believability to the way he speedily deduces the aliens' weak spot.

KILLERS, in conclusion, is a film more fun to think about than to watch.

Posted by Gene Phillips at 10:26 AM
Email ThisBlogThis!Share to TwitterShare to FacebookShare to Pinterest
Labels: the marvelous