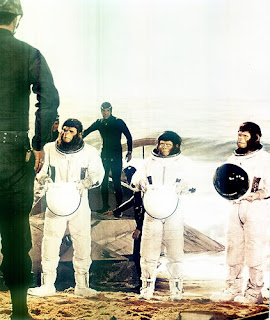 
It must have been a real head-scratcher for writer Paul Dehn to figure out how to revive the "Apes" franchise following the apocalytpic finish of BENEATH THE PLANET OF THE APES the previous year.  Dehn, who did not collaborate on the original PLANET OF THE APES, was one of two writers who riffed on the original to create BENEATH, which as noted before was something less than a stellar follow-up.

For ESCAPE, the third film in the series, Dehn, director Don Taylor and producer Arthur P. Jacobs (alleged to have been a very hands-on producer) came up with a story-within-a-story.  The base story of PLANET was that after human beings destroyed their culture through nuclear war and regressed to subhuman conditions, the apes independently evolved into thinking creatures and essentially repeated all the mistakes that man had made (despite characters like Doctor Zaius, who stumped for Ape Superiority).

Now, the time-travel that made possible the dislocation of the original film's astronauts takes place once more for two of the intelligent chimp-characters from the first film, Cornelius(Roddy McDowell) and Zira (Kim Hunter).  Somehow these two chimps, plus new chimp-character Milo, manage to pilot the astronauts' ship away from their destroyed world, back through time to reach the Earth of the early 1970s.

Dehn's script plays the "fish out of water" theme for all it's worth, but despite moments of lighthearted comedy, the film keeps a better sense of the fundamental darkness of the premise than the previous series-entry.  For one thing, Milo suffers a "redshirt" fate, being killed (with all due irony) by one of his savage ape-ancestors.  And even after modern-day humans have come to accept the presence of the time-travelling intelligent apes, one of the president's advisors ferrets out the story-within-a-story : that in years to come a plague will conveniently decimate all of mankind's household pets, which then moves wealthier humans to adopt apes as their new pets-- and by extension, a new slave society.  This society, rather than evolution, will make possible "the rise of the planet of the apes."

Further, a leader is supposed to arise and lead the slave apes out of oppression, and the humans begin to suspect that, in the grand tradition of time-paradoxes, this leader will be the child of Cornelius and Zira.  The apes escape the retaliation of human beings for a time, but eventually meet a tragic fate, though their child survives to bring about the fate feared by the humans-- as well as a sequel.

Though ESCAPE is not as sharp a satire as PLANET, it's certainly much better than BENEATH, and it benefits from continuing the two chimps as the most interesting characters of the series.  Taylor's direction is much more engaging than that of previous helmer Ted Post, though to be sure the film is largely a set-up for the fourth film.

CONQUEST, directed by J. Lee Thompson, assumes far more downbeat, nihilistic tones, as it simultaneously justified the vengeful rise of the apes and condemns their revolutionary fervor.  By the time of CONQUEST, Caesar (Roddy McDowll), the child of Cornelius and Zira, has grown to adulthood, protected by a human mentor, circus-owner Armando (Ricardo Montalban).  By this time, despite the government's supposed foreknowledge of how ape-slaves would affect humanity's destiny, history has still transpired just as Cornelius predicted.  Everywhere Caesar looks, he sees apes maltreated by human beings, who seem to consist largely of either self-indulgent sybarites or fascist thugs. The police do remain on the lookout for the predicted arrival of the apes' prophecized savior, and they kill Armando in the attempt to find Caesar.  The bulk of the film follows Caesar's attempt to find a way to "fight the power," free his people, and bond with a female ape of his choosing (Natalie Trundy).

Precisely because the history is so locked-in at this point, characterization suffers.  The humans are either power-hungry Simon Legrees or weakly protesting humanists, while aside from Caesar and his girlfriend Lisa, the apes are nothing more than the incarnation of an oppressed social class.  Still, it's impossible not to simultaneously sympathize with the oppressed simians and to fear their revolt.

At this point, however, Dehn's story-within-a-story grows a little ragged.  Since it's impossible to have the apes succeed within the story's timeframe-- an  alternate-world "1991"-- the ending must show Caesar winning only a temporary victory. At the film's conclusion he gives a ringing speech in which he and his people choose to stand down until the day humans destroy themselves and cede the planet to the oppressed class:

But now... now we will put away out hatred. Now we will put down our weapons. We have passed through the Night of the Fires. And who were our masters are now our servants. And we, who are not human, can afford to be humane. Destiny is the will of God. And, if it is man's destiny to be dominated, it is God's will that he be dominated with compassion and understanding. So, cast out your vengeance. Tonight, we have seen the birth of the Planet of the Apes!


It's a moving moment, in which the viewer can't help embracing this new society emotionally.  And yet, the original PLANET and even BENEATH demonstrate that ape society will be no better than the one that preceded it. Thus, despite the kinetic power of the ape-revolt scenes, Caesar's highflown rhetoric may be seen not as the filmmaker's endorsement of the revolutionary mindset, but as their almost-parting shot at false idealism underlying such rebellions.
Posted by Gene Phillips at 12:43 PM
Email ThisBlogThis!Share to TwitterShare to FacebookShare to Pinterest
Labels: the marvelous