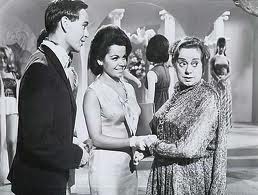 CAMPBELLIAN FUNCTION: *sociological*
The two pictures I'm reviewing here are linked only in that they were, in the respective times, pretty much aimed at the contemporaneous teen audiences.
I've never thought William Asher's "beach party" films ever deserved all the bad raps they received from critics, but I don't know if I'd make the same claim for AIP's attempt to do a couple of films along the same pattern, but not directed by Asher: PAJAMA PARTY and a subsequent film I'll review later, GHOST IN THE INVISIBLE BIKINI.  Both films were directed by longtime TV-guy Don Weis and written (or co-written) by Louis Heyward, whose writing credits are something less than stellar.  Without making any great claims for the Asher films, they have better comic timing and generally better acting than PAJAMA PARTY.  PARTY looks like one of those films where the actors are just marking time as they speak their lines, or, for that matter, sing an assortment of depressingly boring songs.
PARTY is sort of an alternate-world version of the Asherverse.  The comic biker-gang of "the Rats," starring Harvey Lembeck's "Erich von Zipper," seem to be the same characters, as does one character billed as "Candy," though this bikini-babe doesn't floor anyone with vibrations from her chassis.  But Annette Funicello, Don Rickles and Jody McCrea all play differently named characters, while Frankie Avalon makes a quick joke-cameo.
The lameness of the humor is capsulized by the name "Gogo," given to a Martian youth (Tommy Kirk) who's bent sent to Earth to scout it for possible invasion.  Gogo happens to show up near the home of wealthy eccentric Wendy (Elsa Lanchester, the film's only salute to a "monster actor").  Wendy has a connection to the beach-going teens in that one of them, McCrea's "Big Lunk," is her nephew.  At the same time Gogo arrives, a small group of crooks-- including Jesse White and Buster Keaton-- is attempting to find out where in the house Aunt Wendy keeps her cash.  Gogo becomes enchanted with Earth-girl Connie (Funicello), while Von Zipper enters the plot when he falls for Helga, the female member of the crooks.
There's not a lot to critique here.  All the plots involving the crooks hunting for the money are tedious, even those that give icon Buster Keaton a featured role.  There are a lot of sexy girls shaking their tushes, but the script's use of double-entendre is predictable.  There's the usual fight at the end between the beach-teens and the bikers, but aside from one or two cute bits the fight's nowhere as amusing as those from the Asher films.  Gogo proves to Connie that he's a Martian by waving his magic wand and making people and things fly around.  That's all there is, there ain't no more.
PAJAMA PARTY has one advantage over 2006's ALEX RIDER: the former's supposed to be absurd.
ALEX RIDER appears to be the only film based on a series of popular spy-books by Anthony Horwitz.  Whatever the strengths of the books, RIDER evidently didn't transalte them efficaciously to the big screen, even though Horowitz is credited with the screenplay.  Coming long after the boom of "teen/kid spy films" like the SPY KIDS series (beginning in 2001) and the AGENT CODY BANKS series (in 2003).
RIDER resembles the earlier films in that it essentially puts the hero (Alex Pettyfer) in a "Bond-lite" universe.  In such a world the hero encounters all the improbable super-organizations and is given assorted super-gadgets with which to fight them, but the world of cinema-Bond is made comic by the fact that the hero is a youngster.
But though the humor in the Cody Banks and Spy Kids films isn't incredibly sophisticated, at least those films manage to build artfully on the comic discontinuity.
The story's biggest problem is taking Alex Rider's travails too seriously, rather than keeping the material as light as it deserves to be.  For the first half of the picture the script takes its sweet time getting Alex on course to join a super-agency and avenge the death of his superspy uncle.  Improbably, Alex had no idea his uncle was a spy even though the uncle had him trained in rigorous martial arts (though Alex only does one kickass fight-scene in the movie).
Once Alex has been put on the trail of the villain who killed his uncle (Mickey Rourke, the best thing in the film), the story picks up a little.  But Horowitz's script tries to stick pretty close to reality, though there are just enough super-gadgets here (like a fountain-pen that can hypnotize people) to propel it into the category of "the marvelous."  But neither Alex, his protective "nanny" (Alicia Silverstone), nor the inevitable "romantic interest" ever incite much interest.
Oddly, this is the second time I found the performance of lead Alex Pettyfer less compelling than one of the support-characters, since in I AM NUMBER FOUR I rather wished the story had revolved around the character of "Number Six."
Posted by Gene Phillips at 3:45 PM
Email ThisBlogThis!Share to TwitterShare to FacebookShare to Pinterest
Labels: combative adventures, the marvelous