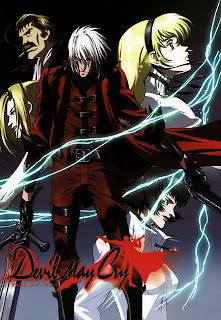 
As long as one approaches this 12-episode anime adaptation of the Capcom "hack and slash" video games as nothing but extravagant nonsense, one's likely to find it reasonably good fun.

There's never much backstory here to get in the way of the action. The white-haired hero Dante is apparently the offspring of a human and a demon, but though he's skilled with both guns and a big ol' blade, he can only make ends meet by running a demon-hunting business (given the unexplained name of  "Devil May Cry").  Most of the episodes are fairly repetitive-- a customer importunes Dante to help with his demon troubles, and after a little suspense about the where and when to find the critter, Dante dispatches the malfeasant with copious amounts of gut-bursting violence.

Dante is, however, saddled with a few "human" characteristics that don't play any more believably than those Hayao Miyazaki gave to his heroic character in HOWL'S MOVING CASTLE.  He's incredibly indolent and constantly borrows money from others.  In addition, he's never seen eating anything but pizza and strawberry sundaes.  Apparently being half-demon gives one the power to eat fattening foods and remain eternally buff.  Still, he remains largely unflappable and low on affect in the tradition of badass devil-hunters everywhere.

Naturally, the more human elements come from Dante's support cast.  The most effective are two characters created for the anime show: Morrison, an agent who finds Dante jobs and functions as a sort of "older mentor" figure at times, and an orphan girl named Patty, who encounters Dante in the first anime episode and decides to move in to the devil hunter's digs, essentially playing "mother" to him by yelling at him for not cleaning his place.  The other two hail from the video games: human demon hunter "Lady" and demonic demon hunter "Trish," both of whom are incredibly hot babes who are implicitly warm for Dante's form.  However, no actual romance ever gets off the ground to distract from the ultraviolence.

Most of the episodes are pretty much alike, but all benefit from a good head-bopping "heavy metal" theme tune.  Dante's best antagonist appears in Episode 2, a sort of "motorcycle demon" who lures bikers to their death.  However, the best episode overall concerns the first meeting of Lady and Trish, who try to kill each other even before they learn of their mutual acquaintance with Dante.

Though demons and hell are frequently referenced both of them are just video-game constructs with no metaphysical depth.  The psychological angle of giving the emotionless hero a little girl sidekick to nag him all the time is a minor accomplishment, however.
Posted by Gene Phillips at 3:43 PM
Email ThisBlogThis!Share to TwitterShare to FacebookShare to Pinterest
Labels: combative adventures, the marvelous