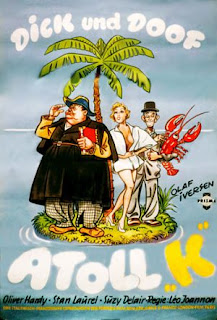 My only reason for writing about the last Laurel and Hardy film here is because the film gets mentioned in some compendia of fantasy-films, notably John Stanley's CREATURES FEATURES guides.

However, the film really has no fantasy-elements, not even those I would categorize as "uncanny."  The most I can say is that because it revolves around Stan and Ollie building a new country on an atoll newly-risen from the sea, it does loosely fit the intent of the "exotic lands and customs" trope.  Still, in all ways both the atoll and its inhabitants are entirely naturalistic and mundane in their presentation.

One of the more curious plot-aspects of UTOPIA is that it starts with Stan and Ollie journeying to a real island, which they've inherited along with a yacht that can take them to it.  (They also inherit some money, but government taxation empties their pockets before they can touch so much a dollar.)  But instead of reaching that island, they-- along with various other societal castoffs-- get stranded upon the atoll.  The essential idea here was that because the atoll was new land, it was the only place the script could put forth its one idea: that of the two eternal bumblers attempting to form their own country.  The best joke to arise from these muddled goings-on is that of the five people who make the atoll their home-- Stan, Ollie, a cook, a stowaway and a girl fleeing her fiancee-- all four except Stan elect themselves to offices, leaving Stan to be "the people."

Naturally the pacific state of affairs can't last.  Uranium is discovered on the atoll.  Possibly this is a "science fictional" element that also causes Stanley and others to include UTOPIA in their fantasy-film lists, but if so, I think such a reason has even less justification than any "exotic lands" trope.  In any case, get-rich-quick types flock to the island, and "the Boys" can't do anything about it, because their Utopia has no laws (and, parenthetically, no taxation).  After they gallantly come to the defense of their female friend, they get their skulls clonked by the usual L&H bully, who then decides to take over the atoll and hang the previous owners.

After assorted skirmishes, the Boys and their allies escape.  Their three friends go back to their regular lives for the most part, while S & O finally reach their inherited island-- only to find the hand of the Tax Man is once again a long one.

As many others have observed, this French-Italian outing isn't very funny, though I'm no test of it as I'm one of those rare viewers who just doesn't get much out of Laurel and Hardy.  I acknowledge that they had something special, but it doesn't reach me.  I will say that the constant animadversions on the evils of taxation are a little amusing, and definitely different from most of what the Boys had been doing in Hollywood.  Allegedly Laurel, who was in ill health during the film's production (as was Hardy), encouraged some re-working of the original script, but it seems there was only so much he could do with the proverbial sow's ear.
Posted by Gene Phillips at 3:56 PM
Email ThisBlogThis!Share to TwitterShare to FacebookShare to Pinterest
Labels: exotic lands and customs (n), the naturalistic