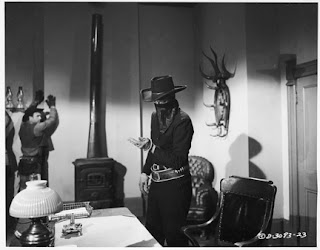 
THE KID FROM BROKEN GUN was the last of Columbia's DURANGO KID series of matinee westerns, which had an unusually long run of 64 films.  The gimmick was simple and roughly derivative of the Lone Ranger (sans Tonto).  Whenever frontier justice needed to be doled out, a mystery man clad in black, and masked by a simple black bandanna, showed up to corral any and all owlhoots.  The Kid had no special gimmicks like the Ranger's silver bullets; just that black outfit and apparently the charm of Charles Starrett, the actor who portrayed him in all the entries (though the Kid's fight-scenes were provided by experienced stuntmen like Jack Mahoney).

Much of the story unwinds in a courtroom, which doesn't exactly make for strong sagebrush action.  It seems Jack, who was dating lady lawyer Gail Kingston, became irate with another man who pursued Gail, so that when the rival was killed, Jack became murder suspect number one.  Gail defends Jack in court, though the judge isn't shy about stating that he thinks that women ought to stay home in the kitchen instead of practicing the law.

This almost sounds like a setup to make Gail one of the "strong women" seen in liberal westerns of the 1950s, but as it happens Gail turns out to be one of the louses conspiring to frame Jack, as part of an overly complicated scheme to secure a cache of lost Spanish gold.  So much for pioneer feminism.  After the Durango Kid runs around investigating suspects for a while, he ends up convening his own "trial." With the threat of his gun the Kid forces the judge, the defendants, the real villains and a passel of onlookers into a sham court and questions one of the villains on the witness stand.  When the mangy coyote proves reluctant to confess, the Kid philosophizes that since he's already appointed himself "judge and jury" over this trial, he may as well play "executioner" as well.  The villain confesses, Jack is exonerated and no one in the town, including the judge, bears Durango any hard feelings.

As noted the action sequences are weak, perhaps reflecting the fact that everyone knew the series was finished.  Smiley Burnette offers his same cornpone humor, with the added touch of having a weird dream about being condemned in court.  Oddly the title refers not to the Durango Kid, but to a nickname for Jack, who once boxed professionally under the title.  Since the nickname never has any significance in the disjointed story it's possible someone at Columbia thought of spinning Mahoney off as a new "kid" hero.  However, Columbia soon terminated its matinee westerns in light of competition from television, which is where Jack Mahoney showed up not long after as the star of the "Range Rider" series.

In almost all ways GUN is a naturalistic western like hundreds churned out by the studios of the time.  Nothing except the "outre outfit" of the Durango Kid moves it into the domain of the uncanny-metaphenomenal.  But as I've noted elsewhere, particularly my review of this "Lone Ranger" film, the hero's mask in this sort of film becomes more than just a mundane device, as it is for some of the villain's hirelings, who also go about masked with bandannas for a few minutes. Though I doubt that I'll ever see the majority of these outlaw-chasing oaters, I'd tend to classify them all as metaphenomenal works.  The scene in which the black-clad masked man threatens the villain with execution gives that scene a touch of the uncanny that one would never get from a similar threat made by Gene Autry.

Director Fred F. Sears continued to direct assorted genre-works for the remainder of the decade, including a foursome of SF-films that included THE GIANT CLAW, whose script was considerably kinder to female professionals than GUN.  One of GUN's two writers was Ed Earl Repp, who seems to have written nothing but westerns for cinema but had a long enough history as a pulp SF-writer that fellow pulp-writer Gardner Fox named a villain after Repp in this 1960's Batman comic: 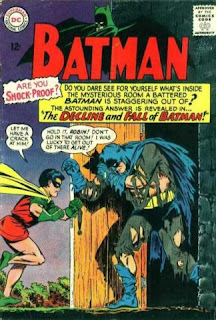 Posted by Gene Phillips at 1:55 PM
Email ThisBlogThis!Share to TwitterShare to FacebookShare to Pinterest
Labels: combative adventures, outre outfits (u), the uncanny