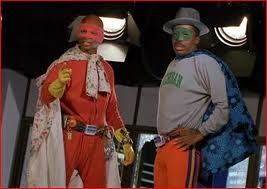 I can't say I found BLANKMAN very funny, but as the above illo shows, the two black stars (Damon Wayans, David Alan Grier) don costumes that make them look REALLY bad.  That does demand a special sort of *chutzpah.*

The film has its most amusing moments toward the start, when Wayans' Darryl and Grier's Kevin are seen as children, geeking out over the 1966 BATMAN show while trying to watch it on a malfunctioning TV set.  Then the two kids quickly grow up-- or at least one of them does, mentally speaking.  Kevin becomes a normal guy who works for a television news show, where he lusts after anchorwoman Kimberly (Robin Givens).  Darryl remains frozen in geekhood, working on various absurd and worthless inventions while being supported by Kevin and cared for by their grandmother.

Crime, under the control of mob boss Minelli (Jon Polito), runs rampant in a city where the police are both lazy and chicken-hearted.  Darryl and Kevin's grandmother practices social activism and gets rubbed out by Minelli's thugs.  The more childlike Darryl takes her loss harder than Kevin does, but he also has the more proactive response.  Though he can't fight, he does possess enough science-knowledge to design a bulletproof superhero costume for himself.  He succeeds in his first crimefighting efforts by luck and gumption, but when he attempts to tell people his hero-name is "Blackman," he's misunderstood and the press dubs him "Blankman."  Darryl invites Kevin to join him as his crimefighting partner.  Kevin declines.

To Kevin's dismay, crusading reporter Kimberly falls for the mysterious stumblebum superhero.  But when Minelli's crooks stage a trap for Blankman, Kevin steps up, dons his costume, and uses his karate-skills to fight alongside his dotty brother.  Darryl does have a few oddball inventions that help them out: some funky jet-skates, a bomb-sniffing robot made from a old washing-machine.  These, being slight improvements on then-current technology, would be subsumed under the phenomenal category of the uncanny, except that the bulletproof costume qualifies as a marvelous invention..

Though the script validates the wishful thinking of childhood, the theme isn't pursued with any rigor.  Polito's Minelli is, though not a supervillain, slightly bigger-than-life: he boasts of wearing pure satin clothes when he robs a bank and rises to the comic-book model by constructing a death-trap for the captured heroes.  Givens plays her Lois Lane role straight, which allows her to be a decent foil to Wayans' antics.  The most interesting theme suggested by the sibling rivalry between Darryl and Kevin.  This has less to do with their sexual competition for some Freudian mother-figure (though Kimberly does echo the grandmother's social activism) than with the fact that Kevin has to be the "father" in the relationship, trying to force his simple sibling to grow up.  Darryl, the "fantasy-principle" to Kevin's "reality-principle," rarely shows overt resentment toward Kevin, although I did find it significant that Kevin gets shot, albeit nonfatally, because Darrly neglects to tell him that his superhero suit ISN'T bulletproof. 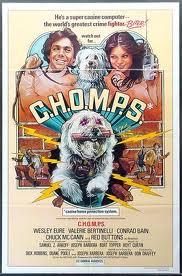 CHOMPS (which I refuse to keep typing with the damned periods) has three scripters but the main story is credited to long-time cartoon-producer Joseph Barbera.  Possibly the most entertaining section of the film is the animated credits-sequence, which shows an enemy spy being repeatedly undone by a clever dog, who at one point utters a "wheeze-laugh" like that of the Hanna-Barbera cartoon-dog "Muttley."

I file this one under the "psychological" Campbellian function simply because the main plotline centers around a trope almost as old as Greek Old Comedy: Young Man desires Young Woman but must first validate himself with Young Woman's father.  But this element is kept to a very simple level, for it's clear from the start that this is a low-impact kid-oriented comedy, tied to children's love for dogs-- including the robot dog of the title, whom the Young Man invents in order to impress the Young Woman's father.  To be sure the film did come out in a PG version in 1979-- the only offensive material stemming from the "salty language" of another dog-character who can think like a human being.  The filmmakers also released a "G" version, which was probably more in line with the script's basic nature.

Simple comedies have their own charms, of course.  However, Barbera's story doesn't show an awareness as to how to increase tension, even after the example of vanilla-but-still-endearing comedies like Disney's THE COMPUTER WORE TENNIS SHOES.  The film starts out with the Young Man (Wesley Eure of LAND OF THE LOST) demonstrating to his girlfriend how his robot dog will be the next great thing in crime-prevention. If BLANKMAN was indebted to the myth of Batman, CHOMPS patterns itself on Superman.  Not only does "Chomps" possess super-strength, super-speed and X-ray vision, the aforementioned "thinking dog" even recites his take on the old Superman slogan: "It's a bird, it's a plane, it's Super-dog!"

But in contrast to BLANKMAN, CHOMPS doesn't come up with decent villains who might ratchet up the tension, even for a kid's comedy.  The main villain, played by Jim Backus, depends on two bumbling crooks to uncover the secret of "Chomps."  The mere fact that this character can't find better-- or at least funnier-- help made me long for the comparative ruthlessness of Cesar Romero in the TENNIS SHOES film.  Once Barbera's script establishes the wonderment of the powers available to "Chomps" (played by the canine star of the "Benji" flicks), said script keeps repeating similar stunts over and over, as if it were stapling a bunch of unassociated cartoons together.

By 1979 director Don Chaffey had done a number of "animal-pictures," including Disney's THREE LIVES OF THOMASINA, which also made considerable use of an "varmint voiceover."  His direction here is pedestrian, but it's no more than the script deserves.  CHOMPS looks to have been his last animal-focused effort.  Fantasy-fans are more likely to remember for such disparate works as 1963's JASON AND THE ARGONAUTS and 1975's PERSECUTION.

The best aspect of this dog of a movie is the familiarity of the cast: Eure, Backus, Valerie Bertinelli, Conrad Bain, and even bungling henchmen Chuck McCann and Red Buttons, despite the laugh-impaired script they execute.

I regard both of these as "combative comedies" because both do build on superhero tropes, though CHOMPS is something of a stretch.


ADDENDA: Changed my mind on the latter pronouncement: the dog's blundering opponents are too low-energy to allow for the combative mode.


Posted by Gene Phillips at 2:39 PM
Email ThisBlogThis!Share to TwitterShare to FacebookShare to Pinterest
Labels: combative comedies, the marvelous