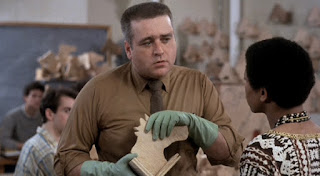 The tagline for STUDENT BODIES was insufferably pretentious: "At last, the world's first comedy horror movie."  Even unseasoned neophytes among the mavens of horror will know that this was nonsense.

What the advertisers may have meant to say was that BODIES was the first comedy version of the slasher subgenre.  Even that is debatable.  The statement works only if one considers a "slasher" to be nothing but that particular type of horror-film commercially nurtured by the successes of HALLOWEEN (1979) and FRIDAY THE 13TH (1980), and leaves out all of the many precursors of the slasher-flick, some of which had comedic versions.

BODIES has a handful or two of funny lines or situations, particularly those revolving around the above-seen slasher-suspect Mr. Dumpkin, the shop teacher with a fetish for horsehead bookends.  However, as one slogs through all the stuff in BODIES, there's probably ten jokes that don't work for every one that does.  I suspect that the script by one-time director Mickey Rose (whose directorship was aided by an uncredited Michael Ritchie, according to imdb) was one where he didn't work too hard to prune away the unfunny stuff.  Possibly he thought the intended audience would accept pretty much anything aimed at the then-popular slasher genre-- an attitude we still see in the rash of transitory spoof-films like EPIC MOVIE, DISASTER MOVIE. On the other hand, Rose's best-known film-scripts-- his collaborations with Woody Allen on BANANAS and TAKE THE MONEY AND RUN-- were also marked by a scattershot approach to comedy.

Given that Rose is taking a "kitchen-sink" approach to spoofing the slasher genre, it's perhaps a miracle that he hit any of his more-than-obvious targets.  First and foremost, Rose goes after the supposed "prudish" reputation of the slasher-film, in which "loose" women are victimized while those who are more reserved are expected to survive.  His viewpoint character, the androgynously named "Toby," dresses primly and rejects the tendency of her high-school peers to have constant sex.  Meanwhile, an unseen heavily-breathing assailant-- called "the Breather" from the very beginning-- is knocking off teens and putting them in plastic garbage bags.  Strangely, as if in response to the accusation that slasher-films disproportionately target women, most of the killings include both one horndog male and one slutty female.  Toby confesses to the school psychologist that she came to despise sex when "my father locked me in my room-- with him in it."  Nevertheless, she's more upset by the repeated killings at her school, and determines to find the killer, even if it means dressing up like a slut herself.

It's hard to take seriously any of the film's junior-league Freudianisms, except for one...

... in which it's revealed, long before SCREAM (but way after BLOOD AND BLACK LACE), that the one killer is actually two. In this case, it's the principal and his aged secretary, who are acting out the role of repressive adults cutting down the flower of youth.  They're even strictly hetero in their killings, with the female secretary killing all the young males and the male principal taking out the females.  This is the closest Rose gets to some insightful psychological mythicity.  So of course it's nothing more in his hands than a toss-off.

In my categories above I've labelled this film "marvelous," which requires a little explanation.

Up to a certain point in the film, it appears to be a comic take on the trope of the "perilous psycho."  There are absurd things that happen, but none of these are supposed to be real within the diegesis.  These nonsense-bits would *normally* call for the label of naturalistic "delirious dreams and fallacious figments..."

Except that near the end Toby wakes up from what has been an extended dream-- i.e., a "delirious dream" in the uncanny phenomenality, since it does interrupt the diegesis.  And so again BODIES seems to be in a different category of the uncanny--

Until Rose's script takes one more (thankfully brief) tangent, this time into the phenomenality of the marvelous, when (1) Toby, liberated by her dream from her old prudery, attempts to get with her boyfriend for some lovin', (2) he kills her for being loose, and (3) as he visits her grave, her hands burst CARRIE-style from the ground and grab him, at which point the image freezes and the film ends.

Perhaps Rose thought that this derivative tip of the hat to the dePalma film would help audiences remember and recommend his low-budget, no-name-cast flick.  Perhaps he meant it as some acknowledgement that frumpy Carrie White seems a closer model for Toby than slasher-heroines like Jamie Lee Curtis. But either way, it may be the single lamest joke out of many in STUDENT BODIES.


Posted by Gene Phillips at 3:30 PM
Email ThisBlogThis!Share to TwitterShare to FacebookShare to Pinterest
Labels: the marvelous