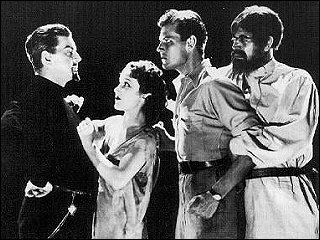 One of the most interesting manifestations of the "bizarre crimes" trope is the one spawned by Richard Connell's 1924 short story, "The Most Dangerous Game," that of the obsessed hunter who chose to hunt the "most dangerous game," his fellow human beings.  In its basic conception it sounds like the sort of thing the Marquis de Sade might have conceived, insofar as it presupposes a powerful man's intrinsic right to use other men for his pleasure.

Yet prior to conceiving my theory I never knew why so many fantasy-film concordances included it.  The idea didn't violate any aspect of natural law, nor did it have the spooky tone of the non-fantasy horror films.  In substance it seemed more of a naturalistic suspense-thriller.  At best I assumed that the compilers considered the villain some sort of psycho, like author John McCarty, who included MDG in his book MOVIE PSYCHOS AND MADMEN.

However, I think my trope "bizarre crimes" explains the metaphenomenal tone of the story and some (though not all) of its adaptations.  Both in the story and the 1932 film, the villain Count Zaroff might be called mad, but he never shows the frenetic quality one associates with the "psycho."  Zaroff seems utterly convinced that he should have the right to hunt humans, so that in tone he comes closer to daring criminals like Ian Fleming's Goldfinger, who want to create dazzling new crimes simply for the sake of so doing.

Direction in the definitive (so far) 1932 film is credited to both Irving Pichel and Ernest P. Schoedsack.  It was the first metaphenomenal film either man directed, and its fast-paced, intense style looks forward to a simiilar quality in 1933's KING KONG, directed by Schoedsack and Merian C. Cooper.  Leslie Banks gives Zaroff the same brooding quality one finds in horror-performers of the same era, but whereas most goodguy-protagonists in horror films are weak sisters, Zaroff finds a formidable match in the form of fellow big game hunter  Bob Rainsford (Joel McCrea), in spite of the fact that Zaroff also has one of sound cinema's first "mute servants" and a pack of dogs on his side.  Zaroff has two other guests on his isolated island-paradise, Eve and Martin Trowbridge. The latter, an annoying comic drunk, exists to be the first victim (or at least the first one the audience sees) of a Zaroff hunt.  Later Eve becomes the "prize" which Zaroff plans to claim once he's finished off Rainsford.  As Eve, Fay Wray, a few months away from film immortality as "the girl in the hairy paw," doesn't get a lot to do, but she does show courage in choosing to be hunted alongside Rainsford.  The exciting climax necessarily expands on the too-brief battle of Rainsford  and Zaroff in the original short story.

The 1956 RUN FOR THE SUN, however, never exploits the bizarre nature of the villain's crime to the same extent as the 1932 film.  Indeed, SUN is barely a remake of the original concept, for it's been retooled extensively to place more emphasis on a pedestrian romance between nature-writer Mike Latimer (Richard Widmark) and Katie Connors (Jane Greer).  Indeed, their budding romance consumes about thirty minutes of film-time before the two of them crash land in a remote section of Central America.  There they meet a courteous-seeming recluse named Browne and his coterie of armed men-- only to suspect that something's wrong when their downed plane disappears.  It soon comes out that Browne and one of his men-- his brother-in-law, in fact-- are ex-Nazis who have fled Europe to avoid prosecution, and they don't want anyone knowing where they are.

However, Browne has none of the Promethean evil of Zaroff; if anything, he's tormented by the loss of a lady-love.  He professes no Nazi philosophy, having been mostly a fellow-traveler, though there is a mention of Nietzsche amid his reading-material.  However, when he does get around to hunting Mike and Katie, it's simply because they're trying to escape him, not because he has the outsize idea of being a Hunter of Men.  Because SUN lacks any grandiosity to its "bizarre crime," I assign it, and the film, the status of "naturalistic."

ADDENDUM (9/16): I don't know why I failed to gauge it properly, but the 1932 version of MOST DANGEROUS GAME is without a doubt a "combative drama." Heck, Rainsford even defeats one of Zaroff's men by breaking his back with a wrestling-hold-- and you don't get much more spectacular than that.
Posted by Gene Phillips at 4:21 PM
Email ThisBlogThis!Share to TwitterShare to FacebookShare to Pinterest
Labels: bizarre crimes and crimefighting (n), bizarre crimes and crimefighting (u), combative dramas, the naturalistic, the uncanny