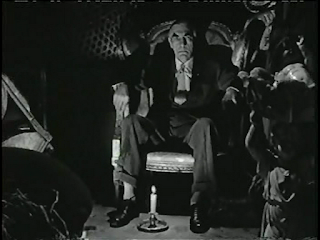 
The French horror-thriller DIABOLIQUE (1955) earned good box office in America, a success which facillitated Alfred Hitchcock's adaptation of Robert Bloch's novel PSYCHO in 1960.  Seth Holt, directing an original script by Jimmy Sangster, actually comes closer to the basic plot/counterplot structure of the 1955 film, and delivers a strong thriller as well, though not by any means equal to the example of PSYCHO.

When I viewed SCREAM a few years back, I tended to view it through a quasi-Freudian lens.  After all, the film centers upon young crippled heiress Penny Appleby(Susan Strasberg), who has been estranged from her wealthy father for ten years following his divorce of her mother (deceased at the time of the film's beginning).  Having lived in Italy all that time, she returns to the France-based estate of Mr. Appleby, who by this time has married another woman, Jane (Ann Todd).   In Freudian terms, one might well read this scenario as that of the daughter coming to "rescue" her father from a "bad mother," or to be sure, a bad stepmother.  At one point Jane shows herself aware of this sort of scenario, though she protests against being thought of as an evil stepmother out of "fairy tales," not Freudian wishdreams.

Penny's return to her family home, however, is marked by the absence of the father she may have come to "rescue."  Jane and her faithful chaffeur Robert insist that Mr. Appleby has simply left on business and plans to return. But why then does Jane start seeing the corpse of her father popping up at times, only to disappear when anyone else comes to look?  Is Penny the sort of "perilous psycho" (as in BLACK SWAN)  who poses more danger to herself than anyone else?

Though I sometimes anatomize certain film-plots in detail when I feel that it justifies a deep reading, my recent re-viewing of SCREAM convinces me that it doesn't justify such a treatment.  SCREAM is a very skillful blend of suspense and chills, but there's less here than the sum of the screenplay's clockwork parts.  In part this is because the film telegraphs its indebtedness to the so-called "rational Gothic" narrative, in which an apparent haunting is merely a set-up designed to drive someone insane.  Penny's sanity is never seriously in question, so it's plain that we have a "phantasmal figuration" brewing, the only mystery being the identity of the culprits.  The hoaxers' plot is the sort of thing that feels pretty ingenious while it's being related within the context of the film, but in keeping with Hitchcock's famed "refrigerator logic," Sangster's scheme unravels in the cold light of day.  The same thing applies to any psychological tropes, Freudian or otherwise, that one might hope to descry in the film.  Because Penny herself, in the DIABOLIQUE tradition, isn't what she seems either, her inner workings prove subordinate to the mechanics of the plot.  It was Hitchcock's genius that he could disclose revised motivations without losing the sense of the significance of the psychological tropes suggested.  In his hands, a character like Jane Appleby-- who is seen to "steal" men from both the older and younger generations-- might have become a more emotionally charged figure, but Sangster only uses her to connect his dots.

Sangster and Holt, admirable as they are, are no Stefano and Hitchcock.
Posted by Gene Phillips at 3:27 PM
Email ThisBlogThis!Share to TwitterShare to FacebookShare to Pinterest
Labels: perilous psychos (u), phantasmal figurations (u), the uncanny