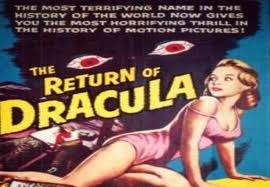 
Originally I thought I'd celebrate Halloween with a review of a "hallowed" monster, namely that of 1958's RETURN OF DRACULA.  But since that film has been so often compared to Alfred Hitchcock's 1943 suspense-film SHADOW OF A DOUBT-- which I also re-screened recently-- I decided to make this a compare-and-contrast essay.

In keeping with most of Hitchcock's oeuvre, DOUBT generates suspense by presenting how such extreme phenomena as violence and psychosis burst forth from apparent normality.  In this case, Uncle Charlie (Joseph Cotten) is fleeing detectives seeking him as the suspected "Merry Widow" killer, known for marrying and murdering rich old women.  To escape the detectives the killer goes to ground in the small town where he was born, where his sister Emma has married Joseph Newton, a dull but respectable banker.  Of the Newton family children, one teenaged girl, henceforth tagged "Young Charlie," has been named after the long-absent uncle.  When Young Charlie learns that her well-traveled uncle is coming to town for a prolonged stay, she's ecstatic, for the girl is largely bored with her humdrum existence.

The skill of Hitchcock and his three writers (one of whom, Thornton Wilder, had already become celebrated for another take on small-town life in 1938's OUR TOWN) is that the story offers no clear choice between the deadening routine of ordinary existence-- where, significantly, Young Charlie's father and his best friend debate on the best ways to murder one another-- and the superficial charm of Uncle Charlie, which masks a near-psychotic misogyny.  Slowly Young Charlie's adulation of her exotic uncle turns to horror as she uncovers his identity, though the knowledge of his murders may not be as bad as being forced to see the world in his cynical terms:

You live in a dream. You're a sleepwalker, blind. How do you know what the world is like? Do you know the world is a foul sty? Do you know, if you rip off the fronts of houses, you'd find swine? The world's a hell. What does it matter what happens in it? Wake up, Charlie. Use your wits. Learn something. 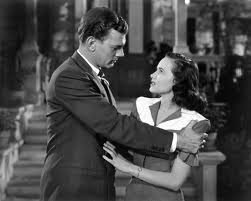 Like most of Hitchcock's works, DOUBT is entirely naturalistic.  There's nothing strange or unworldly about Uncle Charlie; he's a reflection of not only his own personal psychotic quirks but also of the overturning of all of society's standards and rules.  Some critics have suggested that there's a subtext of incestuous fascination between Charlie and his sister Emma.  So it may be no coincidence that Emma has married a banker, while psycho-Charlie rails against the women he's killed, the women "smelling of money."

Paul Landres' RETURN OF DRACULA is nowhere near this ambitious, for all that it also centers on a young female in a small town being victimized by an exotic relative.  However, one of the strongest disparities between RETURN and the earlier film is that there is no actual familial relationship between the two.

Interestingly, the film begins not with Dracula but with an ordinary Eastern European man, Bellac (note the name) Gordal, first seen preparing to debark on a train that will leave his homeland, so that he may reside with his relatives in America.  Though there are no overt mentions of Communism, Bellac's well-wishers congratulate him on having achieved "freedom" by journeying to America.  Bellac never makes it, for Dracula is on the same train.  The vampire lord kills Bellac, disposes of the body, and takes Bellac's place on the trip to America, and a different type of "freedom."  Later Bellac/Dracula echoes the earlier comment on freedom, but the vampire wants the freedom to expand a new empire onto virgin territory.  There are no sociological parallels between the vampire and European Communism, however: Dracula's kingdom, as he himself later says, is the kingdom of death.

Like Young Charlie in the Hitchcock film, teenaged Rachel also idolized her foreigner uncle, though this time she's never met him; they've only exchanged letters.  Like Young Charlie, Rachel is the only one in her family--consisting of widowed mother Cora and pesky little brother Mickey-- who's discontented with her drab existence.  (Interestingly, the family name is "Mayberry," but it's two years before that name would become emblematic of small-town life thanks to the ANDY GRIFFITH SHOW.)  However, neither director Landres nor writer Pat Fielder-- who also collaborated with Landres on THE FLAME BARRIER-- suggest that Rachel's discontent is more than superficial teenaged rebellion.  After "Cousin Bellac" shows up to meet the family at the train station, he charms Rachel, her mother and her brother, but not so much Rachel's boyfriend Tim. Prior to finding out Bellac's true nature, Rachel constantly insists that Tim ought to be more cultured like Rachel's worldly older cousin.  However, she yields easily to his juvenile displays of affection, so her attempts to reshape him must be seen as no more than feminine assertiveness, not real discontent with her life.

There's no interaction to speak of between Cousin Bellac and the widowed mother, but this time the young boy has a little more to do than provide comedy relief.  In fact, before Dracula even arrives in town, Mickey coincidentally stumbles across the place that will serve as this Drac's secluded Carfax Abbey: an abandoned mine, marked with a sign reading "Open Pit."  Though the film isn't heavy on Christian symbolism, I can't resist noting what the word "pit" usually connotes in that sphere.

In fact, an inadvertent sacrifice takes place in the old mine, for Mickey's cat wanders off and gets stuck down in the aforementioned pit.  Mickey sees the cat and runs to get help, but the arrival of Cousin Bellac takes up everyone's attention.  When Mickey comes across his cat later-- it's not clear where the boy finds the feline-- the pet has been bled and killed.  It's rather unusual for traditional vampires to feed on animals, but the detail is largely a means to show the audience that Dracula has taken up residence in the old mine.

In a rather complicated arrangement, Cousin Bellac merely pretends to sleep by day at the Mayberry residence.  In fact, he spirits himself away to the mine, where he's set up his coffin.  Presumably the coffin is filled with the earth of his native land, as per the mythology of Bram Stoker, though the film doesn't say so, and doesn't say how Cousin Bellac transported the coffin to the mine.  One assumes that the coffin was shipped on whatever transports took Bellac to America, which suggests that Dracula went through a great deal of preparation to assume Bellac's identity.

In any case, whenever Rachel or anyone else ventures unexpectedly into Cousin Bellac's room, he's simply not there-- which may be a reason that the British release of the film was called "The Fantastic Disappearing Man."

Dracula, though not too picky to feast on a cat, doesn't pursue either Mickey or Cora, and can't immediately vampirize tasty Rachel since she regularly wears a crucifix.  Also in Stoker-tradition, he decides to go after one of Rachel's friends first; a young blind woman to whom Rachel reads books.  In a tense scene, he comes to blind Jennie at night, asking her if she can see him.  She responds that she can, just before he kills her-- but not permanently.

Jennie's death doesn't immediately tip off Rachel, but it does heighten her suspicions somewhat.  Bellac comes to Rachel in dreams, attempting to make her get rid of the crucifix.  Meanwhile, Dracula himself has been followed to town-- just like the detectives pursuing Uncle Charlie in DOUBT-- by men from his native country who know his true nature.  In wolf-form the vampire kills one of the pursuers, but not before he gets photographic proof that Cousin Bellac doesn't show up in photographs.  This enables the other pursuer to gain the help of the local minister and the sheriff in opening Jennie's crypt.

This event takes place at the climax, just as Rachel and Tim have found their way to the old mine.  Dracula, though he's already revealed his vampiric nature to Rachel earlier, attempts to make Rachel surrender her crucifix, first with blandishments, then with vampiric hypnotism.  He's briefly set back when Jennie is staked, for Dracula feels the pain of the stake empathically.  But in the end Rachel's crucifix has the main triumph, causing Dracula to back away from her until he falls into the pit (forgetting how to change into a bat?) and gets staked on some pointy mine-timbers.  One might say that the Lord of Death is finally returned to the pit where he belongs, to say nothing of suffering the same fate as his first American victim.

While there's not much likelihood that Landres and Fielder weren't influenced to some degree by SHADOW OF A DOUBT, RETURN OF DRACULA displays its own strong creative identity.


Posted by Gene Phillips at 4:01 PM
Email ThisBlogThis!Share to TwitterShare to FacebookShare to Pinterest
Labels: perilous psychos (n), the marvelous, the naturalistic