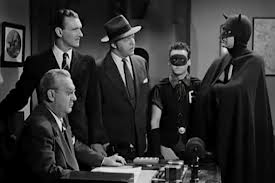 
Two bat-flights this time out, one sanctioned by DC Comics as a legitimate adaptation of BATMAN, the other meant to ride the coattails of the sixties' successful Bat-teleseries.

In my review of the 1943 Batman serial, I said that although the production values were "cheapjack," director Lambert Hillyer occasionally gave certain scenes an Expressionistic flair in keeping with the original inspirations of the comic book series.  The serial also benefitted from a pleasingly hateful villain, even if he isn't politically correct in modern times.

In contrast, Columbia's second and last Batman serial lacks any virtue except the sort of fast action characteristic of serial-king Spencer G. Bennett.  Unfortunately, because the budget still isn't good enough to give the titular heroes decent costumes, the action-scenes look much less impressive than in Bennett's strongest serial-works, such as 1943's MASKED MARVEL.  Robert Lowery takes over the role of Batman but doesn't manage the Zorro-esque charm of the previous actor, while John Duncan rarely impresses watchers with anything but the sense that he's far too old to be a "boy wonder."

The serial does at least score with a powerful masked villain, the Wizard, who boasts abilities of hypnotism and (eventually) invisibility.  However, his main raison d'etre is that he commands a machine that allows him to control cars and other motor-vehicles remotely, which seems like a rather punk device next to, say, the Flying Wing seen in both 1937's DICK TRACY and 1938's FIGHTING DEVIL DOGS. There's not much suspense devoted to revealing the villain's identity in that the serial provides a prominant red herring but no "least likely suspects."  On the whole BATMAN AND ROBIN's best moments are those that proved unintentionally funny, as when Batman fights a hood who accidentally (?) rips off his cape, whereon the hero tries to re-don it during the fight. 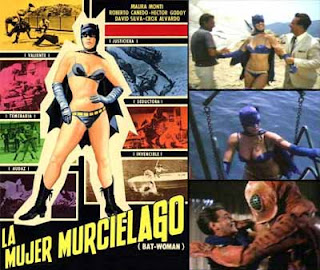 BATWOMAN, unfortunately, doesn't have even "so-bad-it's-good" moments.  For once, though we do have a Mexican superhero-character who wrestles (albeit only briefly), Batwoman doesn't seem to be a wrestler by profession.  One of her allies tells the audience that she's independently wealthy a la her model Bruce Wayne, though she chooses to be a selfless crimefighter.  Played by Maura Monti, Batwoman doesn't have any weapons except her sexy body, and only has one semi-lengthy fight against the thugs employed by her opponent, the mundanely named "Dr. Eric Williams."

Williams follows the pattern of many previous "luchadores" films in which wrestler-heroes battle mad scientists.  In particular Williams and his aides are attempting to breed an army of gillmen with which to take over the world, or something like that.  Williams has no particular motivation beyond being a standard mad scientist, and his gillmen are just the usual men-in-suits, given no great flair by director Rene Cardona Sr.

I realize that Cardona directed many, many more films than what most Americans know of his oeuvre, which is mostly the superhero/horror films.  However, I've found the few works I have seen pretty dull going, and that includes BATWOMAN, which includes a lot of slow-going underwater location scenes.  I've mentioned that Monti only gets one fight-scene, but aside from some sub-sea gymnastics, she spends a lot of time in conversational scenes.

I can imagine a lot of fantasy-fans enjoying BATWOMAN just for its virtue of simplicity: it certainly never pretends to be anything more than what it is. But I'd rather re-watch what may be Cardona's best such film, the far more lively "luchadora" film DOCTOR OF DOOM.
Posted by Gene Phillips at 3:50 PM
Email ThisBlogThis!Share to TwitterShare to FacebookShare to Pinterest
Labels: combative adventures, the marvelous