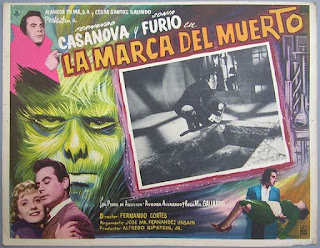 I've seen my share of Jerry Warren productions-- both those in which he directed original (so to speak) films and those in which he purchased other director's films, cut them up and inserted a few scenes he'd directed with American actors.  Everything I've seen has been thoroughly mediocre but no more so than a lot of films in his time period.

CREATURE OF THE WALKING DEAD, which I recently screened for the first time, baffles me.  I've seen a fair number of low-budget affairs whose makers seemed to be speaking their own private storytelling language-- usual suspects including ROBOT MONSTER, GLEN OR GLENDA, etc.

CREATURE doesn't seem to have its own private language, but it seems just as incomprehensible.  And this seems odd, since in every way it looks like a typical mad-scientist film of the period.  In this case, it involves Martin Malthus, a modern-day (circa 1960) scientist who foolishly brings back the "walking dead" of his ancestor John Malthus.  The ancestor was executed at the close of the 19th century for trying to create an elixir of immortality with the blood of murdered maidens, so no one, except perhaps Martin, is surprised that as soon as he's revived he picks up just where he left off.

Now, since CREATURE was largely derived from a Mexican original (apparently lost) entitled LA MARCA DEL MUERTO, the way the film jumps illogically from scene to scene *may* be entirely due to the way Warren cut the film.  I don't imagine Warren did the original footage any good.  Nevertheless, some of the senselessness seems implicit in the original film.  In one of the few detailed online reviews of CREATURE, the site BRAIN EATER describes how young Malthus finds his way into the lab of old Malthus:

Wait a minute: that reminds me. The police! They arrested Malthus, and got him hanged for his crimes. But it seems they never discovered his lab! When Malthus, Jr. gets there, it's exactly as his grandfather left it, complete to the withered corpse strapped to the table. Either the police couldn't be bothered with removing the body, or collecting any of that pesky evidence; or else they arrested, convicted and executed him for something entirely different.

Similarly, the very ending of the film-- almost certainlty the work of original director Fernando Cortes-- culminates in the usual "burning laboratory" where Young Malthus fights Old Malthus to protect some babe from being bled to death.  With the babe in tow, Young Malthus escapes the burning lab, and to make sure the old creep buys it, he pulls the door closed after him.  Fair enough, you're thinking...

...Except that the inside door, which comes with a heavy bolt-latch, LOCKS ITSELF after Malthus has gone through it.  Brain Eater remarks that maybe the latch has been closed by the hand of God, and in truth one does see a couple of pointed visual highlights of crucifixes.  But I think a more likely expectation is that Cortes, like a lot of quickie directors, just thought it looked neat.

I've nothing much to say about this one.  I like Mexican horror movies of the period, but most of them are enjoyable for the way they put their cultural spin on the old horror-tropes of Universal Studios.  Warren may be mainly responsible for how dull and incoherent CREATURE is, but I suspect the original aided and abetted the crime.

I find myself wondering who came up with the name "Malthus" for the two doctors.  The best-known "Malthus" in history is the 18th-century English scholar who became famed for his population studies.  I can't see much connection between him and a horror-flick about living dead men, except that the bad guy gets rid of a lot of the "population."
Posted by Gene Phillips at 3:37 PM
Email ThisBlogThis!Share to TwitterShare to FacebookShare to Pinterest
Labels: the marvelous