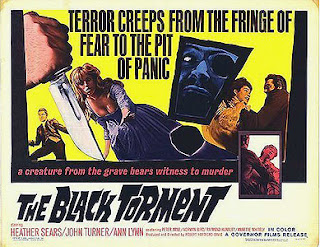 
I happened to watch this little-heralded Gothic-horror film a little after screening SCREAM OF FEAR, and I couldn't have imagined a better contrast.  Whereas the men behind the SCREAM became so preoccupied with plot-conundrums that they lost all sense of the characters as resonant symbolic presences, director Robert Hartford-Davis and writers Donald and Derek Ford put forth a "phantasmal figuration" that allows the viewer to run with the spooky fantasy.


In 17th-century England, middle-aged Sir Richard Fordyke returns to the family castle, which is still the property of his father Sir Giles, a man so infirm that he must be carted around in a wheelchair.  Until recently Richard has been a widower, for his first wife committed suicide due to gossip about her inability to bear children.  Now Richard brings a new wife, Rebecca-- oops, I mean "Elizabeth"-- who will take over as mistress of the estate and banish all memories of the unfortunate first wife.

Yet as soon as he arrives, Richard hears odd rumors.  The lower classes are concerned about the recent murder of a young girl (in fact, the film opens with the buxom Hammer-esque beauty being strangled by a hard-to-see male assailant).  Some of them think that they've seen Richard himself in the area in advance of his return, and suspect him of taking lethal liberties with the local ladies.  Richard treats the rumors scornfully; has he not been witnessed in London for the past three months, where he met and married Elizabeth? None of his faithful retainers can explain the anomaly, least of all Diane, the sister of Richard's first wife, who now cares for the invalid Giles-- perhaps to avoid being turned out, though this isn't expressly stated.

Soon Richard begins to receive more evidence that the ghost of his first wife Anna may be haunting him, and more murders take place.  Hartford-Davis keeps the Gothic atmosphere intense and suggestive, so that even though the viewer may suspect a mundane explanation for the mysteries, the eerie world seems like one in which a ghost might return, or where Richard might have some sort of menacing doppelganger bent on giving him an evil reputation.  Meanwhile, all these sinister goings-on don't lend themselves to Elizabeth's smooth transition as mistress, giving her the full REBECCA-style treatment.

At the conclusion one learns that it's all merely a plot by Diane and one of the retainers, aimed at unhinging poor Richard.  The idea of haunting him with Anna's spirit-- merely Diane in disguise-- is traditional enough, though I found myself puzzled at the "doppelganger" idea.  Richard, though not unlikable, isn't a particularly deep character for an English lord.  He doesn't seem the type to be mentally unbalanced by rumors of a murderous doppelganger, and the murders of the locals-- as well as Sir Giles-- don't seem to accomplish much in the villains' involved scheme.

Still, the script's psychological touches make the well-traveled road pleasurable.  Given the influence of JANE EYRE upon duMaurier's REBECCA, the Fords' script could be said to be faithful to that influence in that the "doppelganger" proves to be a variation on Bronte's famous trope of "the madwoman in the attic"-- only this time, it's Richard's deformed, insane brother who has been enlisted to perform the heavy killings.  In addition, after Diane takes a fatal wound in the hectic conclusion, she confesses that she like her sister was in love with Richard and resented his taking another wife.  Thus in a figurative sense Diane really is "Anna" reborn, even to the similarity of their names.


Posted by Gene Phillips at 3:44 PM
Email ThisBlogThis!Share to TwitterShare to FacebookShare to Pinterest
Labels: freakish flesh (u), phantasmal figurations (u), the uncanny