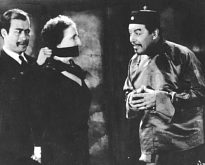 This Paramount film, the first sound adaptation of Sax Rohmer's famous Chinese arch-fiend, transforms the "devil-doctor" into a rather pedestrian serial murderer.  The film was directed by Rowland V. ("SON OF FRANKENSTEIN") Lee, who also directed the sequel, and co-written by Lloyd Corrigan, who had writing credits on all three of Paramount's Fu-related films.  Perhaps one should blame them for the transformation, in which this version of Fu seems closer in spirit to a production like Lon Chaney's 1927 MR. WU than with the Rohmer creation.

There are, to be sure, some touches indicating that the writers did research the Rohmer books.  The names of Fu's perennial opponents Nayland Smith and Doctor Petrie are used, though the new characters have very different histories from their prose versions.  One of policeman Nayland Smith's subordinates sports the name "Weymouth," who was a recurring cop-character in the early books.  At one point Nayland Smith even addresses the villain as "the insidious Doctor Fu Manchu," which was the American title of the first Rohmer Fu-novel.

But it's plain that the filmmakers wanted no part of Rohmer's "yellow peril" mad scientist, even though they couldn't avoid the central theme of racial conflict implied by the figure of Fu Manchu.  As an interesting touch, the movie's Nayland Smith consults at one point with the Chinese legation, whose representative expresses that Fu Manchu is no fit representative of the Chinese people.  It's possible that Lee and Corrigan meant to scale down the mythic nature of their Fu's evil, so that he would no longer seem to be a "yellow peril."

The only facet that the prose villain and this one have in common is that both of them evolve from the violence of the Boxer Rebellions, during which Chinese "secret societies" attempted to throw off the yoke of European influence in China.  In the first novel, Fu Manchu is an exceptionally gifted member of one such society.

In MYSTERIOUS, this Fu Manchu (Warner Oland) is a gifted Chinese doctor who believes that the white people in his land are essentially beneficial.  However, when some Boxers take refuge in his house, the British army blast away at them, incidentally killing Fu's wife and son.  In Oland's only good acting-moment, Fu is catastrophically traumatized by his loss, and he plans to avenge himself on the Englishmen who took part in his tragedy.

As it happens, one of Fu's white colleagues leaves his little daughter in Fu's care prior to the man's death.  Though civilized Fu initially treats little Lia as a daughter, vengeful Fu sees her as the emblem of the accursed white race.  Though Lia (Jean Arthur) grows to adulthood as Fu's ward, believing her foster-father to be entirely saintlike, Fu plans to use her to help him kill his targets.

He does so with his only metaphenomenal talent, for this Fu, somewhat like the prose version, is a master of hypnotism.  The film jumps in time between Lia's childhood and Lia's adulthood, during which time Fu manages to slay most of the British soldiers who wronged him.  Presumably he uses Lia as some kind of mesmerized stalking-horse, possibly setting the victims up to be poisoned, since Nayland Smith comments that this is the killer's dominant method.  Certainly this seems to be Lia's function when she encounters Fu's last two targets, General Petrie and his son Jack.  Of the two only the older man actually participated in the Boxer Wars, but Fu has sworn to end the family lines of all who injured him.

It should be no great surprise when young Lia falls in love with one of her intended targets, young Jack Petrie (Neil Hamilton, later of BATMAN teleseries fame). Jack happens to be a medical doctor like the "Doctor Petrie" of the novels, though Jack Petrie's profession doesn't have any impact on the narrative.  Fortunately for the Petrie family, Inspector Nayland Smith has been investigating the murders, though he doesn't initially know that the respected doctor Fu Manchu is behind the killings.  However, he ferrets out Fu in jig-time.  The Petries are saved and Fu chooses to drink his own poison to evade Western justice.

Lee's direction, allegedly done for both silent and sound versions, has a stagey look, though at times the action is allowed to ramp up slightly.  Dialogue has a crisp sound to it, but Fu is the only individual who gets any meaningful characterization; the rest are just simple ciphers.  The plot gives Lia a few opportunities to agonize at having been betrayed by her father-figure, but Jean Arthur's performance is over-ripe, just as Oland's Fu is a little on the bland side.  There's the usual bad comedy relief for the period, of course.  A minor character, a female Chinese servant who helped Fu raise Lia, proves that not all Chinese are bad in that the servant distracts Fu at a crucial time, allowing Lia to avoid poisoning her lover.

As mentioned I think it's possible that Lee and Corrigan sought to make Fu more human, a victim of real tragedy-- although none of the characters seems to feel any of his pain, with the inspector reducing him to "criminal insanity."  However, this Fu is largely a stock Chinese character for the period who is never more than the sum of his parts.  His personal tragedy in no way reflects on the justice or injustice of British imperialism; it's just a method to motivate the murders.  In one sense, though I'm aware that a fictional figure like the prose Fu Manchu could be used as a boogeyman by conservative interests, the idea of a Chinese supergenius, even if evil, casts a far longer shadow than this simple melodramatic construction.

This Fu uses none of the outre weaponry of his prose original, and only utilizes hypnotism on his faux-daughter.  If this element were not present, I might consider MYSTERIOUS just as naturalistic in its phenomenality as the aforementioned MISTER WU.

And though I deem most Fu Manchu films, like the books, to fall within the mythic category of "adventure," the attempt to scale Fu down to a pathetic serial murderer allies this film more with the mythos of drama.  I have not yet screened the sequel, but tend to believe from descriptions that it too falls into the same category.


Posted by Gene Phillips at 3:39 PM
Email ThisBlogThis!Share to TwitterShare to FacebookShare to Pinterest
Labels: enthralling hypnotism and illusionism (u), the uncanny