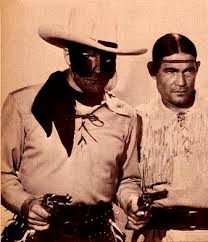 
Five years after the premiere of THE LONE RANGER on radio, the character-- whose backstory had remained vague up to then-- was given an "origin story" that became the accepted mythology for both the Ranger and his Indian friend Tonto.  Ironically, though the owner of the franchise George Trendle disliked various aspects of the Republic serial's script, he imported the "last surviving Texas Ranger" origin into later iterations of the hero's adventures.  Allegedly this is also the first time those adventures used the "William Tell Overture" that became inextricably tied to the character.

The story evolved from five credited writers and was directed by the reigning kings of the sound serials, William Witney and John English.  Perhaps their interest in regular western films caused the creators to plot the RANGER serial a little more tightly than most.  Many serials tend to unfold all of their basic characters and setups in the first two episodes and began to fall into a repetitious pattern in which the villain keeps pursuing some goal and the hero keeps stopping him, but doesn't catch the evildoers until the final episode.

RANGER starts with a basic idea seen in many films: having the villain, here one "Captain Smith," usurp the position of a legally constituted authority-figure in order to hide his evil deeds.  Captain Smith, along with a coterie of bandits, kills a man named Jeffries, appointed to administer tax collection in Texas, and assumes Jeffries' identity.  When he fears that a contingent of Texas Rangers may interfere with his control of the local constabulary, Smith/Jeffries has his men gun them down from hiding.  One ranger survives, thanks to the ministrations of Tonto (Chief Thundercloud).

The Lone Ranger opposes the villain's taxation and stirs up other locals to oppose him as well.  Smith hopes to break the rebellion by uncovering the Ranger's identity, but it happens there are five guys in town with the build of the Ranger, all of whom are resisters.  This subplot had been used in earlier serials, in which the audience was encouraged to guess which candidate was the real Ranger.  This is one of the less worthwhile devices of the serial, partly because all of the candidates are just cookie-cutter goodguys, partly because the serial concludes by actually showing the audience the face of the real Lone Ranger.  And you know you don't pull the mask off that ol' Lone Ranger.

Still, though there are the usual breathless cliffhanger escapes here, some non-villainous characters do get killed for real, and the script gives their deaths more gravity than one usually sees in serials.  A notable death is that of the blacksmith who makes the Ranger's silver bullets, who's rather easily tracked down by Smith's owlhoots-- thus suggesting that the "silver bullet" gimmick is one that doesn't work too well if the hero's operations are confined to one locale.

This Ranger (played by Lee Powell) is no namby-pamby milksop.  In one scene, he rescues Tonto from Smith's men when Tonto's about to be whipped.  While Tonto keeps a gun on the goons, the Ranger challenges the leader to a fight and wipes up the desert with the thug.  Later, Smith/Jeffries gets the brilliant idea to marry heroine Joan to keep her from testifying against him.  The Ranger and Tonto interrupt the nuptials, after which the hero slashes the outlaw-boss with a whip, warning him not to try forced marriage again.  Needless to say, no wedding-bells are heard in future installments.

The sociological issues in this serial are necessarily broad, but the partnership of the white lawman and the faithful Indian companion seems portrayed as an alliance of equals here.  As with Zorro, there's some enjoyment to be had from seeing the hero defy the minions of the law, even when the law has been taken over by ilicit impostors.
Posted by Gene Phillips at 3:31 PM
Email ThisBlogThis!Share to TwitterShare to FacebookShare to Pinterest
Labels: combative adventures, outre outfits (u), the uncanny