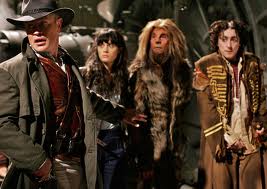 
I'm certainly glad I gave TIN MAN a pass the first time the mini-series premiered on the SYFY Channel.  Had I seen it before screening NEVERLAND, a mini-series on roughly the same theme and directed by the same director, the memory of TIN MAN's abject awfulness might have spoiled my enjoyment of Willing's later opus.

My review of NEVERLAND should make clear that I'm not a literalist with respect to adaptations.  I enjoyed NEVERLAND even though it rewrote the "Peter Pan" continuity of J. M. Barrie, and even professed a mild liking for Willing's 2009 mini-series, which turned ALICE'S ADVENTURES IN WONDERLAND into a simplistic "outsider saves the world" scenario.

Happily, there's an explanation as to why the later Willing directorial efforts come off better: he wrote ALICE and NEVERLAND, while TIN MAN is credited to a writer-producer team named Mitchell and Van Long.  I choose to blame these gentlemen for not just being free in their adaptation of L. Frank Baum's WONDERFUL WIZARD OF OZ, but for using the OZ concept as an excuse to make a thoroughly tedious take on STAR WARS.  Interestingly, I spotted the writers' indebtedness to the Lucas franchise before looking up the team's credits, which happened to include three episodes of STAR WARS: THE CLONE WARS about four years after TIN MAN.

Whereas Willing's scripts for ALICE and NEVERLAND show some awareness of the narrative myths underlying the original works of Carroll and Barrie, the Mitchell-Van Long script for TIN MAN pays only superficial attention to both the content of Baum's Oz books and the classic MGM film-adaptation.  One can understand any adaptor wanting to avoid close comparison with a work as iconic as the 1939 WIZARD OF OZ, but the duo's approach does so by descending into stock cliches and tired characterizations.

The viewpoint character here is a modern-day decendant of Dorothy Gale, "D.G." (Zooey Deschanel), but in the first section her real-world discontents take a decided back seat to the character of "Wyatt Cain," who approximates the Tin Man of the novels and movies.  In the typical Oz narrative all of Dorothy's male accomplices are damaged figures who take inspiration from her in order to act decisively.  Wyatt Cain has assorted issues dealing with the loss of his family at the hands of the evil sorceress Azkadellia-- but damaged and in need of inspiration he is not.  Cain is the standard "tough sheriff" of westerns, with his designation "tin man" referring to his former status as a policeman in "the O.Z." or "Outer Zone."  Though Cain is not very much like the characterization of Han Solo in STAR WARS, I  speculate that the producers drew on memories of STAR WARS and its space-opera transformation of western tropes in order to give their Oz-imitation a more standard figure of male efficacy.

The standins for "the Scarecrow" and "the Cowardly Lion" *are* allowed to be more in line with other versions. "Glitch/Scarecrow" must find a way to cope with his scattered brains (removed from his skull by the sorceress) and "Raw/Lion" must find his courage, etc.  But both proved flat characters lacking in the humor seen in the 1939 film, so their efforts aroused in me little identification.

As the charmless foursome continue their peregrinations throughout the O.Z., D.G.'s story-arc is given more emphasis.  She learns that the parents who raised her on Earth were androids, who are technically called "homos," thus leading to screamingly stupid lines like, "How do you find a homo?"  D.G.'s real parents are the King and Queen of Oz, both held in prison by the adolescent Azkadelllia-- who happens to be D.G.'s sister.  However, Azkadellia's tyrannies are not entirely her fault.  When the two girls were very young, they trespassed on a cave where the spirit of a witch-- implicitly the Wicked Witch of the West-- attacks them.  D.G. flees, making it possible for Azkadellia to be possessed by the witch's spirit.

Three years later, Tim Burton would also craft a version of ALICE in which two female rulers in Oz were at odds as a result of sibling rivalry.  However, Burton's version allows for some adroit characterizational moments, while the conflict between D.G. and Azkadellia never goes beyond the level of reciting necessary plot-points.  Moreover, Azkadellia's plot to dominate the O.Z. with a device called a "Sun-Seeder" lacks any mythic resonance, standing in for a threat comparable to the "Death Star" of the original STAR WARS.

Generally the performers acquit themselves adequately despite the lumpish dialogue and too many scenes that amount to filling in time for a long, three-part narrative.  But none of the performances are worth suffering through the tin-eared dialogue of TIN MAN.

Posted by Gene Phillips at 3:27 PM
Email ThisBlogThis!Share to TwitterShare to FacebookShare to Pinterest
Labels: combative dramas, the marvelous