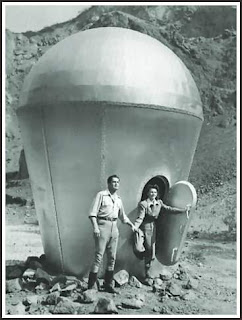 
I bracketed these two serials together because (1) both stem from the years that producer Sam Katzman helmed Columbia's serial production, (2) both are adaptations from other media, and (3) both are what I call "running around, fighting, getting nowhere fast" serials.

Although most serials of the sound era had considerable budgetary limitations, most of those produced under Katzman don't really try to conceal said limitations. Where a serial like 1937's DICK TRACY gives viewers the impression of seeing the hero jaunting around to many locales in search of crimes to stop, many of Katzman's serials seem to keep the principals confined to one or two locales. Thus. no matter how much fighting and running around the heroes and their opponents may perform, a sense of inertia, of not getting anywhere, inevitably sets in.

The BRICK BRADFORD comic strip began in 1933, focusing at first on aviation adventures, and then putting increasing emphasis on fantasy-exploits like those of 1929's smash success BUCK ROGERS. (The appearance of 1934's FLASH GORDON may have had some effect as well.) In 1935 the heroic Brick began having adventures in other temporal eras thanks to his "Time Top" (seen above), and in his few later incarnations he's probably best known as a time-traveler.

The 1947 serial, however, doesn't have a consistent idea of what it wants to do with Brick, and it's been said that each of the three credited writers did separate parts of the continuity without much reference to one another. Brick, like many serial-heroes, finds himself trying to prevent a radical new weapon (another death-ray) from falling into the hands of evildoers, this time both Earthly spies and agents of a civilization on the Moon-- technically not "aliens," since it's briefly established that the humans there emigrated from Earth long ago, under vague circumstances.

For me, the section dealing with the Moon-action was the most enjoyable. Despite being a dimestore version of the FLASH GORDON serial, there's at least some attention to the exotic appeal of FLASH in some of the Moon's weird decor, in the glowing "Crystal Door" that transports the Earthmen to the lunar surface (where of course they can breathe quite easily), and in the nasty queen of the Moon, Khana (Carol Forman). There's even a little Dale-Aura conflict as Khana sets her sights on handsome Brick (Kane Richmond), much to the displeasure of the standard Earth-scientist's daughter June (Linda Leighton).

Aside from these sequences, the rest of the serial is just a lot of incomprehensible running around and fighting, whether it takes place in modern times or in another era, thanks to the Time Top. There are occasional moments of humor, but not an intolerable comedy relief this time, and the conclusion actually emphasizes a romantic moment between Brick and June. 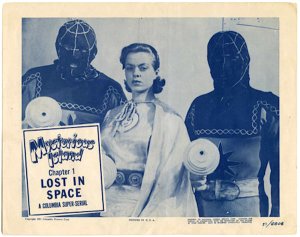 I have not read Jules Verne's MYSTERIOUS ISLAND, but from all accounts it's barely a metaphenomenal book at all. Several castaways become stranded on an island and must deal with issues of survival, though they get help from a mystery benefactor who turns out to be none other than Captain Nemo, who alone survived the wreck of the Nautilus in 20,000 LEAGUES, along with his fantastic submarine.

The first episode of 1951's MYSTERIOUS ISLAND is allegedly true to the book, which takes place during America's Civil War. The aforementioned castaways, all Northern officers or sympathizers, escape captivity in the South by stealing an observation balloon, but become stranded on an island. The main hero Captain Harding (Richard Crane) is given a touch more humanity at the outset than most serial-heroes, though it doesn't help once the action starts, for said action once again consists of-- lots of fighting and running around, this time in a locale which cannot be varied. As if to make up for this static situation, the scriptwriters have the five castaways menaced by no less than three separate menaces. The most mundane menace is a gang of 19th-century pirates, and technically the island's inhabitants are mundane in that they belong to some island-dwelling Earth-tribe, though the serial dresses them up in outer-space-looking garments. In contrast, the last menace-- actual aliens from the planet Mercury-- are rather mundanely outfitted, as the above photo shows. The Mercurian leader, one Rulu, is acceptably "alien" in her attire, but her minions are dressed in knockoffs derived from the look of Columbia's SPIDER'S WEB serial, right down to that hero's spider-webbed mask. I note in passing the accidental resemblance of the serial's first chapter to the title of a 1965 teleseries, but there's no truth in ISLAND's advertising. No one goes into space in the course of the serial, though we do see the Mercurian ship-- which is just a refurbished BRICK BRADFORD "time top"-- land on the island. 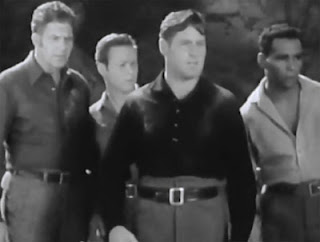 The various motivations of the three separate menaces are dodgy at best, while the castaways have no motivation beyond immediate survival. The fistfights are pretty good, and though Rulu is no Khana, she at least has a few magisterial moments, conquering the will of her opponents with a thought-control wand. Of Harding's four companions, the three white guys are largely interchangeable. The one black character, Ned (Bernie Hamilton), doesn't get a lot of characterization, but in contrast to the roles given black people in most serials, he's treated respectfully and is shown to be a handy guy in a fight. Given that Verne did a horrible "idiot Negro" in ROBUR THE CONQUEROR, I suspect that this may be one thing that this goofy serial improved upon-- though I'm in no hurry to read the book and find out.

Posted by Gene Phillips at 3:43 PM
Email ThisBlogThis!Share to TwitterShare to FacebookShare to Pinterest
Labels: combative adventures, the marvelous