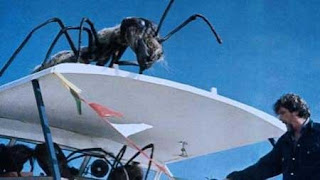 
I've not read the original H.G. Wells "Empire of the Ants" short story from 1905, but an online summary informs that (1) the titular ants don't get their super-intelligence from radiation or any other marvelous factors, and (2) neither the setting nor the characters of the original story appear in the movie.

For what little it's worth, the 1977 movie is the last "big bug" flick from writer-director Bert I. Gordon, who garnered a measure of fame for cheesy films like BEGINNING OF THE END. The special FX in EMPIRE are at most marginally better than those in the 1957 film, but the basic plot is roughly the same-- not too surprising, since Gordon co-wrote the script. Once again, humankind's careless use of radioactive materials-- in this case, wastes dumped into the environment-- causes ordinary-sized insects to mutate to king-size status in a matter of days.

As long as one doesn't expect much of the film's weak cosmological theme, there's a little fun to be had in watching ants hunt down a collection of baffled humans in the Florida Everglades. The expedition is made up of a group of potential land-buyers being given the grand tour by real estate schlepper Marilyn (Joan Collins before her pre-DYNASTY comeback), and there's a little symbolic potential that most of the characters are motivated by the great American Dream of making money, when they're forced to fight for their lives. But the characters are largely ciphers with stereotypical problems and situations, though the cast boasts several solid presences, including Robert Lansing, Albert Salmi, and Pamela Susan Shoop (who gets the best lines, at least within the script's mediocre capacity). There's also some potential in the idea that the "queen ant" magically evolves the ability to turn human beings into drones with her pheromones, but this too is not used to best effect.

Though I can imagine EMPIRE being watched with a "so bad it's good" mentality, I don't think it's all that rewarding on that level. Cinematographer Reginald Morris composes some really good shots to make the most of the Florida locale, which is more visual oomph than one usually gets in a Bert Gordon film.

Posted by Gene Phillips at 12:06 PM
Email ThisBlogThis!Share to TwitterShare to FacebookShare to Pinterest
Labels: the marvelous