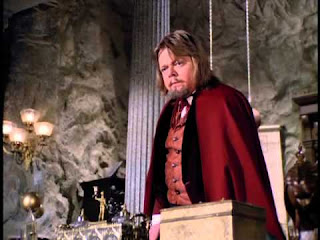 
TV-series reunions almost never turn out better than mediocre, and the two WILD WILD WEST telefims run true to form. The original show was a fast-paced, thoroughly pulpy transposition of James Bond's superspy tropes into the "wild west" of the 1870s. Two agents of the American Secret Service, tough James West and sneaky Artemis Gordon, fought various threats to the U.S. government, many of whom possessed weird weapons beyond the technology of that time-period. The foremost of the two agents' foes was pint-sized genius Doctor Loveless, played with great elan by "little person" actor Michael Dunn.

The first telefilm is marginally better than the second in that it plays to fans' history with the series. Since Michael Dunn had passed on, West and Gordon-- retired from the Service but brought back for "one last job"-- learn that the original Loveless has died but left behind two adult children, Miguelito Jr. (the short-but-not-that-short Paul Williams) and Carmelita (Jo Ann Harris). Miguelito has inherited his daddy's talent for producing weapons far beyond the science of the time, but there's no great imagination here: the writers simply have him invent the atomic bomb fifty years early. (Even a coda at the end of the movie comments on how ridiculous this is.) On the positive side, the script does give actors Conrad and Martin some clever lines about how much they've aged, and how hard it is to keep the pulp-action going, whether it consists of romancing young ladies or trashing cyborgs. Mime artists Shields and Yarnell play the cyborgs: Loveless calls the male one his "six hundred dollar man." 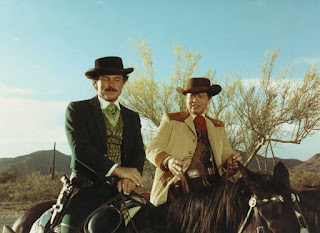 Though REVISITED only satisfies low expectations, it does that better than the single sequel, MORE WILD WILD WEST. One might have thought that it would be as good as the first one, given that it must've been put together by the same contingent of producers. Instead, MORE is a talky bore, in which West and Gordon are drafted once more to thwart the designs of another mad scientist, played clownishly by Jonathan Winters. Only one actor in this bore acquits himself well: Victor Buono, who played an arch-villain on the series, does an amusing imitation of Henry Kissinger, given the unsubtle name of "Doctor Messenger."

One other item of interest: in REVISITED, West gets embarrassed when he thinks a much younger woman is coming on to him, only to find out that she's the grown daughter of an old flame, who thinks of him as an uncle. However, all such limitations of old age are forgotten in MORE, when West has to seduce a much younger woman-- one of two twins-- to get information from her, and the film ends with both agents getting a twin apiece-- who are, of course, virtually interchangeable, like the plot of this telefilm with that of other reunion-pieces.

Posted by Gene Phillips at 2:45 PM
Email ThisBlogThis!Share to TwitterShare to FacebookShare to Pinterest
Labels: combative adventures, the marvelous