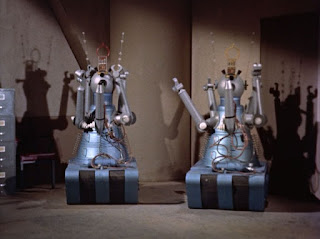 
To the extent that Ivan Tors is remembered outside the circles of metaphenomenal film-fans, the writer-producer is probably best remembered for his work on family-friendly animal-shows like FLIPPER and DAKTARI. Fans of 1950s SF-films, though, may have more regard for his three films known as the "Office of Scientific Investigation" series. The series was united more by a concept than any regular characters: in each one, agents of the "OSI" became involved in investigating mysteries or problems relating to America's scientific sphere of activities.

An interview with director Herbert L. Strock, included in this Tom Weaver book, throws substantial light on both the virtues and failings of the final film in the series, GOG. Strock, originally a film editor, found himself promoted to directorial duties on GOG, and expressed his opinion that Tors was the sort of creator who regularly read SCIENTIFIC AMERICAN and routinely tried to incorporate as much "techie" stuff in his 1950s trilogy as possible.

I have not seen the other two "OSI films," THE MAGNETIC MONSTER and RIDERS TO THE STARS, in some time, but GOG alone demonstrates Tors' penchant for structuring his stories so as to provide huge infodumps about fascinating scientific developments. GOG is probably the most jam-packed of the three, in that almost all of the action takes place within one American government facility, wherein a wide number of experiments are being performed, though all are related to a "space station" project.

GOG is constructed after the fashion of mysteries like Agatha Christie's TEN LITTLE INDIANS, in that the film starts with one of the researchers suffering a mysterious death. OSI agent David Sheppard (Richard Egan) is called in to investigate, posing as a scientist assigned to the project. He receives aid from another agent, Joanna Merritt (Constance Dowling), who's already serving as a covert contact with the facility, and who brings Sheppard up to speed about the various personalities involved-- not least a super-computer named NOVAC, very likely a cinematic tip of the hat to the famous mainframe computer of 1951, UNIVAC.

For most of the film, Sheppard and Merritt-- who are also a low-key romantic couple-- don't have much luck in preventing other scientists from suffering accidents (fatal and otherwise). All of the incidents involve malfunctioning equipment, and since all of the equipment is controlled by NOVAC, the script by Tors and Tom Taggart seems to be edging toward "Colossus" territory. Sadly, while this would have been a much more satisfying conclusion than the actual one, NOVAC is being controlled by another party, one that the audience never gets to see captured or incapacitated. It's a little like watching a "mystery killer" film in which you're informed that the killer was caught by the cops in some offscreen altercation.

However, the force behind the accidents does have two proxies that are more or less the stars of the show: the twin robots Gog and Magog. Designed as functioning "waldos" used to manipulate hazardous materials, the robots become violent and threaten everyone in the facility. Strock does an outstanding job of jazzing up the thrills at the film's end, considering that GOG was very much a limited-budget project. In fact, though Sheppard isn't exactly an action-hero, he distinguishes himself at the conclusion by wielding a flame-thrower at the robots (probably the most overt attempt to sell the film's 3D effects).

None of the characters are memorable, but to the script's credit, it does catch some of the pure fascination of science, and to that end the characters serve as adequate vessels of that "sense of wonder." It's interesting that the robots are named for two rebellious figures from Biblical lore, and that would have been more than a little appropriate had Tors decided to go the "Colossus" route. Even without an insidious super-computer, though, GOG is interesting in that it's a pro-science film that nevertheless takes all of its narrative strength from showing new scientific ways to kill people.
Posted by Gene Phillips at 2:40 PM
Email ThisBlogThis!Share to TwitterShare to FacebookShare to Pinterest
Labels: combative dramas, the marvelous