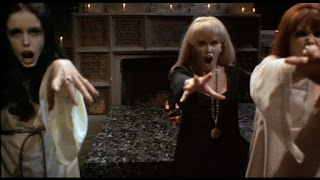 Such a competition is at least suggested in Stoker’s classic novel, in terms of two boon female friends, upper-class Lucy and lower-class Mina. Lucy, if not actually more sexually active than Mina, gives the impression of being more forthright, enough so that she has three suitors to Mina’s sole fiancée. Lucy is the first one Dracula vampirizes, but once he’s had her, he seems to leave her to her fate without much attention. In contrast, Mina is—thanks in part to her protection of the vampire-hunters—a “hard get.” She is vampirized, but resists the Count’s influence until he is destroyed. Thus there is an intimation sense that she enjoys erotic primacy in Dracula’s eyes, though perhaps not as overtly as one sees in straightforward romantic versions like 1991’s BRAM STOKER’S DRACULA.

Writer-director Bob Kelljan’s two “Count Yorga” films are very much built around the idea of a vampire taking up harem-hunting in modern Los Angeles. Unfortunately, the first film, COUNT YORGA, VAMPIRE, is rather murky as to the vampire-lord’s motivations. He uses his knowledge of occult matters to become an adviser to a group of well-to-do citizens, which includes at least two females that Yorga wants to add to his seraglio. One member of the group is Errca, whom Yorga interrupts when she’s parking in the forest with her boyfriend. Though not a major character, she more or less fulfills the “Lucy” role, as her friends try to find the missing woman, with the help of a blood-specialist who just happens to believe in vampires. Another member of the group, Donna, is in essence the “Mina” of this roadshow Stoker-show, for she’s the one whom Yorga pursues for most of the narrative. In contrast, Yorga seems to pretty much forget about Erica once he’s ensconced her as one of his three vampire brides. In contrast to the three brides in Stoker’s novel, all three seem to be modern converts to vampirism. Erica is the only one named, a second is completely anonymous, and the third is revealed to be Donna’s unnamed mother, thought to have died of pernicious anemia. This may be the most intriguing psychological motif of Kelljan’s script, but he doesn’t do much with it. Did Yorga come across the mother, seduce her, and then decide that he liked the taste of her so much, he just had to go after the fruit of her loins? There might be a hint of a mother-daughter competition here, not unlike the one in SNOW WHITE AND THE HUNTSMAN. But Kelljan apparently didn’t know how to construct his psychodrama so as to give this motif the competitive edge that it has in Stoker’s novel. Interestingly, since Yorga is like Dracula more than a century old—Yorga’s the only one seen to turn to dust—both mother and daughter are equally “daughters” in his family romance.

Frankly, the competition angle of COUNT YORGA is the only thing that saves the film. Kelljan’s script and direction are both weak, and I suspect that the main thing that made the movie successful in its time was the novelty of placing an old-school vampire in the world of hip L.A. 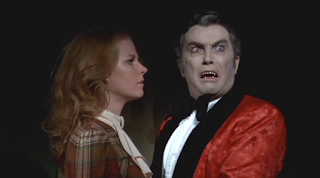 RETURN OF COUNT YORGA, though, is a huge improvement, though the competition-motif isn’t emphasized to the same extent.

The previous film ends with Yorga slain, though at least three of his vampire brides are alive. While it would have been easy to set up a scenario in which the brides pursued some course that would revive Yorga, Kelljan—this time, co-writing with Yvonne Wilder, who plays a deaf-mute character in the film—tosses aside continuity in favor of visual intensity.

Neither Donna, Yorga’s old erotic focus, nor any other character from COUNT is referenced here, though actor Roger Perry plays a new character in RETURN. Yorga’s new target is Cynthia (Mariette Hartley), who lives with her family in California and works at a children’s orphanage. Though later in the film we’ll learn that Cynthia is engaged to a young doctor, she seems strangely discontented as she stares fixedly into the sky and listens to the blowing of the notorious “Santa Ana” wind. After she talks a little with the priest who runs the orphanage, the camera cuts to the activities of one of a preteen orphan boy, playing out in the forest. He comes across three graves in the woods. For no obvious reason—though there’s a suggestion that the quixotic wind is exerting some supernatural effect—Yorga and two of his brides claw their way out of the ground. The boy becomes one of Yorga’s non-vampirized pawns, and although he’s not a major character, he’s the last character seen as the film closes:  suggesting the continued existence of evil masquerading as innocence.

Just as the wind seems to revive Yorga, it also seems to bring him tidings of Cynthia’s discontents. Certainly no other explanation is offered as to why, upon reviving, he somehow manages to purchase an estate neighboring the orphanage. In addition, he apparently does a  lot of recruiting, for by the time Cynthia does meet him—he attends a Halloween party at the orphanage—he’s got at least one non-vampire male henchman, whose sole purpose is to serve as “muscle,” and about five more vampire brides in addition to the two that un-buried themselves.

Like most vampiric targets, Cynthia is clearly fascinated with Yorga’s attentions, despite the fact that she’s engaged to a nice but dull modern fellow. The first film failed to speculate about Yorga’s reasons for pursuing Donna, but during the party, the vampire and his erotic prey have a fascinating tete-a-tete that suggests something about their subliminal relationship. Cynthia tells Yorga that she labors at the orphanage because she’s always sought some form of “purity” in life. Yorga, who naturally has no interest in such Christian values, reflects that he prefers “truth” over purity—though without mentioning that his truth is a literal perversion of the Christian ethos. Yet in a strange way Cynthia’s “purity” and Yorga’s “truth” seem to complement one another, though nowhere else in the film does the script wax philosophical in this manner.

The rest of the film from then on is a rousing thriller. Because Cynthia has a family who gives her support, the ruthless Yorga stages a home invasion, sending his harem to attack Cynthia’s house. The brides slay Cynthia’s mother, father, and sister. However, sister Ellen appears later as a vampire. Ellen, while not a major character, may be viewed as the “Lucy” of the story: she is a doublet of Cynthia, right down to having a dull fiancée, and her only major scene after being killed is to approach her fiancée and slay him. Perhaps Ellen is doing to her dull boyfriend what Cynthia might subconsciously like to do to her own.

Once the family is dead, Yorga uses his mental powers to obscure Cynthia's’a memory of the traumatizing event, and uses the family’s absence as an excuse to invite Cynthia to his estate. However, Yorga is anything but subtle, despite a few scenes in which he tries to seduce her through his charm alone. Thus Cynthia soon learns that she’s a prisoner in a mansion full of cackling vampires. The two male fiancées gain the aid of two reluctant cops and investigate the mansion, which leads to multiple blood-lettings. Despite having ample chances to vampirize Cynthia, Yorga does not do so, though he does put her under his mental thrall. At the conclusion, Cynthia rebels against her “demon lover,” after which her fiancée hurls him out the window. But like many early 1970s flicks, the evil of Yorga lives on, and the film ends with Cynthia about to get fanged, mirroring a comparable scene in COUNT.


RETURN is much more satisfying than COUNT. Whereas lead actor Robert Quarry seems somewhat affected in his role in the first film, in the second he epitomizes the courtly European par excellence. A rude woman, mistaking Yorga for a Halloween reveler, asks, “Where are your fangs,” and he responds, “Where are your manners?” In a pleasing scene that verges on burlesque, Yorga is seen at his manse, staring without expression at a Spanish-language broadcast of Hammer Films’ 1970 opus THE VAMPIRE LOVERS. These and similar moments suggest that Kelljan took a “catch as catch can” approach to vampire mythology. On one hand, it’s a given that Yorga cannot withstand the Christian cross, irrespective of whether the wielder believes in the faith or not. Yet, though the vampire brides are unharmed by the cops’ bullets, Yorga himself is wounded by a metal axe in the chest. Still, though Cynthia is a “Mina” who doesn’t have much of a “Lucy,” she does conform to the general pattern of the female who is fascinated with the unknown but fights to the bitter end to avoid being suborned by it. The fact that neither Donna nor Cynthia triumph as Mina does merely suggests that Bob Kelljan was not nearly as devoted to the theme of erotic primacy as was Bram Stoker.
Posted by Gene Phillips at 1:04 PM
Email ThisBlogThis!Share to TwitterShare to FacebookShare to Pinterest
Labels: the marvelous