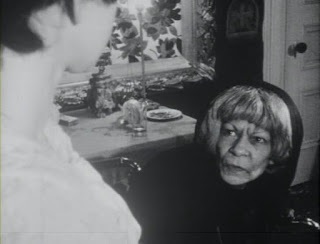 In my review of LEGACY OF BLOOD I said:

What little I remember of GHASTLY ONES is that even though it was just another predictable story of a mystery-killer knocking off members of a nasty family, at least the "sadism, incest, and murder" in that film was comparatively "good sleaze." In contrast, Monson has all the same ingredients, and does nothing diverting with them.

I''ve now reviewed my copies of two Andy Milligan films that came out within a year of each other, and I have the impression-- though certainly no evidence-- that Carl Monson, director of LEGACY, may have seen both Milligan films and borrowed elements from them for his film. Since both men worked in sexploitation films, it doesn't seem unlikely that Monson might have been acquainted with both works, though of course no one will ever know positively.

Further, I erred in calling GHASTLY ONES "good sleaze," though the film does have fans who would affirm this. I was actually thinking of SEEDS OF SIN, which was issued on a DVD with GHASTLY by the Something Weird people. Neither film is actually good in a formal sense, but whereas Monson is simply playing with a dysfunctional family as a means of putting butts in theater-seats, Milligan appears to have been obsessed with the theme as a result of his real-life experiences.

SEEDS OF SIN involves no inheritance-theme, and in place of a malevolent patriarch there's a corrupt matriarch, wheelchair-bound Claris Manning, who spawned a brood of children she hates. One daughter, Carol, stays with Claris and takes care of her, though the two of them ceaselessly spit bile at one another all day. One day Carol takes it into her head to invite all of her siblings to the Manning estate without her mother's permission, and since they're all on their way, Claris has no reasonable choice but to let them enter her house.

The various vices of the Manning children and their spouses are then put on display, but the only one that makes for passably good sleaze is the connection between sister Carol and her older brother Michael. The two of them had sex as teens, and Carol clearly wants to renew the forbidden relationship, despite the presence of Michael's wife Susan. The other members of the family are just as wacked-out and one-dimensional as Carol and Michael, but to provide narrative momentum, an unseen killer starts knocking off members of the family. (Both Milligan films use this trope but barely if at all bring in any authorities to investigate the murders.) The crimes are passably bizarre-- a beheading, acid thrown in a beautiful woman's face-- but the director's main passion is for the toxicity of the family, irredeemable in any way (which in terms of my schema makes SEEDS an irony). In keeping with the emphasis on family-as-hell, the killer is revealed to be a person entrusted with a caretaking function-- which is the one thing both MIlligan films and the Monson film have in common. 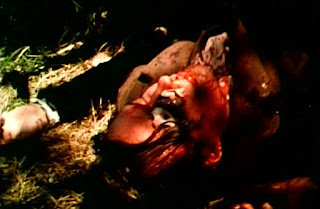 SEEDS is moderately better than GHASTLY ONES, partly thanks to distributor tampering. It seems someone thought that the film would play better in low-class theaters with more softcore sex scenes, and so many such scenes are inserted willy-nilly. They're not exceptional scenes, though they did employ body-doubles with better bodies than Milligan's cast. However, GHASTLY ONES has no such saving grace: in place of softcore sex-scenes, Milligan has relied more on horrific "money shots"-- and indeed, GHASTLY is said to be the film that started Milligan on the road to being a maker of horror-films.

This time, there is a definite inheritance-plot, in which three sisters and their spouses must live for a time on their late father's estate in order to satisfy the conditions of his will. In place of the stark black-and-white photography, GHASTLY is full of, well, ghastly, garish color shots, giving me the impression that Milligan had no idea how to compose shots in this medium. I found the film so hard to watch that I couldn't even make notes as to which siblings did what to whom. The murders by a hooded killer-- particularly one involving open-heart surgery-- are clumsy, though at least the killer has a different motive than the one in SEEDS, while still following the "demented caretaker" theme. I suppose Monson probably swiped the notion of the inheritance-conditions-- though this was old-hat even in the 1960s-- some of the gore, and keeping one character-name, "Veronica," the same, albeit for a different type of character.

This too is so full of the toxins of human vileness that I can only categorize it as an irony as well, in which nothing positive or life-affirming has any chance to survive.

Posted by Gene Phillips at 10:45 AM
Email ThisBlogThis!Share to TwitterShare to FacebookShare to Pinterest
Labels: bizarre crimes and crimefighting (u), perilous psychos (u), the uncanny