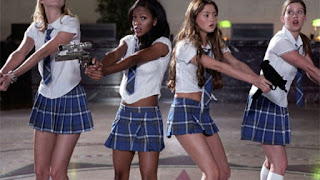 
I'll get the metaphenomenality question out the way first: the only thing that makes this film "marvelous" is that in one scene the soon-to-be-reformed villainess steps up to a big-ass, somewhat phallic cannon and claims that she's going to annihilate Australia. The gun is never activated, but her henchman seems to believe it will work. There's also a moment where some of the titular heroines are trapped in a chamber where a spiked ceiling is lowering itself down upon them, though technically this could fall into the "uncanny" phenomenality-- much like the outfits worn by the D.E.B.S., which look like faux "Catholic schoolgirl" uniforms.

I'm not sure why the DEBS (I got tired of typing the periods) bother with these outfits. Their alma mater is an American spy school where presumably everyone knows that they're not ordinary students. Of course the non-diegetic reason is that main character Amy (Sara Foster) and her three DEBS colleagues look really hot in their outfits, and not only to that evil "male gaze." DEBS (the movie) started out as an 11-minute short that toured various festivals, including at least one that focused on gay/lesbian film-making, and it is, despite its apparent similarity to spy spoofs, primarily a lesbian rom-com in which the spy-junk is incidental to the unison of Amy with her opposite number (and other main character), international arch-villain Lucy Diamond (Jordana Brewster).

Lucy is in truth not the villain of the story, even though she has the usual Blofeld-ian lair full of intricate devices and even though she's on a "most wanted" list for international criminals (the audience is led to believe that she's simply overcompensating for never having found True Love). While Lucy is a lesbian when the film starts, Amy has not yet realized her true erotic calling, though she's just broken up a hetero relationship-- making her, so to speak, ripe for conversion. Lucy and Amy have a "meet-cute" in spy-movie terms-- they confront each other with drawn guns-- but Lucy distracts the less polished DEBS agent with her charms and slips away. However, Lucy continues to court Amy, who is conflicted less by changing her gender-focus than by betraying the ideals of the DEBS agency by consorting with a criminal. Lucy promises to change her ways-- there's even a cartoonish scene in which Lucy gives back some of the money she's stolen from banks over the years-- and eventually the two hot girls hook up. One other DEBS member knows of their relationship, but the other two don't, making for a lot of comic-- though not particularly funny-- confusion.

So who's the villain of the story? Well, in a sense it's the DEBS agency, in that its members insist on obeying the law and bringing Lucy in for trial. rather than letting the two lovebirds fly away. The affair is revealed, but because the bosses of the agency don't want to be publicly embarrassed by Amy's fraternization (sororization?), they agree to sweep the incident under the rug. The other DEBS members are somewhat pissed at Amy for breaking her oath of office, and for hiding things from them. As part of the cover-up, Amy-- who is up for a "DEB of the Year" award-- must give a speech in which she tells of her harrowing captivity by Lucy Diamond. Lucy for her part is so desperate to see her lover that she infiltrates the ceremony. However, Amy can't denounce Lucy and publicly confesses their love affair to the audience. Lucy gets the only combat of the climax-- she gets to beat down her romantic rival Bobby-- and with the help of the other DEBS agents, Amy and Lucy escape, giving up both heroism and villainy for their love.

As mentioned earlier this is not a regular spy-spoof like SPY HARD:  the tropes of the superspy-genre could have been redone as cop/crook tropes with no real change in the plot or theme. DEBS is not even trying to be funny after the manner of other spoofs: its writer-director Angela Robinson was apparently more interested in projecting a droll attitude. She doesn't really have anything to say beyond the glorification of the film's amour fou, but I assigned this a "fair" rating because there's some sociological accuracy to portraying the superspy-fantasy as an excuse for erotic encounters. Also, silly though the film is, it does buck the tendency of commercial American films to validate the authority of government agencies. I feel like Robinson might have also said something about the social pressure that "girl-groups" exert on their members. but maybe that would be expecting too much from her.

Posted by Gene Phillips at 3:19 PM
Email ThisBlogThis!Share to TwitterShare to FacebookShare to Pinterest
Labels: combative comedies, the marvelous