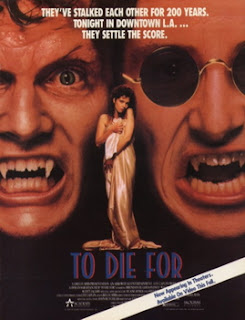 
I only rewatched these two low-budget vampire flicks because I remembered that both ended with vampire-on-vampire battles. Thus I wanted to know whether or not these fights qualified them for the mode of the combative. I satisfied myself that they do, though there wasn't much else of interest.

TO DIE FOR is definitely the better of the two films. Despite the budgetary limitations, director Deran Sarafian gives Lesley King's script a glossy erotic flair, as modern vampire Vlad Tepisch-- who is apparently yet another version of Dracula, without using the name-- seeks to set up new digs in the Hollywood Hills. To do this Vlad needs a real estate agent, and he just happens to meet a toothsome one in young Kate Wooten. Kate, like so many vampire-victims before her, just happens to be dissatisfied with her current boyfriend. Yet, though there's any immediate erotic charge between Kate and Vlad when they meet, Kate doesn't succumb right away, making her the "Mina" of the story. So Vlad seduces her friend, who becomes the ill-fated "Lucy." Vlad, as played by Brendan Hughes, manages to remain relatively sympathetic despite his acts, partly because his vampire brother Tom (Steve Bond) has followed Vlad and shows himself to be much worse. Tom (they couldn't have found a more Romanian name?) bears a grudge against Vlad, who vampirized Tom's former girlfriend. Now Tom is out to get revenge by killing or vamp-kissing Kate. It's pretty predictable but is helped somewhat by good visuals and strong acting from Hughes and Bond. 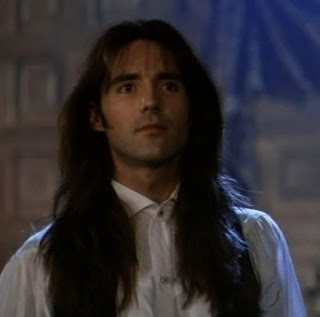 Not so the second incarnation. Despite being scripted by the same person, SON OF DARKNESS is unbearably tedious. It sets forth a premise with good potential. At some unspecified time, Vlad-- now played by a lackluster Michael Praed-- lay with and conceived a child by a mortal woman. By chance Vlad-- who somehow escapes his death from the first film and becomes a medical doctor at a bloodbank (har har)-- meets both the infant child and his adoptive mother. Tom survives his death too and does everything he can to make Vlad's life miserable-- except that the script does his job for him. Director David Price probably didn't have much to work with, as the script wanders about with no sense of dramatic development or backstory-- but the only decent part of the story is the final fight, which is at least livelier than the one from the first film.

Still, nothing much to recommend about either one, unless one just has a jones for vampire erotica.
Posted by Gene Phillips at 4:29 PM
Email ThisBlogThis!Share to TwitterShare to FacebookShare to Pinterest
Labels: combative dramas, the marvelous