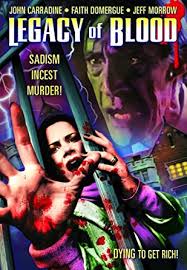 While the cover-copy of the above VHS package is technically accurate-- that one will find in the movie all the stars billed, as well as "sadism, incest, and murder"-- never before have such actors and themes been rendered with such tedium in one work of cinematic sludge.

A few sources assert that the plot by writer-director Carl Monson-- whose best work is probably 1973's schlocky sleaze-horror flick PLEASE DON'T EAT MY MOTHER-- cadged the story of LEGACY from Andy Milligan's 1968 THE GHASTLY ONES-- which Milligan turned around and remade in a film that may be just as boring as Monson's: LEGACY OF HORROR. What little I remember of GHASTLY ONES is that even though it was just another predictable story of a mystery-killer knocking off members of a nasty family, at least the "sadism, incest, and murder" in that film was comparatively "good sleaze." In contrast, Monson has all the same ingredients, and does nothing diverting with them.

Of course, the story was old before either Monson or Milligan were born: Hollywood had once churned out dozens of "old dark house" flicks in which a bunch of potential victims were forced to tolerate each other's company while some killer strove to assassinate the lot of them. LEGACY is probably duller than the worst of these, though, because the 1971 film promises a lot of ilicit titillation and doesn't deliver. Yes, there's a guy who likes to be beaten, and a vague interaction between a brother and sister that may have included incest-- but it's all delivered in a workmanlike manner by actors who were probably mortified by participating in the project: not least Jeff Morrow and Faith Domergue, who had enjoyed considerably better fortune when they were cast together in 1955's THIS ISLAND EARTH.  For the record, only Ms. Domergue manages to put across a halfway decent performance amidst the tedium, in contrast to the offensive mugging of Buck Kartalian. John Carradine only has a few scenes, but his ringing voice offers one of the film's few pleasures.

The various murders are poorly executed and always unconvincing, but there's not much doubt from the first that the motivation is pure gain, so there are no perilous psychos in LEGACY. For completists of Carradine and Domergue only.

Posted by Gene Phillips at 1:55 PM
Email ThisBlogThis!Share to TwitterShare to FacebookShare to Pinterest
Labels: bizarre crimes and crimefighting (u), the uncanny, weird families and societies (u)