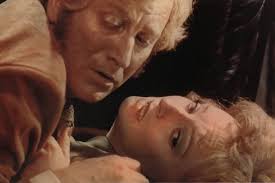 
I've never agreed with critics who find FRENZY to be a great Hitchcock film, any more than with writers who place it in their horror-movie guides simply because the film contains a serial killer.  By contrasting Hitchcock's approach to the serial killer in this and a genuinely uncanny film like PSYCHO,  I find that Hitchcock's approach with FRENZY has more in common with his 1943 film SHADOW OF A DOUBT.  In my earlier essay I asserted that the psycho-killer of SHADOW lacked any of the "strange or unworldly aspects" I find in Norman Bates, and the same is true of the "Necktie Killer" in FRENZY, even though he's compared to Jack the Ripper in the film's first ten minutes.

I haven't read the Arthur LaBern novel on which the film is based, but a summary suggests that in the original novel the killer's psycho-sexual nature is secondary to the series of unfortunate events by which his entirely innocent friend is accused and convicted of the murderer's crimes.  This suggests to me that Hitchcock's primary interest in the source novel was its depiction of the horrors of the justice system.  This was a theme Hitchcock had invoked to devastating effect in 1956's THE WRONG MAN, but FRENZY fails to reach that level of naturalistic horror, perhaps because one policeman in FRENZY continues to investigate the case even after the conviction.

In the 1972 film-- one of the few late Hitchcock films to return to the director's native England--  psycho-killer Robert Rusk kills for much the same reasons Norman Bates does: sex is a substitute for sexual satisfaction.  The film's script is textbook Freudian, seen in the Freudian term "pleasure principle," which is used by Inspector Oxford as he describes the tempestuous, almost childlike fury of the killer when he strangles his female victims with a necktie.  Once this assertion is made, the script loses all interest in delving any deeper into Rusk's history or his specific psychology.  Even his friendship with Richard Blaney, an ex-RAF pilot who has fallen on hard times, seems at best a superficial acquaintanceship.

By coincidence, their paths become more strongly intertwined when Rusk, under a false name, attempts to find new female victims by subscribing to a matrimonial service, one that happens to be operated by Blaney's ex-wife Brenda.  Brenda refuses to accept further dealings with Rusk because his brutality-- though not his penchant for murder-- has been reported to her.  Rusk responds by attempting to rape Brenda.  I say "attempt" because some summaries claim that he does rape her, though it looked to me like he failed to perform, and so resorted to murder in frustration.  This scene of near-rape and strangulation is the grossest spectacle in Hitchcock's long career of thriller-making, and may represent his response to the lifting of Hollywood censorship in the late 1960s.  But though the scene sustains a certain technical interest, as a whole it fails as a cinematic spectacle.

Blaney, the nominal protagonist, is not much more interesting than Rusk.  The script makes frequent references to Blaney's military service, and to his reduced circumstances, where he must labor as a barman to make ends meet.  As with many stories about servicemen re-entering civilian life, there's implicitly an irony between his scanty rewards for having defended his country, versus the way his ex-wife prospers by catering to the needs of lonely people.  Prior to Brenda's murder, the script only devotes a few lines to the cause of her divorce from Blaney, and Blaney's current girlfriend, a barmaid from one of his places of employment, is no better developed.  Of all the female characters in the film, the one who most seems like a believable character-- even though she reflects a 'type' seen in many Hitchcock films-- is Brenda's secretary Monica.  She is the reverse-image of Rusk in that she's implicitly a virginal old maid, as well as an officious snoop.  She causes harm in her own way, carelessly identifying Blaney as the killer of Brenda simply because she's taken a dislike to him earlier, a dislike which seems rooted in a man-hatred no less formidable than Rusk's gynophobia.

There are some intense scenes in the film, not least being Rusk's difficulties when he learns that the dead body of Brenda, which he's disposed of, conceals a clue to her killer, so that he must seek it out again to recover the evidence.  But even the best scenes of FRENZY seem to be parts that never cohere into a greater whole.

I've termed this film an "irony," though it's not as palpably dark as the three Hitchcock films named above.  SHADOW in particular portrays almost everyone as foolish or stupid, but in FRENZY the average people are merely preoccupied, not stupid.  Inspector Oxford is a likeable enough character, though he too is rather superficial.  His belated attempt to save Blaney from prison-- after having taken part in his arrest-- is praiseworthy, but his about-face seems contrived.  To be a drama, I would have to believe that one or more of the characters possesses the power to change his destiny, even if he failed in the attempt.  But most of the characters lack such ability, and Oxford, though he is an exception, feels akin to the sort of plot-contrivance that saves Jimmy Stewart from incarceration in WRONG MAN: a contrivance of dumb luck.
Posted by Gene Phillips at 5:02 PM
Email ThisBlogThis!Share to TwitterShare to FacebookShare to Pinterest
Labels: perilous psychos (n), the naturalistic