HILLBILLIES IN A HAUNTED HOUSE (1967) 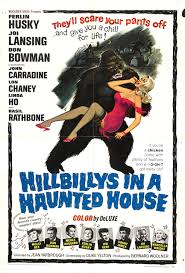 
Like MURDER BY DECREE, there's only a touch of the marvelous in this "phony ghost" story. It's far from being the first such film to toss a real spook into the mix, though HILLBILLIES may be the first I've reviewed here.

While you could probably get some sociological mileage out of exposing real hillbillies to hokey haunts, the title's inaccurate in that the film's three protagonists are all clean-cut Southerners. Two of them-- Woody (Ferlin Husky) and Boots (Joi Lansing)-- are country music performers, while the third, Jeepers, serves as both the musicians' manager and the movie's comedy relief. Like many sojourners before them, they're driving out in the wilds when they they need shelter, and the only place available is a deserted old plantation-house, complete with Confederate trappings and the legend of some sort of curse (though the protagonists aren't told about this).

The supposedly deserted mansion, however, plays host to four spies hanging around and waiting to get a secret formula sent to them. To emphasize the spies' indebtedness to Red China, the leader is Madame Wong (Linda Ho), while her subordinates are all played by actors from classic horror films (John Carradine, Basil Rathbone, and Lon Chaney Jr.) While  the spies aren't expected company in the deserted house, they've nevertheless brought all sorts of things to scare away the curious: floating sheets that are supposed to resemble ghosts, a werewolf mask, a pet gorilla and an iron maiden.

For most of the picture, the country guys and girl run around from these faux menaces, but an American agent intervenes to help them out a bit-- as does the ghost of a Confederate general whose family once occupied the house.  The comedy's far from funny, but there's some mild pleasure to be had from watching the old pros at work again, even in this oddball scenario. (When John Carradine gets crushed to death by the gorilla, it must've seemed like old Universal home week.) I paid no attention to the music, but Joi Lansing gave the dreary visuals some oomph.

Posted by Gene Phillips at 6:56 PM
Email ThisBlogThis!Share to TwitterShare to FacebookShare to Pinterest
Labels: astounding animals (u), phantasmal figurations (u), the uncanny