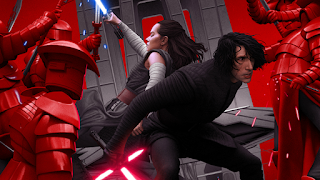 
It's been two years since the debut of THE LAST JEDI, writer-director Rian Johnson's follow-up to J.J. Abrams' refurbishing of the Lucasverse. I didn't get much out of the film when I saw its premiere, but its mediocrity didn't inflame me half as much as it did the more avid Lucas-ites. On re-viewing JEDI, it does occur to me that Johnson did manage to surpass Lucas in one regard-- i.e., the extent to which his script ignores the potential of the earlier segments.

With RETURN OF THE JEDI, Lucas blatantly contravened at least three and a half plot-threads from EMPIRE STRIKES BACK. First, he dismissed Yoda's veiled "there is another" prophecy and reworked it into a pointless reference to Princess "I-didn't-know-he-was-my-brother" Leia (though I suspect Abrams or one of his cohorts might've been thinking of the prophecy when Rei came into being). Second, Lucas ignored Muppet-Jedi's pronouncement that some dire fate would come of Luke's interrupted training. Third, Darth Vader's plans to unseat the Emperor in EMPIRE are just as forgotten. The one-half-a-thread relates to the plot dealing with Luke and Han being rivals for Leia, for, while EMPIRE doesn't entirely extirpate the rivalry-plot, it does slant things in Han's favor even without the missing-sibling revelation.

Johnson, though, beats all that by a country mile.

One noticeable change from the Abrams plot was Johnson tossing out Abrams' suggestions that oprhan-girl Rei was going to turn out to have some special heritage, and deciding that she was going to be a no one from nowhere. This non-revelation takes place during her interaction with hermit Luke Skywalker, whom Rei finds at the end of FORCE AWAKENS. Now, as it happens, Luke represents the only Abrams-plot that Johnson follows to any degree, inasmuch as AWAKENS spent almost half its running time having various good and bad people try to find Skywalker. Still, Johnson's continuity doesn't build on any of the potential for an interesting mentor-student relationship between Rei and Luke, and this stems from his near-total inattention to the character of Kylo Ren.

AWAKENS is not much better about describing the backstory of Kylo. Early in the film we know that he idolizes the legend of Darth Vader for some reason, which more or less leads into the big surprise that Kylo's the son of Han and Leia. He also became an apprentice Jedi to Skywalker at some point, but the two of them fell out, thus resulting in Luke's retreat from mortal affairs. Perhaps Abrams left things vague in case his successor wanted to flesh things out his own way. But whatever the shortcomings of Abrams's script, there's nothing in it that would've prevented a successor from working out the backstory that involved Kylo, his parents and his uncle-cum-instructor. But Johnson takes the easy way out. We never learn why Han and Leia were parted at the time of AWAKENS, or how that affected Kylo (who seems to hate both parents equally, rather than sympathizing with one over the other as would be more expected). We don't know what precipitated the decision of one or both parents to have Luke train his nephew, how early the training began, how Luke and Kylo got along during the mentorship. Johnson hangs the whole backstory on one peg: that Sith Leader Snoke, doing his best impression of Emperor Palpatine, sent evil dreams to Luke and thus caused him to be tempted into slaying his nephew. Of course, it's not a very good impression, since even Palpatine had to work with Anakin's existing psychology, his lack of a father and obsession with his mother, etc. Snoke doesn't need any of that; he just sends false dreams to Luke Skywalker-- the guy who resisted all the blandishments of the original Emperor-- and Luke folds like a card-table.

But as bad as Johnson's script is for Skywalker and Rei, at least actors Hamill and Ridley are able to play their senseless parts with some degree of gusto. No one else in the film gets that lucky. The bulk of the film is devoted to the First Order's stultifying pursuit of the fragmented Rebel Alliance, technically led by General Leia, though she's sidelined by an early injury so that she barely interacts with the rest of the cast. The manner by which Leia escapes death aroused the incredulity of many fans, but though it's a stupid scene, it's nowhere near as tedious as all of the action involving the newer cast-members.

Since Finn got so much attention in AWAKENS, one might've imagined that Johnson would attempt to develop the former Stormtrooper's own arc, apart from his friendly bonding with Rei. The only reference to Finn's meager backstory is that he does get to contend with his old commander General Plasma, but the significance of this is lost in a goofy and disorganized story that teams Finn up with another new character. This is Rose Tiko, who's defined entirely by her loss of her sister in battle and by her former status as a slave/serf somewhere. Finn and Rose get more sheer action than Rei and Luke do, but their heroic task is idiotic in the extreme. Having learned that the First Order can track the rebel fleet even through hyperspace, Finn and Rose go looking for a codebreaker who can mess up the Order's tracking-system without the villains ever knowing about it. Not only is the task underwhelming, the heroes only appear to succeed, so that the whole plot-thread comes off as a big waste of time. The actors aren't able to do anything to breathe life into this corpse of a plot, except sit back and let the expensive FX engross the audience.

Indeed, the whole "flight of the Alliance" storyline, which is supposed to reflect the dogged courage of the rebels comes down to the director spinning some very expensive wheels rather than constructing a solid plot. To drag this travesty out further, Poe Dameron-- barely known to the audience any more than Rose Tiko-- is defined here as "Han Solo writ small." Hotshot pilot Poe butts heads with Holdo, the female officer put in charge of the Alliance after Leia's sidelined, but neither the characters nor the actors have any chemistry. (The costume department can take the blame for the way actress Laura Dern looks like she just walked in from a spring cotillion.)  Holdo's presence has sparked some critics to cite her as a feminist prop, and this is probably true. But there's nothing in the plot that would've been improved had her character been a grizzled old male general.

Finally, Johnson makes the cardinal mistake of a writer who doesn't respect the universe he's been hired to work with: he makes promises he doesn't keep. For most of the film, the Alliance is seeking a base to escape the Order. The audience thus has the right to expect that the good guys will get some sort of respite, even if it's not precisely what they might have anticipated. Instead, by film's end the Alliance finds a base, but the Order locates them and tries to blast them out of it. Luke Skywalker sacrifices himself to make sure that the Alliance escapes-- and so the good guys are just back where they started, on the run again.

In my review of FORCE AWAKENS, I said that in terms of Abrams' setup, Kylo Ren could be "the symbolic offspring of the Luke-Leia-Han triangle." I doubt Johnson perceived that potential either, but at least the extensive scenes between Kylo and Rei don't mitigate against having someone else developing the characters better. But aside from one kickass fight-scene, in which Kylo and Rei decimate the Crimson Guard, Kylo's just a necessary plot-point for Johnson, a "whiny Anakin" who has no particular reason for being whiny or for being murderous-- or even for existing at all.

Posted by Gene Phillips at 12:04 PM
Email ThisBlogThis!Share to TwitterShare to FacebookShare to Pinterest
Labels: combative adventures, the marvelous