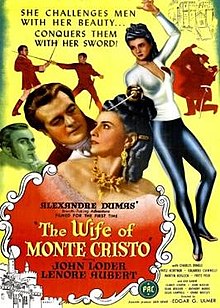 
One often hears about B-movies being crafted quickly to catch fire from A-films that proved popular with the public. However, Hollywood's first major sound adaptation of Dumas's classic novel THE COUNT OF MONTE CRISTO became a bonanza for B-movie productions, even many years after the 1934 film had left theaters.

Admittedly, producer Edward Small, who worked on both the original COUNT and two sequels, must have demonstrated the resiliency of the concept, since he produced both 1940's SON OF MONTE CRISTO and 1946's THE RETURN OF MONTE CRISTO. All of these were resolutely naturalistic like the book, but the studio PRC chose to cross-breed their version of the Count with the still popular "Zorro" template-- so that even if WIFE OF MONTE CRISTO was intended to dovetail on RETURN, it was also set apart from being strictly in the Dumas tradition.

That tradition does not, to the best of my knowledge, include any female swashbucklers, though the titular character of WIFE is loosely based on a Dumas character named Haydee. Dumas's chronology for the character is re-arranged so as to imagine that Edmond Dantes (Martin Kosleck), rather than using his money to ruin his enemies, dons a mask and takes the name of "the Avenger" as he rides around fighting evildoers. However, he's injured in one of his forays, and Haydee (Lenore Aubert) dons his outfit in order to keep the Avenger's enemies from suspecting Dantes' dual identity.

Despite the emphasis on Haydee in the advertising, she never seems like anything but a support-character in the story of Dantes. She has one scene of minor swordplay, but Kosleck's Dantes, despite not being as handsome as most swashbuckler-heroes, gets the privilege of the final duel with the bad guy. Edgar Ulmer, though known for having produced some gems on a budget, merely turns in a routine outing here. 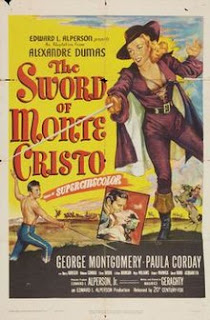 In contrast, THE SWORD OF MONTE CRISTO was the first directorial work of Maurice Geraughty, who had enjoyed a long career writing serials such as PHANTOM EMPIRE and UNDERSEA KINGDOM. Unlike Ulmer's production, SWORD really sells its female swashbuckler, whose adventures begin in the 1850s, roughly twenty years after the supposed career of Edmond Dantes. She, a noblewoman named Lady Christianne (Paula Corday), is also a masked avenger, though in contrast to many other Zorro-imitations she's seen at the very start of her career, helping Parisian rebels against the tyranny of Louis Napoleon (or, rather, his nasty advisers). Because she's masked, many soldiers mistake her for a man, and give her the name of "the Masked Cavalier." A noble young officer named Renault (George Montgomery) attempts to hunt down this enemy of the Crown, only to side with the Cavalier once he realizes the justice of her cause. In addition, Christianne and Renault enjoy some romantic moments on the way to reforming Louis Napoleon's regime, and as a result I would describe their characters as co-stars, wherein neither is more important to the narrative than the other. Admittedly Renault gets to swordfight the main villain, though Christianne's final battle is more memorable, given that the henchman she kills is a very young William Conrad.

Posted by Gene Phillips at 2:43 PM
Email ThisBlogThis!Share to TwitterShare to FacebookShare to Pinterest
Labels: combative adventures, outre outfits (u), the uncanny