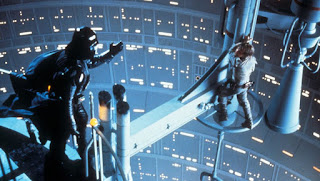 
I don't know why I've been so dilatory about reviewing the STAR WARS films, but of late I'm motivated to get them all done in a bunch, the better to have greater perspective when I see the putative last film in the "Disney Wars" trilogy.

In my 2016 review of STAR WARS, I called attention to an element I don't think many reviews have chosen to analyze: that of the audience's identification with a deeply spiritual (if fictional) religion which has been wiped out by an "evil empire." And  even though Lucas originally intended to farm out his franchise without closely supervising it, he and his collaborators ended up building up the Jedi mythology far beyond the sketchy outlines seen in the first film. Co-scripter Lawrence Kashdan allegedly was responsible for importing terms like "allies" and "luminous beings" from the then-popular mystical biographies of Carlos Castaneda. But Lucas wrote the earliest version of EMPIRE's script, and the result of his oversight provided an almost seamless development of Luke Skywalker's "hero's journey" as begun in the first film.

EMPIRE's opening crawl takes the viewer far from the triumphal ending of STAR WARS, explaining how the vastly outnumbered forces of the Rebellion have been hounded to the far corners of the cosmos by Imperial counter-insurgency. The Empire is now led by Darth Vader, who for the first time is seen conferring with "the Emperor," only briefly mentioned in the first film. In STAR WARS Luke is essentially a wild card, who comes out of nowhere to show off Jedi skills that undermine Vader's defense of the Death Star. But now both Vader and the Emperor are less concerned with breaking up the Rebellion than with finding Luke and converting him to "the dark side." Luke, having fled with his friends to a frozen ice-world, has his own encounter with darkness, almost dying on a frozen snowscape-- which leads him to have a close encounter of the spiritual kind with the ghost of Obi-Wan Kenobi. Kenobi instructs Luke to seek out the great Jedi teacher Yoda on another planet, and such is Luke's respect for Kenobi-- who was only his mentor for a few days at most-- that Luke departs from his fellow rebels without letting them know his plans. Strangely, though the film starts out by establishing the intense personal bond between Luke and the other members of the ensemble-- Han, Leia, Chewbacca and the two droids-- none of the other members are heard
showing concern about the mysterious errand of Luke and R2D2. Maybe Lucas meant to suggest that they were just too busy fleeing the Empire to be worried.

The arc of the other "star warriors" is almost entirely defined by their flight from the enemy, aside from the subplot regarding the romance of Han and Leia-- and that plot-thread has been re-worked to de-emphasize the trope of "two guy-friends fighting over the same woman." Only the teasing "Leia kisses Luke to make Han jealous" scene even conjures with the original trope, and it's probable that by that time Lucas had decided that Luke and Leia would become siblings, even though the film ends without actually disclosing that relationship. To be sure, when the film ends with what was then
moviedom's longest cliffhanger-- with Han being frozen in carbonite and en route to a death-sentence-- Luke and Leia appear in the final scene together, with the former letting his arm rest protectively over Leia's shoulders. Was Lucas hedging his bets in case the recalcitrant Harrison Ford refused to return for the following film? The world may never know. Yet it's perhaps also no coincidence that Lando Calrissian, "the new scoundrel in town," not only shares Solo's attraction to Leia but even wears Solo's outfit in Calrissian's final scene.

But Vader's only after the other star-warriors as a means of drawing Luke to him. From the first scenes it's obvious that the Sith Lord has some empathic connection with Skywalker, yet he can't ferret Luke out on Yoda's world. There the youth is put through his paces by the 800-year-old green dwarf, and Luke again gets a brush with ultimate darkness when he enters the alien world's equivalent of Tolkien's Mirkwood, a malign cave where the hero meets the darkness in himself. But even though Darth can't find Luke, Luke is bonded enough to his friends to know when they're being tortured by his enemy, the supposed killer of his father. Both Yoda and the ghost of Kenobi warn that there may be dire consequences if Luke lets himself be guided by emotion, since this will interrupt his training as a Jedi. Even before one learns EMPIRE's Big Reveal, for the first time the two Jedi lose a certain amount of audience sympathy, given that they're apparently willing to let Leia and the others take a dirt nap in order to mold Luke into the perfect Jedi warrior.

The third film pretty much ignores this dramatic set-up, but to the dedicated fan, the Big Reveal offers enough dramatic punch to compensate. Indeed, for some viewers the question "Ben, why didn't you tell me?" may have been a far greater cliffhanger than the fate of a carbonized Corellian smuggler. The follow-up film doesn't deliver on this question either, but Luke's moral agony-- not only from being related to a vicious killer but from having been manipulated by his teachers-- contributes to a helluva "dark night of the soul." I wish that RETURN OF THE JEDI had delivered on the sublimity of EMPIRE, but I suppose that a play with two superior acts and a so-so final act is still a damn good play.

Posted by Gene Phillips at 2:34 PM
Email ThisBlogThis!Share to TwitterShare to FacebookShare to Pinterest
Labels: combative adventures, the marvelous