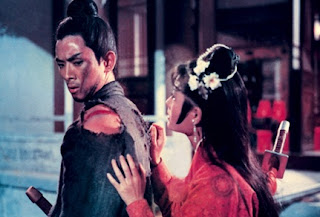 
So far almost every Hong Kong martial-arts film I've reviewed has earned only a "fair" or a "poor" in terms of mythicity, so at one point I wondered if any films from this period and locale could impress me in that respect. Happily, Chang Cheh's 1967 ONE ARMED SWORDSMAN scores high in that department, in addition to being the film that launched a new phase of *wuxia* movies.

The sociological matrix of the medieval hero's existence is given far more conspicuous attention than one sees in even the better chopsockies. When bandits attack the sword-school of Master Qi, one of his servants gives his life to preserve the master. The aristocratic Qi returns the favor by swearing to raise the servant's son Fang Kang as Qi's own child. Years later, Fang (Jimmy Wang) has reached young adulthood, as well as becoming Qi's only outstanding sword-pupil. Qi, whose only true offspring is his spoiled daughter Chi Pei, fantasizes that the two young people may even marry despite having been raised as technical siblings, so that Qi's art will be passed on, even through a peasant's bloodline.

However, though Chi definitely wants Fang, he wants nothing to do with her-- less because of their familial relationship than because he sees her as a spoiled twerp. Other aristocratic students despise Fang because he comes from nowhere, but Chi wants him simply because he's hard to obtain. She challenges Fang to a sword-duel, but because Fang respects his master/father, he refuses. She manages to provoke him into a hand-to-hand fight, where it's clear that she has no game whatever, and when she gets frustrated, she snatches up her sword and slices off one of Fang's arms. (Insert Freudian interpretation here.) Fang flees, but pain and blood-loss cause him to pass out. A peasant farm-girl, Xiao Man, brings him to her home and nurses him back to health. Xiao is Chi's opposite not just in terms of class but in terms of inner nature: though humble, she wants to live a simple existence far from the world of sword-duels. Fang tries to join her (though I don't believe the two of them are seen to marry). Yet when he learns of a threat to his surrogate father, Fang forces himself to master a one-armed sword-style to rescue Master Qi. However, after completing this obligation, Fang returns to Xiao's bucolic life.

The success of the 1967 film made it impossible for Fang to remain down home on the farm, but Cheh's sequel does at least keep the basic rudiments of the swordsman's antipathy to the life of violence. However, there are numerous sword-schools that are aware of Fang's impressive past deeds, and these students turn to Fang for help when a criminal gang, the Eight Warlords, tries to intimidate all rival schools.

Though Fang's one-armed swordsmanship is as naturalistic as before, a number of the Warlords wield bizarre weapons, making RETURN a film of uncanny phenomenality. For instance, "Thunder Blade" sports a sword that can shoot smoke-weapons, "Mighty Blade" is really strong and wields an oversized sword, and leader "Unseen Blade" wields a collapsible sword. However, though RETURN has a lot of bloody battles, I didn't think Cheh succeeded in exploiting the superhero-like charm of these gimmick-laden battles. Still, the integrity of the characters of Fang and Xiao is maintained. Though Wang later played other one-armed characters-- not least the one mentioned in ZATOICHI VS. THE ONE-ARMED SWORDSMAN-- happily Fang and Xiao are allowed to go back to their lives, and even Chang Cheh's one other sequel, NEW ONE ARMED SWORDSMAN, chose to make up a new hero instead of compromising Fang Kang.

Oddly, though there are no references to Qi and Chi from the first film, Chi's nastiness is replicated in "Thousand Blade," the one female member of the Warlords (Essie Lin Chia). Though she's not Xiao's rival for Fang as was Chi, Thousand Blade still incarnates the evils of feminine duplicity, for this Warlord specializes in beguiling her male victims with her beauty and then stabbing them with one of her many hidden blades. Though she meets the same fatal end as the other Warlords, she gets much more screen time than any of them, or anyone besides Fang Kang.