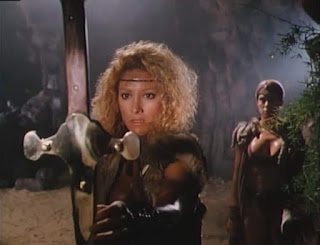 
AMAZONS is a fairly straightforward sword-and-sorcery opus. The evil sorcerer Kulongo harnesses the power to shoot lightnings from his fingers. But since he knows he can increase his power even more by acquiring a magical stone from the city of the Amazons, he sends his army to raid said city. The Amazon queen sends the stone away with two of her best warriors, Dyala (Ty Randolph) and Tashi (Penelope Reed). However, Kulongo has an "inside man," or rather Amazon, who happens to be Tashi's mother Tashinge (Danitza Kingsley).

That's pretty much all the plot one gets, as Dyala and Tashi encounter an assortment of perils on their errand, which also comes to include seeking out a magic sword. I think I may have read the short story on which the film was based, but writer Charles Saunders probably had to add a lot of incidental action to pad out the movie, so that short story and film may not have a lot in common.

The good news is that AMAZONS is unapologetic in offering "babes with blades," in that Dyala and other Amazons run around in rewardingly skimpy outfits. Ty Randolph doesn't have nearly as much charisma as earlier cinematic swordswomen, such as Sandahl Bergman and Lana Clarkson, but she handles her fight-scenes with a lot of energy. Both Tashi and Tashinge are even less developed as characters, though at least the script attempts to forge a gal-pal friendship between Dyala and Tashi. Indeed, after Tashi is (temporarily) killed, she only gets to come back after her mother, the evil power behind her, is slain.

The closest thing to a mythic conceit is that Dyala is somehow mystically bound to a particular tree, and is almost killed when Tashinge tries to cut down said tree. But the script doesn't build up this concept and so the conceit seems to come out of nowhere. 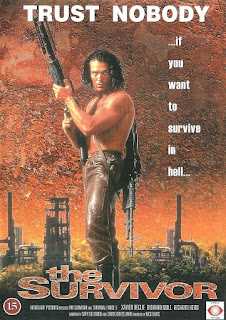 In my review of GALAXIS, I mentioned that its writer re-used some of the names from that film for 1998's SURVIVOR. This is little more than a somewhat lively swipe from 1981's ESCAPE FROM NEW YORK. though this time it's the whole planet Earth that's been designated as a convict-colony after all the "good people" emigrate to other worlds. However, as in ESCAPE a high official-- another President, no less-- crash-lands on Earth with his entourage. The villainous Kyla (Richard Moll) tries to acquire a deadly pass-code from the Prez in order to gain free passage off the prison planet, and the only man who can stop Kyla is Tarkin-- who's explicitly compared to Tarzan for no good reason.

Once again the action-scenes are the flick's only selling-points. Oddly, though Tarkin gets into some fights, the standout scene appears when a tough lady named Devin goes hand-to-hand with a grotty tribesman. She also gets to kill the main villain, so that Tarkin comes off as being even less than a second-rate Snake Plissken.