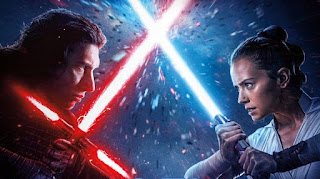 
RISE OF SKYWALKER appeared in theaters about a week ago, and critical verdicts range from "boring and conservative" to "a return to true form" (my paraphrases). I hew closer to the latter, though I suspect I'm the only reviewer who'll be pleased that director/co-writer J.J, Abrams discovered his "true form" by returning to the metaphysical domain of the Lucasverse long after Lucas pretty much dropped the matter (as I mentioned in my review of RETURN OF THE JEDI).

I'll note that myths of the metaphysical always make some appearances in all of the movies, since the fate of the Jedi and their war with the Sith often parallels developments in the sociopolitical sphere of the laity. However, Lucas displayed precious little fascination with the complexities of the Force in his "prequel trilogy," and if anything he began emphasizing myths of the psychological domain, as per Anakin's Oedipal complex. The now-complete "Disney Trilogy" has little to say about the sociological forces that informed the rise of the First Order, but rather puts the blame back on the universe's incarnation of Sithian evil, the recrudescent Emperor Palpatine. (Side-note: SKYWALKER seems to be the first film to mention that the Sith once controlled the universe before the Jedi Knights defeated them. Or at least it was news to me.)

Now, though I believe that Abrams sought to promote psychological myths in FORCE AWAKENS, that doesn't mean I think that he always did so successfully. Though Abrams was known for bestowing complicated backstories upon teleseries characters like those of LOST and ALIAS, he seems to have kept psychology to a minimum with the central characters introduced in his first SW film: Rey, Finn, and Poe. Similarly, even though both AWAKENS and LAST JEDI emphasize the crucial role of main villain Kylo Ren, neither these films nor SKYWALKER give the viewer any meaningful details about his antipathy to his parents Han and Leia, to his uncle Luke or to the Light Side of the Force. The trilogy uses Kylo's animus as a catalyst that, in one way or another, dooms Han, Leia and Luke, effectively making way for the new characters while allowing a couple of old-timers-- Chewbacca, Lando Calrissian, and the robots-- to function as support-types.

Yet, though Rey isn't given a solid characterization in the first two Disneys, she does have a character arc not given to either Finn or Poe. As soon as renegade Kylo Ren encounters Rey, it's clear to every SW-savvy character that he's going to seek to convert her, as Palpatine successfully swayed Anakin Skywalker and as Anakin, in the guise of Darth Vader, failed to suborn Luke Skywalker. I suspect that Abrams may have formulated some specific ideas about Kylo's personal motives, and that Disney executives didn't want to delve into LOST-style psychodrama, so that in a psychological sense Kylo appears half-formed at best. However, Abrams does succeed in making Kylo a metaphysical complement to Rey, particularly when Kylo himself tells Rey that they comprise a "dyad," like the two sides of the Force. This yin-and-yang unity, though true to some of George Lucas's real world inspirations for the fictional Jedi, resembles nothing in the way Lucas treated the interactions of Palpatine-Anakin and of Vader-Luke, where it was clear that one character would dominate the other. Kylo, in his ceaseless attempts to draw Rey into his sphere, seems to be seeking some deeper consummation. To be sure, Abrams backs off on making the sexual aspects explicit, save for a suggestive final kiss between young Jedi and young Sith as the latter is about to perish.

Outside the drama of Jedi and Sith, the activities of the Rebels seem far less consequential, though at least this time the good guys are given something positive to do, in contrast to the endless retreat-action seen throughout LAST JEDI. With little or no foreshadowing, Emperor Palpatine returns-- and though his re-appearance strains credulity, at least the explanation-- that he's used arcane science to preserve himself for a few decades-- mirrors George Lucas's distaste for characters "more machine than man." It's revealed that Palpatine was the power behind Kylo's tedious master Snoke, and that (surely everyone knows it by now!) he's also Rey's grandfather, though the movie devotes nearly no time to the identity and nature of her long deceased parents. This might be seen as a logical development of a Lucas-trope that's presented obliquely in REVENGE OF THE SITH, wherein Chancellor Palpatine alludes to the possibility that a Sith-lord, possibly the Chancellor himself, manipulated the birth of Anakin Skywalker through a high-tech replaying of the Christian Annunciation. Thus Palpatine's physical relationship to Rey parallels his metaphysical relationship to Luke and Leia-- which may be what Abrams found most engaging about the STAR WARS saga. At very least, someone in the production chose to have Rey played by an actress who looks like the love-child of the Skywalker siblings.

Abrams and his co-scripters manage to work in a certain amount of sociopolitical material into the conclusion, basically a variation on Lucas's "lots of little good guys can beat up one big bad guy." Finn, boring character though he is, does get to encounter a fugitive former Stormtrooper like himself. And since fugitive Jannah is played by a black actress, this in turn reinforces the loose "African Diaspora" theme I referenced in my review of FORCE AWAKENS. But even the equally boring character of Poe, who doesn't get an arc, takes on a certain gravitas thanks to all of the lively action going on around him. The production team does a far better job with the FX than one sees in either of the earlier "Disney Wars" installments, though I'll add the caveat that at no time do they manage to duplicate the appeal of the original trilogy.


Posted by Gene Phillips at 1:37 PM
Email ThisBlogThis!Share to TwitterShare to FacebookShare to Pinterest
Labels: combative adventures, the marvelous