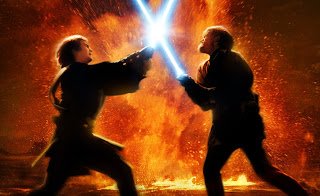 
George Lucas's prequel trilogy follows much the same trajectory as the original one, where a relatively strong first and second act are concluded by a weak third act. That said, for all the inevitability of REVENGE's conclusion, it's considerably stronger than RETURN OF THE JEDI.

For one thing, REVENGE at least builds on all the concerns brought forth in PHANTOM MENACE and ATTACK OF THE CLONES. There's no shift in focus as there is in RETURN, wherein Lucas turned his back on a number of the plot-and-character concerns introduced in the first two parts of his narrative. Lucas even makes some effort to build up his Jedi mythology, contrasting the Jedi way of selflessness with the Sith preference for self-glorification and the betrayal of even the most faithful allies. Still, the main focus of REVENGE is still less concerned with the battle between different aspects of the Force, and more with the way worldly dictators mask their self-aggrandizing projects through appealing to the public's desire for safety and security.

One major aspect of Jedi mythology Lucas neglects is the vague prophecy that causes Qui-Gon Jinn to enlist Anakin Skywalker in the first place. Yoda, at least, considers the possibility that the prophecy has been misinterpreted, though he doesn't see the serpent in the garden any more than anyone else in the Order. The attitude of the other Jedi toward Anakin is never as clear as it should be. Are they condescending toward him simply because of his extreme emotionality, or do they resent what he represents? He's touted as a Messiah who will deliver their civilization from the Lords of the Sith, who are finally said to have once ruled the cosmos before being defeated by the Jedi in some other epoch, and that may be on some level the sort of thing that goes against the grain for an order that has become too "self-satisfied." Perhaps this is why, even if they dismiss the possibility that Anakin may be another Messiah, they cannot foresee that he may become an anti-Messiah-- much less that he's also destined to give rise to the Real Thing.

The matter of Padme's newly announced pregnancy seems to fit Palpatine's grand design perfectly, for the marriage of Padme and Anakin has been concealed from the Jedi, and newborn children have a way of blowing such secrets wide open. Significantly, though Padme talks about having the child (whom the audience knows will actually be twins) in seclusion, the very existence of a Jedi offspring puts Anakin's priestly status in question. Both parents are sure that Anakin will be expelled from the Order if the truth is revealed, but Lucas stacks the deck somewhat in that neither even considers that they might just 'fess up, leave the political sphere, and go off to themselves. Patently Anakin has ties of loyalty to the Jedi, despite his many conflicts with their dismissive ways, and apparently Padme takes her cue from him, even if she doesn't have the viewing audience's perspective on the young padawan's father-issues. Interestingly, while Obi-Wan Kenobi often takes a paternal attitude toward youthful Anakin in CLONES, in REVENGE the two of them interact more like siblings, and toward the end Kenobi even characterizes Anakin as his "brother." The opening sequence pits the two Jedi against their continuing enemy Count Dooku and new villain General Grievous (otherwise known as "Darth Vader writ small"), who have apparently kidnapped Chancellor Palpatine. In truth the whole kidnap-plot seems designed to put Palpatine into a position where he can continue to mold Anakin's sense of ethics. The concealed Sith does indeed succeed in enjoining Anakin into killing the vanquished Dooku, though Palpatine doesn't succeed in getting the young Jedi to desert his imperiled "brother."

With no viable father-images available among the Jedi, Anakin proves vulnerable to more psychic manipulation from the Sith Lord, this time playing upon his fears of losing Padme the same way that he lost his mother. Having insinuated himself into Anakin's consciousness, Palpatine finally drops the other shoe as to who fomented Anakin's virgin birth-- though Lucas's explanation is curiously oblique as to how the birth of the anti-Messiah was managed. Then Palpatine plays his master stroke, revealing his Sith nature to Anakin. Anakin doesn't immediately forget his loyalty to the Jedi Order, for he reports the Chancellor's revelation to Mace Windu. Palpatine even puts his own life in the scales during a battle with Windu, and the villain manages to merge the youth's burgeoning trust in Palpatine with his fears for Padme's survival. Thus Anakin finally betrays his perceptors, and this sets up the Jedi and their allies for wholesale slaughter-- including a murder of several padawan children that bears loose similarity to the Christian "slaughter of the innocents."

What makes REVENGE weaker than its predecessors is the sheer inevitability of almost everything that follows. ATTACK OF THE CLONES also suffered from Lucas's tendency to tick off his necessary plot-points, but the ambition of the writer's historical panorama gave the Sith Lord's schemes a tragic dimension. In REVENGE, it's all about Anakin, and more than one critic has deemed the young Jedi to be irredeemably whiny. Despite the attempts to give the young man's temptation some psychological heft, his conversion to the Dark Side doesn't take on mythic dimensions until the conclusion, when Kenobi duels Anakin in a flaming volcano, Lucas's stand-in for the hell within the former Jedi. As a result, Anakin loses much of his real body as well as his soul, and his final transformation into the half-mechanical Darth Vader-- skillfully intercut with scenes of Padme giving birth before she dies-- have much of the resonance of the original FRANKENSTEIN films.

Despite my reservations about REVENGE, I reiterate that for all the shortcomings of the prequel trilogy, I'm glad that Lucas made even an imperfect attempt to extend the scope of his fictional universe. The prequels didn't succeed i creating a cast of characters that the world embraced as they did from the original trilogy. But in terms of expressing the full range of Lucas's creativity, both good and bad, the prequels are practically a godsend.

Posted by Gene Phillips at 2:26 PM
Email ThisBlogThis!Share to TwitterShare to FacebookShare to Pinterest
Labels: combative adventures, the marvelous